Check out these listings:

@Frank Ian Bocal One or more of your recent Discussions polls have been removed due to violating the poll guidelines. Please take some time to review the rules as further infractions may result in a temporary ban.

Fake. We only Discuss our annual user purges in our private Discord. We stopped using the hidden admin board before I even became an admin.

@Foxes Trail 109 Please don't make "who would win" polls. It is against the rules.

A reply to Alexander Overbey
0

"Then what's this fandom for if you don't have the most recognizable creepypastas like JTK, Slenderman, Tiki Toby, and Clockwork. I don't see purpose in this fandom."

Sally and Clockwork aren't that well known. They are popular with a specific subset of the creepypasta fandom but aren't really famous in their own right, compared to say Jane the Killer or Squidward's Suicide.

Same with Ticci Toby, he is popular with the Slenderman fandom, but not so much the creepypasta fandom at large.

(Also apparently the creator of Ticci Toby requested that the character be completely scrubbed from the fandom recently. Not that we really care.)

Jeff the Killer was removed for both for being very bad, and because having it on the wiki kept attracting knockoffs.

We did not remove stories like Squidward's Suicide or Slenderman, despite them being of questionable quality by our contemporary standards, because we did not have the same issues with them as RedNovaTyrant alluded to.

While you're here, I may as well run down some of the other popular pastas we don't have:

Sonic.exe - Removed for being obscenely terrible and attracting tons of terrible knockoffs, same as JTK.

Happy Appy - Removed for being even more obscenely terrible to the point where many thought it was a trollpasta, and also because the author specifically requested it be removed from the wiki. Also, that one actually originated on this wiki, so we weren't out of line to remove it. Same with Sonic.exe actually (it either originated or first got popular on this wiki)

The Expressionless - Removed for licensing issues.

Abandoned By Disney - Removed for licensing issues. Previously this wiki was permitted to host stories under multiple licenses, but then Fandom changed their mind and we were forced to delete all stories that aren't CC-BY-SA or public domain. Abandoned By Disney was under an incompatible license so we can't host it.

Funnymouth - Written by the same author as Abandoned By Disney, so same story.

Jane the Killer - If we don't have canon Jeff, we're not gonna have Jane.

Eyeless Jack - Removed by request of the author after he/she agreed that it was terrible.

1999 - Removed directly by Fandom/Wikia itself after the author filed a DMCA claim (and also, we were about to delete it anyway after it was revealed that the author plagiarized a chapter from an ARG)

Cosplay is allowed as long as it's not sexual or gory.

Also psst hey, is that your artwork? It needs to be under the Art board if it is, and if not then please remove it.

Gonna go ahead and lock this thread as the conversation is starting to derail.

Be nice people. There's no rule against having an unpopular opinion, but the OP also needs to be less defensive.

@NerdxCorexCreep Don't post stories in Discussions, these are considered blogicles and are against the rules.

Cleverbot is programmed to regurgitate whatever data it gets from people. Since people have been feeding it BEN Drowned for a decade now, that's what you'll get from it.

Gonna go ahead and lock this to keep yall from stepping over the roleplay line.

A reply to Alice Samanta
0 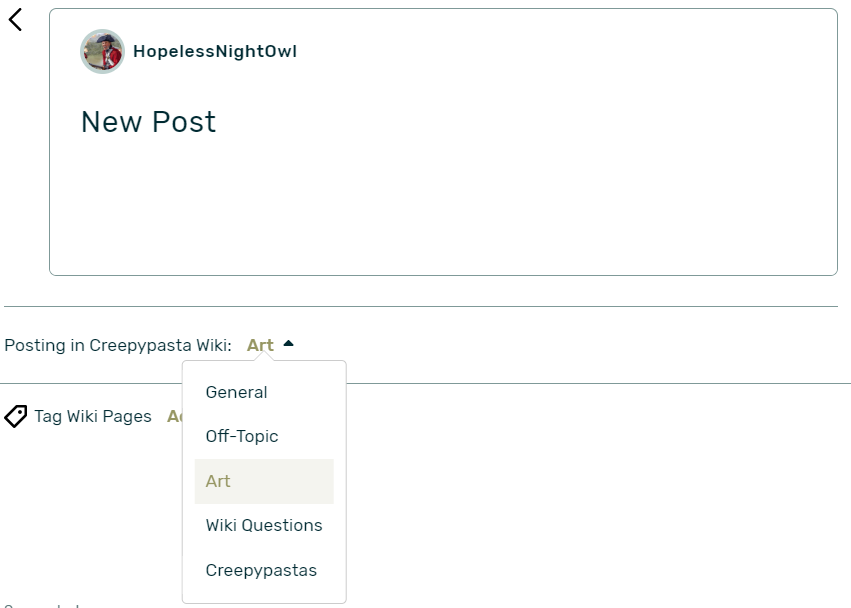 In the future please put all artwork under the Art board tag.

A reply to Alice Samanta
1

We can's stop you from making this channel, but be aware that any discussion of creepypasta entities being real on this wiki will run afoul of our rule against roleplaying.

I'd recommend approaching it more from the angle of looking into the general background and history of known creepypastas.

Cosplay is welcome, just make sure it's in good taste and put it under the Art board tag.