Greetings, my "name" is Nicholas. But you can just call me Nick.  The beauty of life is something to take advantage of and to benefit the world.  I'm an archivist for a VHS & Forgotten Media group.  We've recovered just over 1,300 different files. Our oldest file is from 1956.  But we're not here to talk about that one.

We're here, to tell a tale, a fantasy, something old, yet revolutionary, only able to have been created by the unforeseen forces of insanity.  Let me explain some background details.

Thirteen hundred files is just an estimate, our true number of files is 1,342.  Each tape, image, or lost media is assigned a code.  For example, our 300th file, "Wally's Amazing Adventures!" from 1978, is assigned the code name W300.  The first letter of a file's name and the number it is placed as are combined to create a secure, yet simple "folder."  Currently, our latest file code is J1342.

But there WAS another file.  This is where we begin the tale of a man who made a life-changing choice, and a tape with no sense, no morals, and yet a story was present.  Let's rewind 3 years ago when a man named Mark H. Junior was recently promoted to the rank of VHS Tape Analyst.  The basic job of this rank was to document a tape, simple as that.

He was a tall man, not a modern Abraham Lincoln, but taller than average.  He was very depressed, with sunken eyes so deep I thought it was some twisted birth defect. He may have had the looks of a depressed person, but his inner self was a cheerful child to be honest!  He would get at least 3 pizzas for the entire group during our only 30-minute break.

One day, another co-worker, Kelly Sanders, found an old cassette tape in her old grandfather's attic.  It had no title.  Just a red streak across where a title should be.  Curious, Kelly asked her grandfather if she could have it, and he happily obliged.  Well, Kelly says that, because the poor guy, can't talk.  He hasn't talked since 2014.  I suspected he always had serious dementia, but Kelly says he just went mute.  Not from some serious accident, but he just stopped talking one day after watching some cartoons.  It's hard to understand.  I mostly chalk it up to Kelly being a prankster. She is good at pranking us in the studios.  She handed the tape, which was nicknamed, which, fun fact, was the first time this had ever happened, "A Blank Slate."  It was put in a small drawer, near the Analyst room.  4 days after being turned in, Mark was assigned "A Blank Slate."  He calmly walked up to the big, red sign as he went inside, cassette in the right hand, notepad with pencil included in the left one.

It was his 25th time documenting a short.  He was a great employee!  Always on time, never tardy, and excellent notes.  He viewed the tape, and around 15-18 minutes later, he returned and said, "Well, this is quite a shocker, but, the tape, is completely blank."

The Head Analyst, Johna, decided to digitize the tape to find something in any frame.  Once a digitized copy was made, she realized, there was an outline of a person. It was very faint but noticeable.  It looked like Mark in the Analyst Room.  Johna, now realizing there was something on the tape, decided to review it.  The tape, now showed an exact, photo-realistic image of Mark.  Johna got Mark to review the tape, but Mark only saw, a white screen.  Keep in mind, they both viewed it at the same time, and yet they got different results.

Mark was convinced this was some prank.  He marched out of the room, but, Johna was a pale corpse.  Her expression was frozen in fear as her eyes revealed Mark's fate.  The VHS Tape played a gruesome, yet almost comedic scene.  Mark was tied up in a wooden chair, his nails gone, his eyes stitched together, his ears cut off, and throat slashed to bits.  You could tell he was attempting to scream, but it came out as a painful moan of agony.

Johna committed suicide at her apartment that same night.  At a small memorial service we held for her, we noticed Mark was missing.  A whole week later, the police discovered his corpse at an abandoned Warehouse tied to a wooden chair,  his features the same as in the tape.  After higher executives revealed this, we burned that tape, hoping to never see it again.

Fast forward 6 years later, I was looking for a present for my niece in LA.  I got to a thrift store where I found it.  The same cassette tape, red streak, damaged, and old.  I purchased the tape, loaded it in my cassette player, and saw myself.  It started as an outline, then a photo-realistic photo of me in my niece's house.  I unloaded the cassette tape, and brought it with me along with a teddy bear for my niece.

Four hours into her birthday party, the adults left to go outside.  My niece and I were the only ones inside.  As I was there, I reviewed the tape but was quickly called outside for the feast.  My, poor niece must've seen it because, she stabbed herself 25 times in the stomach.

When I came back, I found her in a pool of blood.  I called 9-1-1, and they arrived shortly after.  As she was being pulled onto the stretcher, family mourning this horrific ordeal, she whispered two separate names. "Johna, Mark."  I bellowed in madness as I ran to the nearby forest.

Why was I so stupid? Why did I bring it back?  They found my corpse, hanged from an old oak tree.

This is a tale, one that continues forever, your fate was the same as all the other 531 victims this thing had collected.  My niece, me, Mark, Johna, and you.  We are all in endless agony, unable to save the poor future victims.  We try to give them warnings, but they end up piling, or most hanging. I'm so sorry everyone. 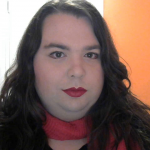