Back in the spring of 2012, I was visiting some family over in Boston. I usually don't visit them around this time of year, but I decided it would be fun to surprise them. Anyways, I live in Detroit, so I realized I should probably take a flight out; but I don't get paid much working at this steel mill in Ohio, and I am absolutely fucking terrified of flights. I decided a buddy and I should take a ride out to Boston. He had a Prius so the trip wouldn't cost much for him. He's never met my family, so he agreed to driving me. I told him I would pay him back in full for the gas, because I felt like shit for bumming a ride off of my friend.

Sorry for that little info dump, but I felt it needed to be said.

Anyways, We were taking a route through Pennsylvania that I don't feel like describing because it was long as shit and I don't remember it. One thing I do remember (and frankly I don't think I'll ever forget) is when we stopped to use the bathroom in New York. It was a regular, shit-stained bathroom. There were a few questionable stains here and there, but we just decided to brush it off and get something to eat.

On our way out of the gas station I noticed an older map, dating back to around 1965. I noticed there was a small back-road that actually looked like a shorter route to Massachusetts. It looked like it would cut through the woods and into a small town. The town name was not listed on the map, but as long as it was faster, I thought we should take that route. I showed the route to my friend and he was not too reluctant in taking it because it was starting to storm and if the town had a motel he was fine with it. He’s usually pretty terrified with storms.

So after buying a bag of Combos, some colas, and a bag of Doritos, my friend and I happily got our asses back on the road. On our way we began to pass through a small forest. We noticed that the trees had no leaves. Like, not as if the trees were all dead or if it were fall -- they looked as if they were all burned, like if there was a huge forest fire or some shit. As we traveled deeper into the forest we began to question whether we were taking the right route or if we should turn around whenever we got the chance. Another weird thing we noticed was this terrible smell; it was like the smell of a dead skunk, where you can still smell the regular skunk smell, but there’s also the scent of rotting flesh. The smell was actually strong enough to make me gag.

We kept driving (probably a good 30 miles over the speed limit) until we finally passed an older looking sign. It had some faded lettering on it but you could still see them; “Welcome to Knowhere!” The sign made me laugh a little because of the faint dark humor. It really was nowhere; I mean, so far there was nothing but dead trees. As we passed the sign though, the gross ass smell went away and our radio went out. Like it did not just gradually turn into static, it just turned instantly to static and our radio shut off by itself. My friend said that kinda shit happened when we would go passed areas at the steel mill. Some shit to do with the large magnets we use to lift the iron, but that would mean we’d have to be near a steel mill, or a huge ass magnet. Either one would be kind of weird to encounter out here, because it was such a small town.

Anyways we continued on but as we did our desire to leave the town and turn around started to grow more intense. This town just had this strange feeling that made our paranoia spike through the roof. We decided it was time to get the fuck back on the highway.

So, as we’re pulling into a driveway something dawns on me -- there has been absolutely no one throughout this town. We thought the town might be abandoned or something because all of these buildings were in horrible condition. But the lawns seemed to be too manicured, and some buildings had lights on. I also noticed that there were cars all around this place. Some looking like the town, others looking like they were right off the assembly lines. At this point in time I told my friend to move the fucking car. I wanted out of this fucking town. But he was leaning out the car window, taking a picture with his phone of something.

So, I asked him what was he taking a picture of. He said he was just photographing the sky. It had just stopped raining and it seemed like there was a ring of storm clouds around us. The sky had that cool evening look to it, you know? Like that weird orange-ish purple color? So, after taking a few pictures we went and looked at one of them. I’ll have them posted but when we saw the first picture we thought it was a small technical error...like his hand was shaking cause you know, it kind of looked like he was shaking the camera.

All of a sudden, the storm started to come back in so we decided to roll up the windows of the car and get the hell out of there.

It was like an air-raid siren, but it sounded as if it were distorted by large buildings. I had been to Chicago and their air-raid sirens were sometimes broken but they echoed off buildings. So this town’s sirens sounded like this:

At this point me and my friend were trying to just start the fucking car, and get the hell out. He turned the key but the car told him the battery was dead. We realized we were sitting ducks in the position we were in. At this point the siren had stopped but the rain had started up again. We just sat in his car. Waiting for the rain to stop so we could walk back to the gas-station and get someone out here to help us. My friend was taking pictures with his phone again when we noticed that our phones were fucking up on reception. Probably due to the same reason that the radio shut off. That’s when we looked through his pictures more. Same problem again -- all of them were blurry as shit but that is when we noticed figures in the blur. I have circled them for you.

When we saw this bullshit we knew it was time to man the fuck up and walk to the fucking gas-station, rain or shine. But when we got out of the car, we noticed the air around us felt heavy and humid. We knew it had just stormed but this felt weird. The air almost made us feel like we were moving in slow motion. Like time was physically moving slowly in this town.

It felt like the whole town was under water. Like we were swimming and we were held down in the water by large lead boots. We knew we must have been close to the woods because we started to smell the skunk like stench. It got stronger as we drew closer to the edge and so did the intensity of the atmosphere of this town. It was like we were being crushed by gravity. Soon we found ourselves crawling to the edge of the town.

And as soon as we passed the sign, we could not smell the smell, and we were also able to stand again -- like we had come to the surface of a vast ocean. We were coughing, and gasping, but mostly, we were glad to be out. 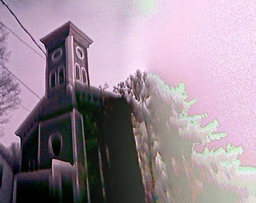 My friend's picture of the sky. 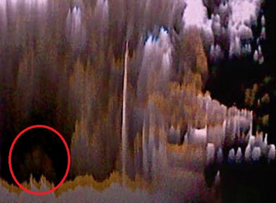 One of the figures I found 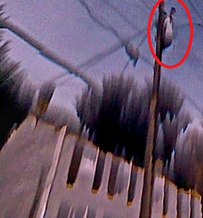 Another figure we found when we going through them. This was when he was taking another sky picture. 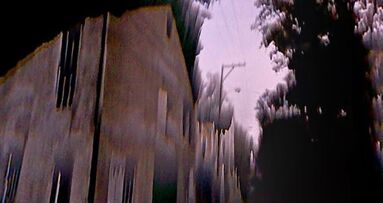 A photo of the house that we had left our car at.
Add a photo to this gallery
I remember looking back at the town as we walked through the singed forest and seeing nothing -- nothing but just more forest and then I realized what had just happened.

We had gone nowhere.

Start a Discussion Discussions about A Town Called "Knowhere"