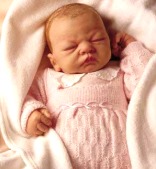 In rural Southern Illinois, a toy company began selling "realistic" baby dolls to expectant mothers. But apparently after the mother had her child, the toy baby would start crying. Eventually the "rocking motion" advertised to calm it down wouldn't work, and you couldn't get it to stop without shaking it.

Eventually, when it started crying, the parent would have to beat it, and even then the beatings and thrashings would have to get harder and harder to get it to be quiet.

The only thing that seemed to shut the baby doll up permanently was to bash its head against the wall to destroy whatever mechanism triggered the crying.

On more than one occasion though, neighbors called the authorities to report child abuse, and when the police arrived they found the bloody remains of infants smeared across the walls and the floor. In most cases the mother couldn't understand why the police were there, she said that she had just "got rid of the stupid doll," she calmly stated as she rocked a baby-shaped bundle in her arms.