Hello. This thing happened to me a few months ago; I just need to share it with somebody.

It all started at my friend’s party. He’s an artist who rented out a loft in the industrial part of town. If you can picture what a place like Detroit looked like in the 1920s – that’s what this area looks like. A bunch of old turn-of-the-century factories crammed into ten blocks.

Most of them are abandoned.

So I partied a little too hard that night and decided to crash on a couch at the loft. I woke up at around 4 am, the sun wasn’t out yet but you could still make things out in the dim blue light. I went to the bathroom, carefully tiptoeing around the people that were passed out on the floor. As I was taking a piss I tiptoed to look out the bathroom window and I saw the panorama of deserted urban decay.

I remembered how much I liked places like this. It was so dark and devoid of life, and strangely serene.

So I went back to the couch and tried to fall asleep. After 45 minutes of staring at the ceiling I decided I didn’t want to be there any longer, so I swallowed my pride and decided to wake my girlfriend up to beg her for a ride, since walking around the vacant streets at this time was not an option. Being an awesome girlfriend, she was totally cool with it, and told me she would be there in about a half-hour and that she would give me a call when she was outside. My phone died ten minutes later so I decide I would sit by the window and watch for her car. I sat there for a while and my eyes started getting heavy and I began to doze off.

A crashing noise outside woke me up. It wasn’t loud, but just enough to snap me into reality. I looked out the window and scanned the area, but didn’t see anything. Across the street from the loft near a mountain of garbage bags and one of those enormous dumpsters I see a computer and a monitor smashed against the floor that hadn’t been there before.

When my girlfriend arrived I went downstairs and greeted her. Just as I was about to get in the car, I remembered a friend of mine who had blown out his power supply. So I decided to walk over to the dumpster and see what I could salvage. The monitor was worthless, but the tower seemed to have suffered almost no damage, so I put it in the trunk and we drove off.

About a week had passed and I had completely forgotten about the tower until my girlfriend called to let me know that it was still in the trunk and that she wanted it out. That night I brought it home. Before I took it apart I decided to hook it up to my monitor to see if it still ran, and to my surprise it did. It ran Windows XP and it looked like it had been wiped clean. I decided to do searches for words like “tits” and “pussy” in hopes of finding some secret stash full of weird deviant porn the previous owner had forgotten about. Morbid curiosity, I guess. Search came up nothing. Searched for picture Files – nothing. Then I searched for movies and one file came up. It was an .avi inside a folder titled “barbie” hidden in the WINDOWS/system32 directory.

So I played it, now this is where it gets disturbing.

The movie was about an hour long, and was made up of what seemed like raw exported footage. The footage was of this woman sitting on a chair and talking against a white backdrop. I skipped through most of movie and it was all the same continuous shot. Then I decided to sit though the footage to find out what she was talking about. Fifteen seconds into the footage the audio goes completely bad and her voice is drowned in harsh static/background noise. I couldn’t make out a thing.

So I imported the footage into final cut and tried to mess with the levels to isolate her voice. It helped a little, but I still couldn’t hear what she was saying. I was intrigued now, and I began to really pay attention to her face and body language. It seems that she's being asked some kind of questions, because she stops at times to listen, and then continues talking.

About 15 minutes into the footage, her face begins to redden and contort as if the questions are bothering her... But she continues to answer them anyway. Shortly after she begins to cry. She sobs hysterically for the duration of the film. One of the few words I could lip-read was “skin”. She repeats this word many times throughout the footage and at one point she even pulls at the skin from her arm and mouths the word. She seems to be unhappy with her skin.

There is much more I have to get off my chest, but it is getting late and I can't go on. I will share the rest tomorrow. God save my soul.

It kept on building and building, and about 40 minutes in she's crying so hard she can barely look at the camera. She stops talking at this point and the rest of the footage is just her crying with her head down. Oddly enough she doesn’t get up or move, the screen just fades to black.

I was fucking dumbfounded.

I played the whole thing through many times that night, trying to find inflections and nuances in her movement that would reveal anything else about what was going on. I felt so dissatisfied, I wanted to know more. That’s when I noticed that there was about 10 more minutes left on the timeline after the screen went black, and about 2 minutes in there was more footage.

The footage was extremely shaky, almost unwatchable, and depicted a pair of legs walking along train tracks. my guess is that camera was accidentally left on as it was being carried somewhere. The person in this footage walks along the train tracks for about 6 minutes and then turns into the forest and walks over what looked like foliage flattened by a piece of plywood. The person continues on this makeshift plywood road until the movie clip ends.

Now my heart started beating with excitement because there were train tracks a few miles away that looked very similar to the one in the video. I had to check this out.

I called up my friend Ezra; he's 6’4 250 pounds of mostly muscle. I convinced him to go on a little adventure with me. I’m no pushover myself, but I felt if was to go wandering in the woods looking for god knows what, extra muscle couldn’t hurt. This whole idea of investigating this video had me so excited I couldn’t sleep.

The next morning on a sunny Saturday, I took my flashlight, my camera, and my 7 inch ka-bar with a matte black finish and serrated edge and went to pick up Ezra. When I got to his house he wasn’t even awake. When I woke him he pretty much told me to fuck off. I was already packed and I had mentally prepared myself to do this so I decided to go through with it without him. I parked my car at the train station, took my stuff, and hopped onto the tracks.

After walking for about two hours, I saw a broken piece of plywood and my knees almost buckled with excitement. I searched the nearby foliage, and there it was: a little plywood trail leading into the forest.

I walked slowly along the trail, paying close attention to everything. I would stop occasionally, kneel down, and listen for anything or anyone… but it was so quiet. This was one of the most nerve-racking things I've ever done. I didn't know what to expect at the end of this trail.

The dense tree line gave way into a little island of grassy field, and then I saw it, a house being consumed by the forest. From the looks of it no one had lived there for 20, maybe 30 years. I got my camera and snapped a few pics. A few yards away from the house was a tool shed made of rusty sheet metal. I just sat there among the trees for a while, absorbing everything.

I didn’t want to go into the open field, I had this bad feeling that something would see me.

It took me a while to muster the courage to up to the house. The door was partly opened. I pushed it in with the flashlight and was relieved that the inside was actually very well-lit. I put my flashlight away, got my camera and took a few more pics. There was no furniture. The floor was riddled with bricks and wood and rubble, and some of the walls had huge holes in them. When I went in further to explore, I saw some things that I didn’t pay much mind to in that moment, but now that I think about them in hindsight, they greatly disturb me.

The first thing that seemed a little odd was that one of the doors in the first room, that I presumed led to the basement, seemed a little too new to be in this house. It was also the only door in the house that was locked. Also, when I made my way up to the second floor, I saw some chairs and a fold-up table that also seemed a little too new to be there. But what disturbed me the most for some reason, was the bathroom. The dust on the mirror had been wiped away, and in the bathtub, I saw a clear plastic tarp that still had water droplets on it from, when I presume, it was washed clean. That’s when I heard something moan really loud, and that’s when I jumped the fuck out of the second story window and ran back to the tracks.

Halfway there I realized the moaning was most likely a water pipe expanding or contracting, and that little moment of relief gave into the horror which I felt when I wondered why the water would be running on an abandoned house in the middle of the fucking woods.

It's been a little more than 2 months since this happened and I haven’t gone back there, nor do I plan to. 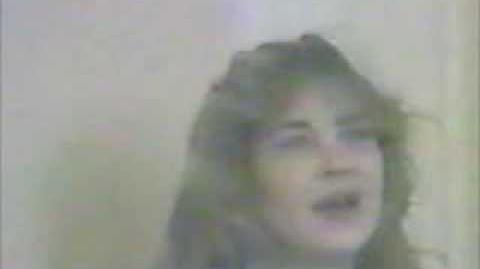 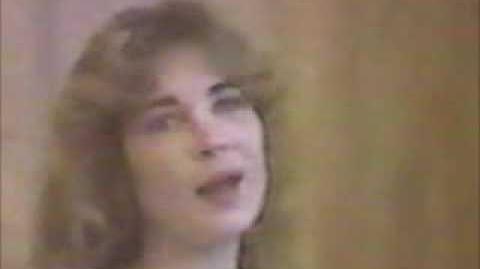 Barbie.avi (part 4)
Part #4
Add a photo to this gallery

* Please note that the original video consists of six parts, but no more than three parts were ever uploaded (1, 2 and 4).

Retrieved from "https://creepypasta.fandom.com/wiki/Barbie.avi?oldid=894863"
Community content is available under CC-BY-SA unless otherwise noted.