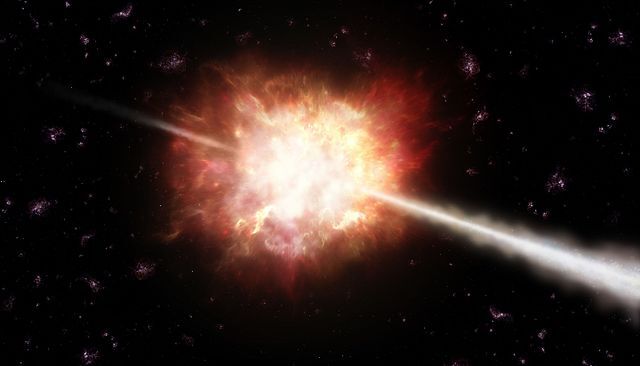 My name is Steven Byzewski. I used to work at the Brookhaven National Laboratory in Upton, New York. I managed data acquisition for SNEWS or the SuperNova Early Warning System. Not that it matters now.

I’m not a physicist. But I understood what it meant. Seven neutrino detection systems around the world fed data into the network. That way astronomers could prepare themselves before these rare events start.

I am an incurable night owl. Nobody at work would schedule a meeting with me before 11:00 AM, but once I started I stayed until the job was done. It was 7:30 PM on the 31st of October. To me, this was just another ordinary Tuesday evening, but to millions of candy-hungry kids, it was Halloween. I never liked crowds or parties. Writing a proposal for expansion of the data storage rack sounded like more fun than the campus Halloween keg party.

As I took a swig from my two-liter bottle of Diet Mountain Dew, an instant messenger window popped open with a group chat. Someone from every measuring site was in the chat. Neutrino research isn’t a huge group around the world. All the research teams know who I am and that I work late, but this was the first time they brought me into a worldwide emergency chat like this.

Chihiro Ogino at Super-K, the Super-Kamiokande detector under Mount Ikeno in Japan, messaged “Steve, Please confirm that this neutrino alert isn’t a false alarm. Has anything changed in the network? Our readings don’t make sense.”

I wrote back. “Chihiro, The last maintenance was four days ago. Nobody has reported any faults. All connectivity is solid. What is wrong?”

I knew an alert meant that more than one station detected a neutrino within ten seconds. That was an incredibly unlikely event. The IceCube observatory at the South Pole rang with excitement when they found 28 extra-solar neutrinos in two years. I pulled up the data feeds. Every site was jumping. I looked again. It was impossible unless a very close star was going nova.

Doug at HALO in Canada messaged “Could it be a Halloween prank?”

“I don’t know how. Observations arrive encrypted over the VPN. Dr. Hahn would fire any BNL worker and then call the FBI to prosecute.”

I surfed cnn.com. They had a video of sky watchers in Red Square in Moscow, Halloween trick-or-treaters in Iowa who enjoyed the bright night and parties on Rio’s beaches. I became nervous. Could I be the only person on Earth who took SecureTeam10's videos on YouTube seriously?

The chat messages flew back and forth. One from Piero at the Large Volume Detector in Italy caught my eye. The first line read “Betelgeuse! Betelgeuse! Betelgeuse!” No, not the Michael Keaton movie. Betelgeuse is a red giant star in the constellation of Orion the Arabs named after a giant's armpit. Everyone in the field agreed that Betelgeuse looked ready to go supernova.

“Comrades, I have been on the phone with the Arcetri Observatory and the VLT telescope in Chile. Both facilities confirmed that Betelgeuse has become asymmetric. They observed the formation of a dense gas shell. Its core could collapse at any moment. Unfortunately, they find no sign of Doppler shift from the gas emissions or the shell. Everything indicates the axis of the Betelgeuse is pointing right for us. It is time for everyone to start praying.”

That wasn’t a panic-gram from the ignorant. It was a prophecy by an expert. Earth lay in the firing line of one of the most powerful and dangerous phenomena in the universe, the gamma-ray burst of a supernova.

I thought of warning somebody, but who? Nobody would listen. I grabbed my cigarettes and took the stairs to the basement. I crawled under a large air conditioning condenser. It was cramped and filthy, but with tons of metal and cooling water around me, I figured I’d have the best chance.

As I huddled under the ductwork, I checked my watch and did a few mental calculations. If the burst didn’t just strip off the Earth’s entire atmosphere, everything between California and India would be irradiated. Half of humanity would die. I tried not to open the pack. I told myself that I wasn't smoking. My hands lit up a cigarette anyway.

Between pulls, I wondered if I was an idiot. My therapist said I always rationalized an excuse to avoid social events. Was I self-justifying again? It felt like being inside one of those Made in Bulgaria horror movies from SyFy channel. I had faith in Piero. If he thought there was a threat, I believed him.

After a couple of cigarettes, a flashlight shined in my eyes. “You're puffing Marlboros into my air handlers,” Bob from maintenance said. I peered up at him. He had dressed as a pink angel with taffeta wings. “You hiding under there so nobody knows you’re smoking again?”

“Stinks so much I smelled your butts from down the hall. Smoke outside. The party by the Synchrotron is rocking. Everyone’s drinking cold brews and enjoying the lights. It’s the show of the century.” He pointed at the window before walking to it. “Will you look at that? The whole sky is glowing now.”

I craned my head around and saw one giant cloud of light with streams of yellows, purples, reds, crimson and blues. "Get away from there," I shouted. "That's a gamma-ray burst."

“Everything turned into a disco!”

“Northern lights can’t kill you. Besides, it can't be gamma rays. It’s not green.”

I gave up in frustration. The one person I tried to save wouldn't listen. Unfortunately, Bob learned about gamma radiation from Dr. Bruce Banner and the Incredible Hulk. Right after he left, the power failed. I wasn't surprised PSEG Long Island went out. Even a small solar flare overloaded the transformers in Quebec in the 1980s. However, the computing center had a massive diesel backup generator. It should have kicked in when the mains cut out. We tested that monster two weeks ago. I was alone in the dim emergency light. I smoked half the pack before the show outside stopped.

My watch still worked when I got up in the morning. The little computer inside hadn't fried. This was a very good sign. Maybe my DNA wasn’t fried either.

Did Earth have an ozone layer? I looked through the loading dock window and saw a harsh, alien light, brighter than Death Valley in Summer and even uglier.

The electricity was still out. There was nobody else in the building. Everything was cold and far too quiet.

I found Bob’s welding outfit and scrounged for rain gear. I covered every inch before I stepped out. Death was everywhere. The trees looked burnt. Dead birds, dead insects, and dead people covered the dead grass. The gamma rays overloaded their nervous systems and stopped their hearts.

The dying people were even worse. We must be in the middle of a giant ozone hole. I watched their skin burn away. A few begged for help. Several had been my colleagues. I screamed and stumbled away. They had already died. They just didn’t know it.

As I retreated to the computing center, I glanced back at the carnage. I have no idea what to do next.

Written by DrBobSmith
Content is available under CC BY-SA

Retrieved from "https://creepypasta.fandom.com/wiki/Beetlejuice?oldid=1363169"
Community content is available under CC-BY-SA unless otherwise noted.