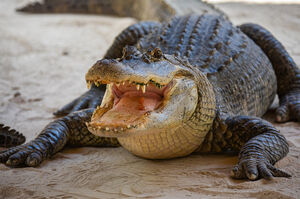 Beware the legend of Two-Toed Tom. Many people in my neck of the woods knew the story and feared the threat he entailed. Old Two-Toed Tom was a wicked devil who was cast down with Satan, deep into the darkest pits of Hell's bowels. He came to our town not too long afterward, his eyes burning a glowing red from the fire and brimstone. Do let me tell you the tale, one that was passed down from my family down to me.

He arrived when a massive earthquake shook our town, the last major shuffling occurring in 1931. Two-Toed Tom took roost in our town's swamp saying with a loud voice, "I have made this town my dominion and the people my footstool!"

Overnight, tons of the town's livestock disappeared. Trails of blood were left, to which townspeople followed to the swamp. Two-Toed Tom would glut himself on the flesh and blood of the livestock he killed, sometimes even keeping them alive long enough to make people watch with disbelief as he bit away at the animal's flesh and ripped out their innards.

He was a large sonofabitch, 4.5 meters in length. His jaws were massive and lined with thousands of razor-sharp teeth as big as butcher knives. His hide was thick, preventing man's weapons from penetrating it. That one time, though, a crafty hunter went to Two-Toed Tom in the darkest of night and placed two sticks of dynamite underneath his colossal claws. By the time Old Two-Toed Tom stirred awake, his hand was torn up in a mighty explosion. His fingers were blown sky-high; I even think two of them were blasted up to space and may as well be on the Moon as we speak. In his pain, he set his sight on the hunter and swore that he would make him pay dearly.

If that was the end of the story, I'd have very much say that Two-Toed Tom died from the blood loss, but my friend, this wasn't the end of it. The alligator always shook off attacks with ease. No one had managed to harm him in his long, long existence. He always prided himself in the fear he represented, but now he was knocked down a few pegs. He was now in the same field as mere mortals. That enraged him.

It all came to a head one day when the hunter's youngest boy, Timothy Meier, went missing. He was being taken care of by his older sister, but she had dozed off during the day. Little Timothy traversed to the edge of a pond's bank to catch the tadpoles that were born after the melting of that past winter's frost. The hunter came in asking his oldest daughter where his son was. That was when a scream rang out sending the two dashing towards the pond. The pond was stained in crimson red. On the surface of the water, the hunter and his daughter gasped in shock for little Timothy's body was bitten in half his upper body floating on the surface with an expression of absolute terror.

Spikes breached the surface of the water alongside two red eyes. Two-Toed Tom reared up in the water, the lower half of Timothy's body being firmly gripped in his jaws. Blood gushed down Two-Toed Tom's cheeks as he bared his sinister grin.

"I told you that I would make you pay."

The hunter, in anger, grabbed rocks aligning the bank of the pond and chunked the rocks at the accursed alligator in a blind fury. But the lizard had already escaped. Word circulated through the town that Two-Toed Tom took a human life like wildfire. Unlike alligators who would rather leave you be, Two-Toed Tom developed a taste for human blood but killed out of the sheer joy behind it rather than for necessity.

Women were known to venture to the swamps for most reasons. One was named Daisy O'Connell who was the town gossip. She had a pretty face that Old Tom decided she looked better off without. He bit her head off in one go and chewed it to paste between his massive teeth. Her fellow gossip clique discovered her decaying body at the entrance of the swamp. She was splayed out like how some hunters would mount their kills to show off their hunting skills.

The group of five women who made up the clique met with grisly fates not too long afterward. One woman's body was found in her bathtub, completely stripped of her skin, reduced to a chunk of meat.

Trails of two-toed footprints served as Two-Toed Tom's calling card, and sometimes he would deliberately set up trails to let people know that he was around.

The hunter became overcome with the paranoia of the raging mass hysteria the lizard wrought. Parents were having their children follow strict curfews to keep them from going towards any bodies of water. Even the bathwater was considered unsafe as witnesses have claimed to have seen him waddling in the water, staring his victim down anticipating that they'd enter the water. The hunter became obsessed with killing the beast regardless of the costs. He boarded his remaining children in the house, going as far to remove them from school. Water became scarce in the house due to the hunter, in his paranoia, deciding to cut the water off to keep Two-Toed Tom from entering through the pipes. It fell in his responsibility to provide the family with fresh water that he got by boiling it.

It remained like this until one day when he was far from home on important business duty, his elder daughter was babysitting her siblings. She began to have one of her sleeping spells and as she was drifting off to sleep, a knock at the door shook her awake. She went to the door, suspiciousness crossing her mind.

"Let me in, let me in," a deep, gravelly voice bellowed out.

There was a knocking on the door, now harder. A low growl resonated from the person on the other side of the door. One of agitation. Whoever was on the other side lightly tapped the door with their fingers. But even the soft tapping sounded off. The person's fingernails sounded long and hollow.

"My Dad said that he'd be gone until 5 o'clock," the daughter proclaimed.

The tapping stopped. A dreaded silence filled the air. The visitor growled lowly before talking again. "I work for your daddy."

"You do?" the daughter said her eyebrows raised.

"He was working one of the cotton gins, and his arm got ripped off." The visitor breathed slowly. "He's in grave harm."

The daughter became bewildered. Despite her father's warnings, she loosened the bolts on the door and opened it. She shrieked when her eyes met the sulfuric flames of Two-Toed Tom's eyes. The house was filled with waves of screaming and struggling. The daughter fought back against the beast with all her might, while additionally trying to shield her siblings to no avail. By the time the hunter returned home, blood filled the floors along with the mangled bodies of the hunter's children. On the wall was a message carved into it.

"I told you I would make you pay."

With nothing left to lose, the hunter grabbed his ammo and all the dynamite he could get his fingers on. He traveled to the swamp which was now decorated with dozens of the dreaded lizard's trophies. What happened next was anyone's guess. There was a rapid succession of explosions with gunpowder filling the air and flowing to the old town. The hunter and Two-Toed Tom were never seen again. No bodies were ever found. Rumor has it that they may as well have been blown to kingdom come. The hunter may as well could be continuing his fight with Two-Toed Tom on his home terrain. Whatever the case, the string of murders ceased for a few years until just recently.

The oddest thing about this though is that at midnight, I often hear a light tapping in my pipes accompanied by a low chuckle. I sometimes even see red eyes following me throughout my house.

Retrieved from "https://creepypasta.fandom.com/wiki/Beware_Two-Toed_Tom?oldid=1423419"
Community content is available under CC-BY-SA unless otherwise noted.