Like a lot of you, I called that number for Boothworld Industries.

Before I called, I read through the responses in the thread. I like knowing what's going to happen before it happens. I guess I'm boring like that.

It was still a sick thrill to dial in the number and hit call even though I knew what was coming. I was on the home phone and made sure to block my info. Just in case.

Something went wrong, though.

You all got a voicemail, I got a live person.

I froze at this point. I didn't know what to say. I expected a canned message like the rest of you got, maybe even the weird text. I never expected a real person to pick up. I panicked and hung up the phone.

When it started ringing five seconds later, I left the house to go pick up my daughter Ariana from school. On the way back, my cell started ringing. Ariana loves the hands-free phone in our car. She likes to pick it up and pretend like it's the intercom of a spaceship and that the caller is a Cylon. I blame my husband's frequent viewing of Battlestar Galactica for this.

"Mommy?" Ariana asked, "Can I push the button?"

"Sure," I said. "Make it fast before the light changes, though."

Ariana unbuckled her seat belt and reached up between the two front seats to hit the button that would pick up the phone.

"Hello?" she said, after she waited for the beep that let you know the phone picked up.

I heard the same voice from earlier. Flat. Almost robotic.

Everything stopped for me then. The light turned green. Cars drove by. The cars behind me honked.

But I sat there, staring at my steering wheel.

/r/nosleep is supposed to be a place for scary stories. A place where you can scare yourself a little, but be fine at the end. A place you live out your fears.

There was nothing safe about that woman's voice on the other end of the phone.

"Mommy?" Ariana asked. "Is everything okay?"

"Hello, Ariana," the operator said, "welcome to Boothworld Industries. My name is Samantha and I will be your operator today. Name?"

"Mrs. Jacobs," the woman said. "Please call the office when you get home. We have some remodeling to schedule."

I didn't answer. I hung up the phone and drove the rest of the way home.

Ariana looked up at me as we walked up the driveway. "Was that a Cylon?"

I smiled, even though if felt like someone had skewered my stomach to the concrete and it was still writhing around there.

My little girl looked up at me. Her brow wrinkled and she frowned.

That broke my heart.

It was the first time I'd lied to her.

No, it wasn't a Cylon on the other end of the line, but there was something lacking in the Boothworld operator's voice.

When we got inside, I made Ariana a bowl of cereal and took it to her room. I turned on SpongeBob SquarePants for her to watch, and I knew what I had to do.

When I brought the phone up to my ear, someone was breathing on the other end. I never even heard it ring.

My mouth went dry. I knew what I was supposed to do.

Janice was my boss at work. Although her voice reminded me of Fran Drescher's, her constant exploring hands reminded me more of that sleazy boss from Disclosure.

On the other end of the phone, I could hear Samantha pounding on the keyboard. It sounded like she was wearing one of those cordless headsets and slamming her face down on the keys.

"Janice Hoffman," she said. "Remodeling is scheduled for January 14, 2022. Would you like to reschedule?"

"We have an opening on Monday."

I wanted nothing to do with listening to someone die. "No," I said.

"Alright. On Monday, the 13th, we have Janice Hoffman scheduled for remodeling."

What the hell was she talking about? The original story never mentioned anything about payment.

"Yes, Mrs. Jacobs. When you schedule a remodeling, the scheduling is final unless another member shifts the scheduled date. We expect payment in full before service is rendered."

The name hung in the air.

"The price for the scheduled remodeling is your daughter, Ariana. If you do not pay, we will have no choice but to repossess what is due."

My blood ran cold when she said repossess. I could hear her smiling on the other end of the phone. The first fragment of emotion she'd shown yet.

"What's the difference between a payment and a repossession?" I asked, closing my eyes.

"You can earn any payment back - parts of it at least - by referring new members. Unfortunately, all repossessions are final."

"Why are you doing this?"

"Ma'am, you responded to our ad on /r/nosleep and called us. You contracted work on Janice Hoffman. Now we are at the payment stage. The cost of the work is your daughter Ariana."

"Wonderful. Repossession is scheduled then. We at Boothworld Industries say thanks and welcome to the club. You have a marvelous day."

I jumped when the phone clicked.

I took it away from my head and stared at it.

If I hadn't felt like I was going to cry and throw up at the same time, I would've laughed. Everything was crazy. I was crazy. I stared at my cell's display.

The Boothworld Industries number was still sitting there on the screen.

I ran to Ariana's room. It was empty.

The bowl of cereal sat on the towel I always put under anything Ariana ate in case of spills.

Sitting in the bowl was a business card.

I took a picture because I thought I was going crazy and I thought that the card wouldn't be there if I blinked. When I picked the card up, it was warm, baking with wet heat. My skin crawled, and I threw it down. It landed backside up in the bowl.

I heard a roar outside and made it out just in time to see a matte black Chevelle SS roll around the corner.

I called the police. They sent out an officer and he took down all my info. An Amber Alert was issued; the waiting began.

I felt desperate, so I visited /r/boothworld, but the sub-reddt was private.

I got a call a few hours later.

"Hello?" I asked. I already knew who would be on the other end.

"Ma'am, this is Samantha with Boothworld Industries again. Your courtesy call begins now."

I hung up. My cell started ringing again. 323 area code.

I took the battery out of my cell. My house phone started ringing. Caller ID read an 832 area code.

I didn't answer; I pulled the jack from the wall and sat down with my face in my hands. I couldn't bring myself to think about what was happening. I sat there and cried, feeling completely helpless.

That's when the phone started ringing.

My cell buzzed across the table, away from its battery, and my unplugged home phone rang louder than it ever had before.

I got in my car and left. I went to Wal-Mart and used a payphone to call the detective in charge of Ariana's case. His name was Stark.

After waiting for a long time on hold, Stark picked up.

"Have you found her?" I asked.

"No, but we traced the number. It was a cell phone from some kid a block over from where you live. He said that he never made the call, but the carrier says otherwise. The kid says that he called a number for - just a second - here it is: Boothworld Industries. On a site called Readit."

"That's what I said. There's no record of Boothworld Industries anywhere. We're holding the kid and I'll let you know if anything happens, okay?"

"Is that all?" I asked. I just want my daughter back.

"Good," Stark said. "We at the police department say thanks and you're welcome to call if you need to, but I'm sure that we'll be in touch soon. You have a marvelous day."

I hung up the phone, and it started ringing immediately. I picked it up, stupidly hoping it was Stark with new info. It wasn't.

A male's voice growled into my ear.

"The scheduled work has been completed. We at Boothworld Industries say thanks and welcome to the club. /r/boothworld is now open. You have a marvelous day."

The line dropped and I hung up the phone. I brought my hand up to my ear; it was warm with his breath.

EDIT: I made a mistake. Everything is fine. We at the Jacobs household say thanks. You have a marvelous day. 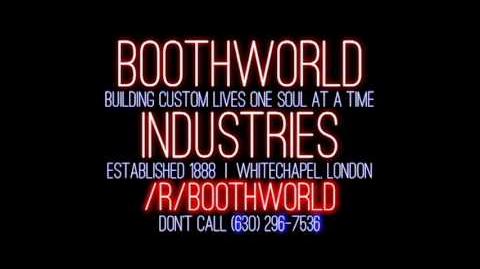 Retrieved from "https://creepypasta.fandom.com/wiki/Boothworld_Industries?oldid=1439831"
Community content is available under CC-BY-SA unless otherwise noted.