Clouds blotted out the sun as Dixon Rhodes' car traveled down the highway toward Boulder City Penitentiary. Lightning streaked through the sky as Dixon waited for a new guard to open the gate to the prison; the guard hit a button which caused the gate to slide open as desired and tipped his hat courteously. Dixon parked his car in the lot, perfectly in between both lines. He looked in his rear-view mirror to make sure that he looked professional. He straightened his tie and adjusted his glasses until he was assured that his appearance was immaculate.

As he opened his driver's door, rain began to pour from the sky. Dixon reached over to the passenger seat and grabbed his umbrella. He began to curse himself internally for leaving his car door open and turning his back to it—what if a prisoner had escaped? That never happens, his mind reassured him. He locked and shut the driver's door as he opened up his umbrella. Dixon walked up to the second gate into the penitentiary and again waited as the guard opened the gate.

Dixon was caught in his thoughts, thinking about the rumor that the prison was haunted when the guard spoke.

"The gate is open, Warden Rhodes," he flatly stated.

Rhodes bowed his head in thanks as he continued toward the prison. Lightning forked through the sky as Rhodes neared the building, blood spatter on the wall next to the door was illuminated briefly thanks to the flash. He turned his head toward the guard that was to let him into the prison.

"An incident, sir. Everything is fine now."

The guard nodded his head in affirmation.

"I can't believe they got this far out," Dixon muttered.

The guard opened the prison door with the keys and locked it behind the warden as he entered. The room was poorly lit. This is a security issue and is unacceptable, he thought. The darkness made Rhodes uncomfortable as his mind shifted back to all of the strange incidents.

He thought of how things had a habit of going missing from his office, the strange noises that went on during the night and the reports of figures being spotted in the prison yard at night, which always disappeared by the time the guards would arrive. Rhodes had an explanation for each, multiple even, but that did little to quell his fear of a ghost grabbing him and pulling him into the darkness.

A guard stepped beside Rhodes so as to escort him to his office. He couldn't tell if it was Frank or not, due to the poor visibility. Frank Slater was the name of the guard who usually provided escort.

Rhodes turned to the guard, "Frank?"

"What," the man said in between coughs.

"One of the prisoners popped me good during the riot. I'll manage."

Strange sounds came from the distance. The sounds became more distinguishable as he got nearer to Cell Block D: wails of pain came from the other side of the door. Ghosts? Preposterous. Surely the riot wasn't still in progress —the guards couldn't have been so irresponsible as to let him in during a riot. Frank opened the door and shut it behind the warden. Rhodes turned around and tried the door —it had been locked. Frank was supposed to have escorted him to his office; he was now going to need to have a serious conversation with Frank about his behavior and future at the prison.

Rhodes turned around and was relieved to see that Cell Block D's lighting was up to standard. He looked up and saw that the cells were shut and locked, that counted for something at least.

Two new guards came up to Rhodes and began to escort him to his office. A banging came from his right, and he quickly realized that it was a prisoner banging on his cell. Rhodes turned his head to yell at the prisoner, but when he glanced over at the cell to his right, he saw that Frank was locked in it. 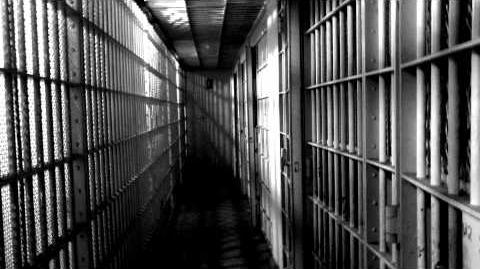 Written by Doom Vroom
Content is available under CC BY-SA