The Buried Alive Model — often referred to as its code, the Buryman script — was to be found on the final story of the Pokémon Tower, in what has now been replaced with the Marowak ghost. According to the scripts assigned to it, the Buried Alive model was intended to be the "boss" of the tower. Once reaching the top floor, the following conversation would have taken place.

After this, the battle would have been initiated. Once in "battle view", the Buried Alive model appears to be a decaying human corpse attempting to crawl out of the ground. It has been programmed to have two White Hands, a Gengar, and a Muk.

Strangely enough, a protocol for the Buried Alive's actions after it was defeated were not written.

In the case of the player defeating him, the game would freeze. However, a specific ending was written by an unknown programmer upon losing the battle. In this ending, the Buried Alive was to have stated, "Finally, fresh meat!" followed by several lines of gibberish.

He was to have then dragged the player character into the ground surrounding him. The scene would finish with a typical "Game Over" screen; however, in the background, an image of the Buried Alive character devouring the player was to have been shown.

Especially strange are the protocols for after this scene. The cartridge was to download this image to the small internal memory contained in the Game Boy, overwriting the title screen that normally accompanied a Game Boy turning on. Instead, whenever it was started, the player would view this image as the sound file staticmesh.wav was played.

The intended purpose for this effect, unlike many of the other factors leading towards Lavender Town Syndrome, is unknown. 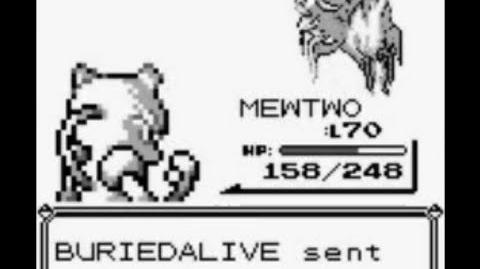