IMPORTANT: Warnings and ban notices for violating Discussions rules are issued on users' talk pages. You are responsible for checking your wiki notifications for talk page warnings.

If your thread or poll is removed, DO NOT repost it. Doing so will subject you to a ban.

1. First and foremost, all general rules of this wiki extend to Discussions. This includes the minimum age requirement and the rule against multiple accounts as well as the rule against blogicles. You must read all the wiki rules before posting here.

2. Do not solicit personal information from other users. This includes asking for photographs that include someone's face.

Do not reveal highly personal information, such as where you live beyond your general city area, or where you go to school. Do not share highly personal social media handles such as Facebook or Snapchat, especially if you are a minor (anonymous handles such as Deviantart are allowed under caution.) We reserve the right to remove posts that we determine could lead to stalking or doxxing.

3. Do not post full-text stories in Discussions, including OC stories and fan fiction. These are considered blogicles and will be subject to the same warnings and bans as posting a blogicle anywhere else on the wiki.

If you want to post a story to this wiki, upload it as an article instead. Use the Create Page button on the top right toolbar.

4. Do not use Discussions as a chat or direct message feature. If you want to hit someone up just to talk, use their talk page.

5. No roleplaying. Roleplay includes but is not limited to pretending fictional creepypastas are real, pretending to be in a creepypasta, ARGs, or claiming to have summoned a creepypasta entity, as well as dedicated roleplaying threads, roleplay games such as "ban the user above you," etc.

This rule also covers posts asking if certain obviously fake stories are real. Even if you are genuinely asking, answering in the affirmative would cause another user to transgress the roleplay rule, thus such posts will be deleted for inviting roleplay.

6. Art and fanart is allowed, but must be in good taste. Posts containing gore, nudity, etc. will be deleted, as will any posts that violate the Fandom terms and conditions. Any kind of ecchi or sexual art is also forbidden even if it is technically safe-for-work and there is no explicit nudity.

All artwork must be under the "Art" board category. If it is not, the post will be locked. 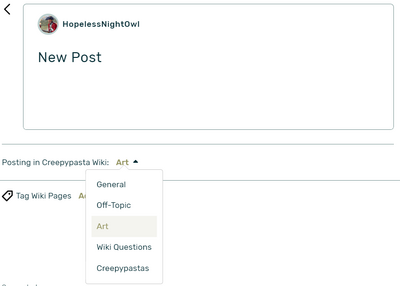 Anything involving suicide or self-harm is absolutely prohibited, period. It will not be allowed even if you put a "trigger warning" on it.

7. Art must be the work of the poster and not taken from another website, blog, or source.

Claiming someone else's artwork as your own will subject you to a ban for art plagiarism.

8. Posts that have nothing to do with creepypasta are allowed under caution, but will be monitored more closely than on-topic posts.

With that said, DO NOT spam memes, copypastas, etc. Discussions is not a chat room or Twitter.

9. Do not incite drama. This includes making "call out" posts directed at another user.

Example: You and another user get into an argument and the thread is deleted. You're still upset so you make a new thread specifically to continue the argument. Yeah, don't do that, or anything similar. If you have an issue with a specific user, feel free to contact the admins about it.

Please also refrain from discussing divisive political topics. Discussions is not the place to talk about such matters.

10. Do not abuse the ping/mention feature. Unless you are a mod or admin, there is no reason for you to be constantly pinging people. When in doubt, don't ping unless there is a situation that needs immediate admin attention, in which case you may ping an admin.

11. Do not abuse the polling system. Use the polling feature with moderation and avoid spamming rapid low-effort polls. Meme polls, joke polls, or otherwise pointless polls will be removed.

Polls must NOT ask anything similar to the following:

Who would win in a fight?

Who is better/which character do you prefer?

Should I write a story?

What story should I write?

Should I do X?

Who do you ship?

How old are you? (asking for someone's age is against both our rules and Fandom's global ToU)