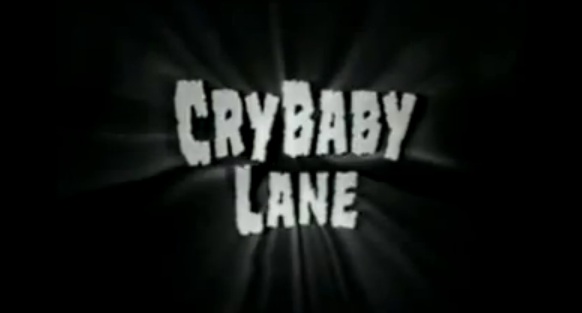 In 1999, I was twenty-two and I had just graduated from Emerson University in downtown Boston, majoring in screenwriting, specifically in cartoons and children’s programming. My debt was pretty bad, so when Nickelodeon Studios offered me an internship at the studio in California, I accepted immediately. I jumped at the chance to get away from dead end job at Benjamin Franklin tour guide.

I don’t even think Nickelodeon HAS the original cut of the movie anymore, and if they do it’s in only back-up copies; if the back-up copies exist they must be locked away in some vault along with all the deleted episodes of Ren and Stimpy and the never-before-mentioned episodes of SpongeBob SquarePants. I’m pretty sure the director, Peter Lauer, has the original copy and it’s probably on his mantle next to his snuff films, that creepy ass fuck.

Anyway, I was hired in 1999 and immediately I was put on a creative production team for the movie Cry Baby Lane. It would be almost a year before the movie was due to be broadcast; all in all, it was a pretty low effort kind of thing. There were only four people on the creative team and I was the only steady one; Lauer would replace them on a whim. He said it was to keep it fresh. I thought it was because he was hiding something... and I was right.

We had a little over a year to make a made for TV movie - not just to write it and cast it but to film it and get it edited. Lauer didn’t work fast at all; after the first three weeks we only had the ideas for the first 15 minutes of an 85 minute movie. Lauer, even at this point, was a weirdo. He was tall and lanky, and he carried himself awkwardly - he stuttered when he talked and sometimes, when you were hunched over a piece of paper during those endless ‘brainstorming sessions,’ you’d look up and you'd catch him staring at you, smiling.

He’d look away when you caught his eye, and I guess that was the creepiest part; he always looked like he had something to hide. The brainstorm sessions, at first, were alright. We got the premise of it down pat: two brothers unleash a demon and they get into mischief trying to get everything back to normal. Not exactly daytime Emmy stuff, but you know, it was an alright start. I thought the movie should be goofy and spooky, kind of like a Courage the Cowardly dog sort of deal. However, from the very beginning, Lauer made it clear that he wanted the film to be as scary as possible. He didn’t want it to be cheap thrills, with a good wholesome ending. He wanted to push it farther than Are You Afraid of The Dark ever dreamed of... and I guess he did.

It was about 3 weeks into production when I first noticed something: Lauer had the absolute power of persuasion over everyone else in the creative production team. No one fought him and by the third week, he was already suggesting some morbid things. I remember he said he wanted the little brother to die halfway through the movie, getting hit with a dump truck. I immediately shot it down. I was the only one who said anything, and it stayed that way until I left the studio entirely and never came back.

At first, cannibalism and other fucked up shit was kept to jokes and tasteless comments but as time went on, it became more and more overt. I’d give him an idea (which most of the time he would end up using) like “How about the movie starts with a morbid undertaker who reads them stories,” to which he’d reply, “Yeah... and then he can cut them up into little pieces and force-feed them to his dog!” He made those jokes a few times in the early stages. Then he got serious.

He’d stand up like he was Jesus or something, clear his throat loudly, and proclaim his idea. I’d be the only one to shoot it down. Every-fucking-time.

One day near the end of our brainstorming sessions, Lauer cleared his voice and stood up. We all fell silent, and looked at him, like we normally would. He stood up, and said,

“Gentlemen and females, I have an idea.”

I remember what he did—he paused, and looked right at me as he said,

“The story will revolve around the legend of a pair of Siamese twins. Have you ever heard of the Donner Party?”

Everyone nodded, except for me. I didn’t like where the conversation was going.

“They ate themselves when it got cold. They ate each other.”

Everyone nodded again. I closed my eyes.

“What would Siamese twins do if they had nothing to eat? Would one wait until the other twin dies, then consume her own sister’s flesh? Would they claw out each other's eyes until one of them died, then dine upon them like a vulture tearing at the skin of a dead deer? I do not know. It is interesting indeed.”

I didn’t know what the fuck I was hearing. I opened my eyes and looked around the room; no one was fucking moving. Everyone’s eyes were on Lauer except for mine, and when I looked at him, he was still staring at me.

“Children like violence, they revel in it. Children like to be scared. So we’ll scare them, won't we, Jonny?” He leaned over the table, getting pretty damn close to my face. His breath smelt like decaying shit. I stared back at him.

“I think you're fucked up, to be honest.”

He smiled, then backed away.

“Oh, I’m fucked up alright, but you have to be fucked up to survive in this cut-throat world!” His grin expanded.

“Literally. Right now, I’m going to show you some pictures that will spark some of your imaginations.”

He got up, and locked the door from the inside.

I stood up, and said, “What the fuck are you doing?”

“Let’s not make any... errors in judgement, Jonathan. Sit down.”

For some reason, I did; Lauer pulled out one of those shitty overhead projectors. He turned on the switch and he speak-shouted, in an unusually high and semi-frantic voice,

“This is the fucking MUSE we NEED to CONTINUE with THIS PRO-FUCKING-DUCTION! THIS IS WHAT EVERY CHILD SHOULD SEE.”

His eyes bulged in his head.

He put the image down on the glass surface of the overhead.

The image was in black and white, but it was grainy. I could vaguely make out a boy lying on a brick floor, his arms cut off and his bloody little nub black dots. The only thing that was clear was his face. He was bleeding from the mouth.

Lauer almost threw the paper off the overhead, slamming down another one.

It was a zoomed-in shot of the boy's face. It was in color. The blood trickled from his open mouth onto the brick floor, his eyes shut, grimy blood underneath his eyebrows and eyelashes.

Then, his eyes opened, and I screamed. No one else in the fucking room did, and it died in infancy, the shrillness ringing in the air.

The pupils were completely black. The rest of the eye was normal.

The longer I stared, the more the eyes opened, widening and widening until it looked like the skin above his eyebrows and eye sockets was going to rip in half.

Then they started to bleed. Blood started as a trickle, and I swear to god I could hear it. More, now it was like a full blown stream. More. More, until the brick on the floor was a lake of blood. I could hear it, like I was hiking and I came across a stream, and now I could smell the kid. I could fucking smell his rot.

I leaned underneath the table and vomited. When I rose back up, the images were gone. Everyone else in the room was expressionless. Lauer turned on the lights.

“You may go,” he said, unlocking the door.

I walked through those fucking doors, and I never came back.

This happened near the end of the brainstorming process and by the time I left the casting was done and the script was almost fully written. They were desperately behind schedule; I think Lauer planned it that way, so there wouldn’t be time for proper editing. I never watched the real thing when it aired, but I heard from a friend who was working at the editing department that they had to cut a good 15–20 minutes of ‘disturbing’ footage from the film before it was fit to be released, and it was only fit to be released. They didn’t have enough time to check the footage frame by frame.

I guess he got his wish, unless they cut every single scene that had the pictures in them. Every child watching Cry Baby Lane has an unconscious memory of those pictures, and I weep for them, I really do; they fucked me up, and as I write this to you, it will be last thing I'll ever write before I slit my throat and before blood spatters all over this fucking computer screen.

There's something I should tell you first, though.

Early on, Lauer posed an idea of the two brothers capturing a squirrel, putting said squirrel in a jar, and slowly drowning it before filling the jar with sand and dropping it into the bottom of a pond. Soon after this was suggested, Sandy from SpongeBob SquarePants appeared in "Tea at the Treedome".

Lauer also suggested, in one scene of the movie, for a man with a "squid-like nose" to take off his pants in front of the two boys and rape them off-camera, but heavily implied. Squidward soon appeared as a major character in SpongeBob SquarePants.

It was suggested that the two be stepbrothers, forced to live in the same house after the first one's mom was found dead in a shallow grave, her body heavily cannibalized by her own husband, a local weatherman. A show with the vaguely premise, Drake and Josh, started in 2004, and the stepfather is indeed a weatherman.

Lauer also suggested the younger brother have a dog-house in which he keeps various animal fetuses encased in acid that he regularly uses to poison his mother to have sex with his abusive stepfather. As Told by Ginger debuted soon after.

A man who captures the souls of children in a vacuum cleaner and sends them to Hades? Danny Phantom.

A robot who goes insane on the two brothers, kills one of them wears his skin, pretending to be the dead brother at highschool? My Life as a Teenage Robot.

The list goes on and on. Nickelodeon knows, and they're continuing the legacy of Lauer, sometimes subtly, and sometimes overtly. And there's nothing you and I can do about it. Do you want to see it? You got it.

Retrieved from "https://creepypasta.fandom.com/wiki/Cry_Baby_Lane?oldid=1233530"
Community content is available under CC-BY-SA unless otherwise noted.