What are dreams? What are they truly? Are they nothing more than bits and pieces of thoughts and ideas thrown together without design or purpose? Might they serve a greater purpose such as whisper tales of coming days or reveal forgotten, lost recollections from days long passed? Maybe your soul is expelled from our bodies each night, thrust out into the void and travels to lands far away? Consider this, what if our dreams are more than just nonsense? What if they were premonitions and told of adventures not yet had?

Tell me, have you ever had a dream that revealed wonders so great, it made your waking life seem distant and dull? Have you ever dreamed a dream that revealed glimpses of who you are and whispered secrets of what you are meant to become? Do you know of anything that could fill you with such sorrow, to awaken each morning and desire with all your might that your eyes would open to a brand new world, yet never does it come? With every sunrise, that is the burden I bear. However, such sadness does not consume me, for you see, in my heart, I know my dreams are much more than wishful thinking and a longing desire for something more to this life. They are so much more than you could possibly imagine. For you see, my dreams are preparing me for great things to come, I know that to be the truth!

No, it does not offend me when you roll your eyes at me. You are not the first to dismiss my words or mock my resolve. Many simply laugh out of amusement and others feign looks of pity towards me. They say "Surely, only one who is mad would entertain such foolishness." They can see only a land of make-believe; a fairy tale fabricated from the mind of a boy. They cannot accept that a child, orphaned as an infant, who never knew the embrace of a mother or the guidance from a father could still possess a birthright of greatness. Nor would they consider such a waif could excel above all others with only the determination of his heart and by the strength in his hands. Despite it all, I hold no malice toward anyone; for their conclusions are not without logic, albeit sadly short-sighted. Well, soon all will be revealed! For tomorrow is my birthday and when I am gone, they will know they were wrong!

You see, tomorrow is the day my dreams have been telling me about for as long as I can remember. It is the day my dreams foretold: “Before the sun sets on your five and tenth year of life, you shall return with hope and salvation on your back and light in your hands. By your blade, you will rid the land of the Worm.”

That is what I see each and every night when I close my eyes and surrender to sleep. So, for one brief moment, let go of all your misgivings and apprehensions. Leave behind your doubt and listen to my voice. Listen and let me tell you about my dreams.

In my dreams, there’s a realm so close to our own that only the width of a hair separates the two. They exist side by side, unaware of one another, yet they are so far apart that traveling the distance would take a thousand years. It is a medieval realm where science and magic live alongside each other as beloved friends. Machines and technology, sorcery and magic, here they are one. In this world, little distinction can be seen in matters of wizarding and science. Sorcerers and teachers or magicians and healers, they are the same here. This realm is ruled by six great nations, each with a king and queen of virtuous heart and noble blood. Castles and villages, farms and towns pepper the land. All live simplistic lives with a hint of technologies both natural and mystical.

In my dreams, I see a beautiful, white, domed temple made of ivory stone. The temple is home to six revered weapons made from sacred steel; a gift from a goddess and bestowed upon a chosen warrior from each nation. She offered these weapons in preparation for the day foretold, the day of the Worm. Honored are those blades, but in the center of the temple, is the seventh altar; the spot most exalted. Upon this shrine rests the armor and weapons of the seventh son of a seventh son. A boy born under an eclipse of the three moons and conceived from the joining of a mortal and a god. His bloodline is destined to ignite the realms within shadow and despair and shine hope upon an oppressed and dying people.

In my dreams, the weapons I wield are made from mystical steel of silver and blue. My armor is impenetrable and durable, yet impossibly light. My gauntlet extends past my elbow and serves as my shield. Upon the broad cuff of the metal-plated glove is housed a diamond shaped disk with three blades that emerge from its tips with a lethal snap. When flung at my enemies, the disk obeys my will. It lays waste to all of my foes, then faithfully returns to my hand without fail every time. Forged was my sword from the last remnants of Creation. Its steel was tempered under the solar storms of a distant star and cooled with the very essence of life. It is the mortal enemy of rot and decay. Never will my sword be broken, nothing can shatter its blade. It is impervious to impact, never will its edge become worn and dulled. The jeweled eye that sits within its hilt is my symbol and banner. It is the beacon that shines a light of hope and victory against any abomination that dares to stands against me.

In my dreams, I see a day in which black rain falls from the sky. Ropey and fibrous strands of greenish-black tar pour from the clouds. Its touch brings death and decay across the land. The arrival of the Worm is heralded by a clap of thunder as his fortress bursts through the clouds. It pierces the ground like a dagger stabbed into flesh! It is a jagged and pointed, crystalline citadel with bulbous blister-like domes upon its walls. The crystalline mountain is the throne from where the Worm will conquer and reign. Black waterfalls pour from the dark fortress and crash to the ground, spreading outward from the mountain's base. It is the source of the decay, a black mold of writhing masses of tentacles and tendrils that infest the land with its disease of corrosion. Everything it comes into contact with begins to corrode and rot away, except for one thing: the dead. For what is a warlord without an army of pawns?

The dead are absorbed and transformed into vessels for the decay to use and take form. They are the loyal eyes, the foot, and the iron fist of the Worm. The once good people are now primal, and vicious creatures, robbed of the peace one would find in death. They are servants of the Worm. They attack with such rage and violence, even the mightiest of soldiers cower upon their approach. They strike with fingers as sharp as daggers, and they stab with limbs as deadly as spears.

The Worm leaves a wake of desolation and decay in its path. It fills its ranks with the deceased and slain flesh of the villages it encounters. From his fortress, the blisters upon its walls are released, and its army of decayed and mindless drones carry the smelly, rotting masses into the heart of all six nations. It will plant itself into the ground and become extensions of the mind and will of the Worm. From there it will wage war against every man, woman, and child. It will lay siege against the people with a battle cry of a death rattle, screamed from the lips and mouths of their deceased friends, families, and loved ones.

In my dreams, I see the goddess blessing the six warriors of each nation before spiriting away the seventh set of weapons. She takes them from the walls of the vulnerable temple and hides them in a place far from the Worm’s reach. There they will wait for the child foretold to come. In a final act of sacrifice, I see the goddess exhausting the last of her immortality to open a door of light. She places a tiny infant at the entrance and before closing the door she says with tears in her eyes, “Goodbye, my dearest little one. Goodbye, my beloved son.”

It is twenty minutes to midnight, the day of my fifteenth birthday. I sit on the cold wooden floor, and I am trembling next to a heated stove. But it is not the cold I tremble from; it is a deep fear that fills my heart. The deepest I have ever known. However, make no mistake, I do not fear what is to come! I want that life so much! I am not afraid of my destiny, or the future thrust upon me. I do not fear the day when I march against an army of a thousand rotting corpses. I am not afraid of the many battles I will fight! I do not cower from the thought of the many monsters I will face, and the many friends I will lose. Still, I am not afraid! No, none of that scares me!

Do you want to know what scares me? Do you want me to tell you what fills me with such terror and dread? It is this:

“I am so afraid that when tomorrow finally comes, it will come and go like any other ordinary day.”

The Story continues in The Squire and the Black Scroll 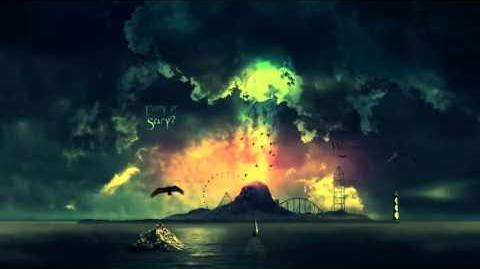 Creepypasta - day of the worm 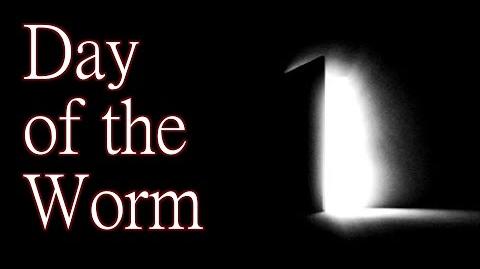 "Day of the Worm" by Killahawke - Creepypasta 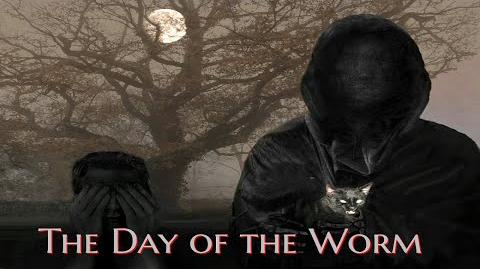 ''The Day of the Worm'' by Killahawke1 Creepypasta 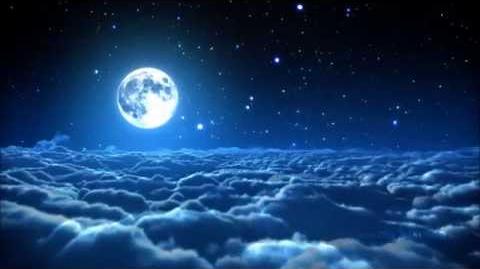 "Day Of The Worm" Written by Derek Hawke 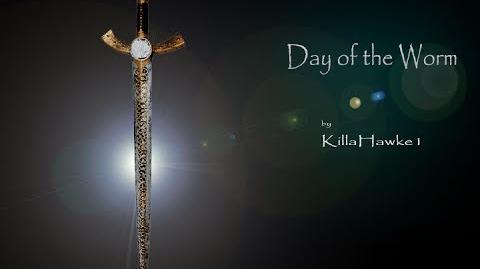 "Day of the Worm" by Killahawke1 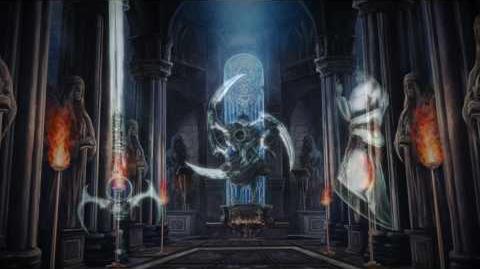 Written by KillaHawke1
Content is available under CC BY-SA

Retrieved from "https://creepypasta.fandom.com/wiki/Day_of_the_Worm?oldid=1300927"
Community content is available under CC-BY-SA unless otherwise noted.