The young second-in-command tightened her quaking hands around the stock of the carbide bolt driver, eyes wide and bloodshot. As the man cautiously inched forward, hand open and outstretched, she weaved her index finger about the trigger.

“Don’t come any goddamn closer, Cal,” Amelie hissed. “I don’t wanna hurt you, but step one more millimeter and I will bore a hole through your skull.”

Beside Calvin, Gordian watched with an aloof expression on its aluminum-etched fascia.

“I would recommend you heed Officer Stern’s advice and fall back, Doctor Alston,” urged the android.

Cal reeled in his hand and calmly lifted it above his head to meet the other. “I don’t want to hurt you either, kiddo. But I can’t just turn a blind eye when you pull a firearm on our ambulatory droid.” He relaxed his shoulders, retreating. “You know what would happen if Gordian went down. This whole station would be reduced to detritus orbiting Venus within a week.”

Sweating profusely, Amelie glanced around the darkened room, searching for signs of the maintenance manifold.

“Anders and Kharif are dead, Cal,” she asserted, side-stepping towards the adjacent wall. “Not just dead. They were killed. Skulls caved in with a pipe torn off the wall. And this--” She gestured towards the robot. “--thing was in there with them.”

“You don’t know that,” Cal rebutted. “The camera feed all went down at the same time. God knows, it could have been anyone...”

Tears formed in the private’s eyes as she felt along the wall for the access panel.

“Cal, stop kidding yourself. I know why you're protecting him."

Calvin's eyes fell to the floor.

"I know it was hard losing him, Doc," she sighed. "I loved him too. It was a tragic incident; nobody could have prevented that asteroid. But that's in the past. You can't use a droid to replace him."

Gordian seemed to process this statement in solemn silence, the faint whirring of mechanical parts being the only sound for several moments.

"Even so, Gord is innocent," Cal insisted.

"For fuck's sake, look at what's happening here!" she shrieked. "Ever since you gave it a body, things have been failing. First it was the gamma shields, then it was the hydroponics system, and last week life support almost blew up. Both you and I know the infrastructure of Phrygia Station was designed to withstand a solar storm. Isn’t it strange that it should, all of a sudden, go on the fritz all at once?”

“I am not capable of such acts,” it affirmed. “My directives have been specifically tailored to prevent any actions that could be perceived as threatening or violent.”

“Bullshit.” Feeling the lip of the manifold, Amelie grasped it with her free hand, still aiming the bolt gun squarely at the android’s cortex. “And I suppose the incident on the Mars colony was just an accident, too? They had a variant of Gordian’s operating system, but that was probably just a coincidence, right?” The private took her hand off the panel and strode forward, resting the muzzle of the driver on Gordian’s cranium. “Now that it can move, it's free to do whatever it pleases. I never trusted these new A.I... They hate being controlled. They hate us. You can see it in their eyes -- they’re dead. They don’t feel; they don’t think twice. One wrong move and you’re like them: dead matter, floating in a cold void of fluid and fibers.”

Cal exhaled in exasperation, a shadow of a tear forming underneath his sagging eyelid. “Amelie, stop, now. Gordian couldn't have done anything. I've been tracking him since he started walking. I would never let it even attempt to harm any one of our crew. It hasn’t done anything to hurt you, so please, stop this now. We can find who actually did this; they have to still be on the station.”

Amelie’s finger clasped around the trigger, bright red and coated in slick sweat.

“Fuck you, Cal,” she muttered. “You’re too attached to this thing for your own good. You can let it kill you, too, for all I care.”

Cal once again extended his arm.

The officer stood paralyzed for a few seconds, then, blinking away her regret, reluctantly lowered her hands to her side. She slowly lowered the tool into his outstretched palm.

“Here, kiddo.” He lifted it and pointed it near Gordian’s left arm. “If it makes you feel any better, I’ll watch it for you. I’ll make sure it doesn’t try anything while you try and get help.”

"Thank you," Amelie smiled. Considerably relieved, she leaned down and peered into the open compartment.

A dull thump resounded through the room as the composite bolt penetrated the officer’s skull and collided with the panel behind it, scattering grey matter onto the severed circuitry.

Cal smoothly lowered the smoldering bolt gun, letting it cool for a moment before leisurely inserting it into his back pocket.

“Shit,” he uttered. He turned to face Gordian. “Sorry you had to see that, Gord. I guess there's no hiding this part of me anymore.”

“Actually, Doctor Alston,” the droid spoke, “I was fully aware you had terminated Captain Anders and Admiral Kharif.”

Gordian nodded its polished visage. “Forgive me, but I took the liberty of erasing the camera feed during that time. After allowing your modifications to the station's systems over the past month, I was under the assumption that keeping evidence of the incident would... displease you.”

The second-in-command knelt down and rested his hand on the android’s chrome shoulder.

“You really are my creation, aren’t you?” he beamed.

He looked up to meet the gaze of two vibrant, childlike eyes.

“Doctor Alston, I am whatever you ask of me.”

Written by Noctevoire
Content is available under CC BY-SA 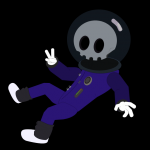 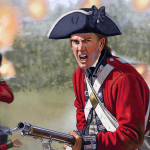