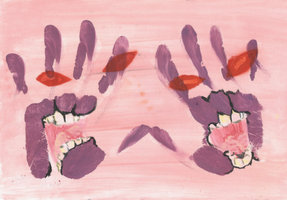 In retrospect, there were too many variables. An accidentally snuffed-out candle. A smudge in the salt. I should have known the ritual would go wrong.

Back in school, my friend - imagine! Me with a friend! - she told me that completing all the steps would let me read Martin's mind. He was just a boy I liked then. I thought it'd be great, knowing what went on in his head, knowing whether or not he was thinking about me. But, like I said, something went wrong. Which is how I ended up with Dainēd. In the original ritual, Dainēd was a guardian spirit who could influence the minds of humans, give them hallucinations or, like I said, telepathic abilities. But the version I got stuck with was nothing like that.

He started as a chattering at the back of my skull. I could feel him moving and I told my parents. They took me to the doctor who said I was fine, physically at least. All I heard were whispers, too many and too complicated to be coherent. It took some time before I could understand his thoughts in my head.

I must return to my kingdom, he said. I cannot be complete here.

These thoughts were terribly frightening to me as a child. It must have been even worse for my parents, seeing their only daughter tormented by the voice of some deranged imaginary friend. I was taken to many doctors and prescribed numerous pills, which only served to rile Dainēd even further.

One day, however, I calmed my thoughts until they were as flat and still as a mirror. I talked to Dainēd, and we agreed to be good to each other. If I couldn't help him escape the bony confine of my skull, I could at least placate his desires and help him feel a little less homesick. He agreed.

This wasn't always easy. For instance, our diets were in considerably conflict, as Dainēd's favourite food was carrion. According to the memories, he and the other demons were used to dropping animal carcasses in the sea - brining them helped to improve the flavour. As I was vegan, I wouldn't succumb to his demands for meat, but I would imbibe as much vinaigrette as I could stomach. The mixture of oil and vinegar, to Dainēd, was reminiscent of blood and salt water.

Whenever I was done feeding him, he'd tell me about the realm he used to inhabit - a world complete with inky-black seas, fiery mantel and dead woodland as far as the eye could see. He and the others liked to go around hunting the animals and burning everything else.

He doesn't tell me as many stories now, but I get snippets of his memories in my dreams. The hellish visions can be jarring when I don't expect them. I've lost friends due to the way I've behaved during a flashback, for example. But that's the least of my worries. All I really want is to keep my thoughts pure for as long as possible. Stay vegan, at least. Stay... sensible.

It's been seven years, and Dainēd has firmly rooted himself in my body. He has a more physical presence now. I'm fearful of performing any kind of exorcism in case I lose a piece of my brain to the maelstrom of a demon escaping my head. I won't even let a doctor touch me.

Once, I asked Dainēd about children. I've always wanted to be a mother some day, but he couldn't promise he wouldn't try to eat my child. That's the nature of demons, apparently. So, no kids for me. That's the sacrifice I make - to devote myself entirely to my one, solitary dependent, to placate him and to spare others from the unpredictable entity I've become.

My parents still think I'm crazy. The way I've been hearing voices and lashing out, they say, I could have schizo-affective disorder or something like that. I suppose the only way to be sure is wait until my eyes start glowing red as Dainēd takes further possession of my body.

In any case, the sacrifices a possessed person makes are the same ones a mentally ill person makes.

The real horror comes from learning to live with it.

Written by FervidColt
Content is available under CC BY-SA

Retrieved from "https://creepypasta.fandom.com/wiki/Dissenting_Demon?oldid=804974"
Community content is available under CC-BY-SA unless otherwise noted.