Everyone remembers the show Doug, one of the original three Nicktoons.

It seemed like a pretty normal show about the challenges a young boy faced in his daily life, but I always got a weird kind of feeling from it.

Doug was always worried about something, and in most episodes he would have fantasies of everyone he knew cruelly laughing at him due to whatever problem he was facing that week.

Doug always came through in the end though, and every episode ended with him writing in his journal about how he had overcome his blown-out-of-proportion problem.

In 2005, I began to have dreams about the show for no apparent reason. I cannot remember the details, but they made me want to see the show again. The show had not even been seen in reruns for years at that point, so I could not think of any way to see it again.

To my surprise however, it came back for one week in Fall 2005, airing at 6:00 AM on weekdays. I watched it for all five days. The first four were episodes I remembered, but they did not sync up with my memories perfectly. It had been a while, so I just chalked it up to flaws in my memories. The Friday episode, though, was something I was positive I had never seen before.

It started with the normal intro with the line drawings, but the characters never appeared. The lines continued as normal, reacting as if the normal characters were there. Once the intro ended, it switched to show Doug in a dark room, writing in his journal. He was not narrating his writing like he usually did; he just silently wrote for about a minute. The screen faded out, and the usual episode title screen appeared. Yet there was no skit this time. There were just giant letters forming the title Doug’s Real Life.

The episode opened with Doug eating breakfast. He was giving a voice-over about how there was a big test he had neglected studying for. As his family was having a normal conversation, the screen started flashing. The flashes seemed to be showing something, but they did not last long enough for me to figure out what they were revealing.

Doug left his house and began walking to school. During his stroll, he had one of his fantasies about his life being ruined. Mrs. Wingo announced that Doug had flunked the test, and the entire class started laughing at him, with their heads swirling around Doug. This went on for longer than most fantasies, and the laughter sounded crueler than usual.

When Doug got to school, the screen flashed again. This time, it stayed on the new image, or, rather, the new animation style. The colors were darker, and many objects had changed color. It resembled a negative film. Doug was walking through the school hallway, which was full of kids who had never been seen on the show before. No one paid any attention to him. After Doug got to his desk, the animation switched back to normal.

Suddenly, for no reason, the scene changed to after school had ended. Doug was walking home, worrying to himself about the test. Upon reaching his house, his dog Pork Chop greeted him. Doug began talking to him, until the screen flashed. Pork Chop turned into a hunk of rotting meat, and Doug’s house became decrepit.

Doug went into his house and acted as if he was talking to someone, though it was completely deserted. After interacting with invisible people for a while, he sat down at an empty table. The screen flashed again, and Doug’s family was there with him, eating dinner.

The phone rang, and Doug’s mom answered it. Doug instantly thought it was his teacher telling them about him flunking the test. Doug had a fantasy about his parents yelling at him for failing. In it, they grew to be gigantic, and their faces became twisted and dark red.

The screen flashed back to the empty house. Doug was crying and apologizing, but there was no one else in the room. He went up to his bedroom, which was completely empty except for a book and a pencil.

Doug picked up the book and started writing.

He narrated this time. 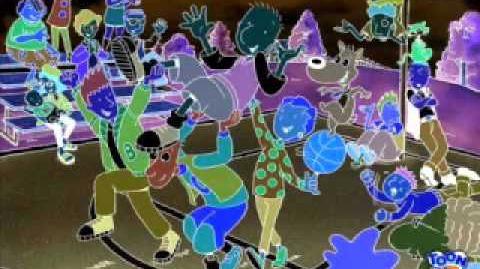 Retrieved from "https://creepypasta.fandom.com/wiki/Doug%27s_Real_Life?oldid=1386016"
Community content is available under CC-BY-SA unless otherwise noted.