Doug trips out on LSD to cope with the traumatic experience of Mr. Dink molesting him.

When Doug moved to Bluffington, his new neighbor Mr. Dink immediately took note of him. The first thing he did was invite him into his house just to “show him a movie”. The next day after hanging out in Lucky Duck lake he was washing the mud off of Porkchop. Suddenly, Mr. Dink shows up in the bushes with a camera. He claims he was only trying to get a pic of a “Neematoad” but clearly he was trying to get a pic of his young new neighbor.

Mr. Dink is always inviting Doug into his home to show him a new “very expensive” product, but most of the action is never seen so we never know what Mr. Dink is doing with Doug. One would be curious about why a grown man would be constantly inviting a kid to his house much less lending out expensive equipment that is prone to breaking. Mr. Dink always offers for Doug to work on any project in his shed. This shed had a lot of security measures on it (surely Bluffington isn’t that dangerous.). Why is this? Perhaps to warn Mr. Dink if someone (such as Doug’s parents) is on the way and if he needed to clean up. Also, why is Mr. Dink letting an 11 year old boy use his equipment and resources for free? There must have been some sort of payment Doug was making to Mr. Dink.

Also, Mr. Dink has no kids. He is also the scoutmaster of Doug’s Bluffscout troop. If that’s not creepy enough, you may recall the episode where Doug, Skeeter and Mr. Dink get lost on a canoeing trip. Mr. Dink travels into the woods to try and find camp. Eventually Doug and Skeeter go looking for him. When they find him, he is completely naked in a tree looking down at them. “SORRY BOYS MUST’VE LOST MY PANTS HUK-HUH”…HOW IS THIS NOT A RED FLAG?!

A confused Doug found peace in a curious substance his sister brought home. Though we never truly see Doug receive LSD from Judy it is suggested. Judy is adamant about Doug keeping out of her room. (Remember the episode when Doug had to sneak into her school? Judy was fucking PISSED that Doug went through her stuff at home) Perhaps this is due to Judy discovering that Doug was take a piece or two of blotter paper. Then there was the episode where Doug was home alone and Doug snuck into Judy’s room. Why would he doing that? Surely he has seen her room before. Maybe he was going in to get something…specifically hallucinogenic drugs.

It’s important to note that you must make distinctions between Doug’s day dreams and his acid trips. Typically, Doug’s daydreams are more fantastical and have no effect on the world around him. Doug’s acid trips tend to be more “realistic” and show a distorted view of the world around him. In addition, Doug’s interactions with his hallucinations are usually observed by other people who are viewing Doug.

Examples of Doug’s hallucinations are as follows:

The episode when Doug gets his new super pretendo. Doug's first hallucination is when he is in space and suddenly he's in the classroom and Miss Wingo says "Doug what are you doing?" Doug has absolutely no idea what just happened. Roger says something to him and Roger suddenly becomes pixilated. Then Roger says "What're you staring at Funnie?" Also in this episode, Doug is looking at his school book when the island transforms into a spaceship and begins flying around Doug. Doug’s eyes follow this imaginary spaceship.

In the episode when Doug goes camping with the Boy Scouts, Roger tells Doug to go get some firewood. While he's in the woods the tree next to him starts moving. The forest gets all colorful and wavy and Doug hallucinates that he is seeing green creatures on the ground. Doug falls down and suddenly purple vines are above him. Then, everything goes back to normal, with Doug on the ground and Roger dangling some rope above him. Everyone laughs at Doug for freaking out.

In the episode with the scary movie… Doug starts this hallucination when he's at the theater. Suddenly, everything is very dark and forbidding looking. The trees have faces and are whispering. Doug looks up at the traffic light which transforms into a giant spider. Doug ends this trip inside of his house. There are no scenes of Doug in the normal world returning home. He goes from the theater straight to his bed.

In the above mentioned episode where Doug is home alone, he sneaks into Judy’s room for no apparent reason. Later when he goes into the basement, Doug begins hallucinating. All of the items transform into various creatures that threaten Doug. Doug, being terrified of these hallucinations attacks one with a vacuum. It is revealed that the creature he attacked was simply a mannequin…

These are but a few of many hallucinations... 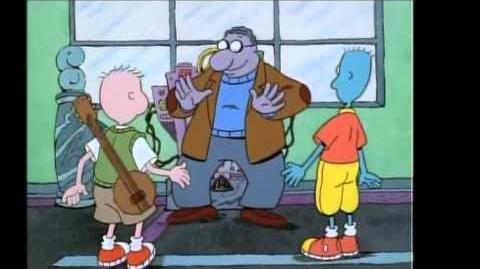 Retrieved from "https://creepypasta.fandom.com/wiki/Douglas_Not-So-Funny?oldid=1383128"
Community content is available under CC-BY-SA unless otherwise noted.