I think the world would be a better place without me.

And no, I’m not expressing that as a self-pitying, depressive state, because I’ve been there in the past, too. I’ve known that rock-bottom, self-fulfilling prophecy of despair; that looping existential nightmare that leads you on, tells you you’re better, and then dumps you head on into the pool of self-destruction once again. The rancid, despicable truth is that if it were that, I’d be so much happier, because I know how to deal with that.

No, the reason I think the world could very much benefit if I was snuffed out, is chiefly because of my school writing. 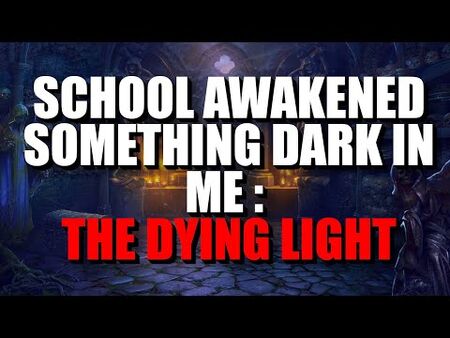 Well, that’s as far back as I can trace this line of reasoning, anyway.

It began with my tenth year in education, in secondary school. I had always had an affinity for English lessons, creative writing in particular. It came rather naturally; the pen flowed through my hand, fused like an extra limb, nerves and all. I’d write until my fingers grew numb, the inky scrawls spanning the entire page in my spidery style.

The stories I’d write were of many genres, tones, and purposes. I remember we were given prompts in class, five minutes of writing at a time, and the flash-fiction I’d create was usually praised well, whether it was about the personification of a swing-set, or the plight of a crow. Usually.

There was one such occasion which deviated from this trend, and coincidentally, (not really), this was the piece that I am talking about when I refer to my aforementioned assertion that I should not exist on this planet. This piece was unique, and I believe that euphemism works a lot better than the bluntness of what my teachers called it.

The context surrounding it, was a mock exam for our GCSE English paper. During this Imitation exam,

one of the questions involved writing a narrative; and this narrative was to be created within the guidelines of prompts, of which there were three.

That was the one I chose.

I find it funny in retrospect, because my teachers didn’t seem to think that I’d followed the writing prompt at all. I beg to differ, the events that transpired were in fact unusual, and absolutely took place on a Thursday afternoon.

The narrative was focused around Dog, a grave robber living in Victorian London, and his mistress Mabel. I had chosen to make the centerpiece the man’s struggle with mental illness, and desire to have his way with the many corpses him and his partner stole, the lust for the cadavers at odds with his morality, leading to the invalid questioning his own humanity, whilst trying to maintain his profession in fear of his dominant superior.

And quite rationally, I was called in to talk about it.

A 15-year-old boy writing about such heavy topics would raise concerns, and it concerns me now, but it didn’t back then, because I had no knowledge of what I know now.

The teachers were extremely patronizing, asking me why I had those kinds of thoughts, if everything was okay at home, and that I would have to redo the entire paper. I found it very irritating at the time, for they seemed to not see the irony in their open disgust at the content I’d written about.

During the course of the term, we’d been given poems to analyse as part of the curriculum. Amongst these were two stand-outs: “The Farmer’s Bride” and “Porphyria’s Lover”. The irony lies in the content in these poems, for if one were to analyse the poems in depth, they’d find that there are some very dark subjects indeed, which means that the very thing my self-righteous teachers were condemning was being fed right into my young, impressionable brain.

Regardless of their disdain, my life went on as usual. I redid the paper, and passed easily. My parents remained uninformed, which they were about a lot of things, and I was an otherwise unproblematic student, so my mature writing wasn’t a huge safeguarding issue for the English staff, despite their pontification seeming otherwise.

Which brings me back to why I should not be here.

That story, those poems were a small seed in my mind, and that little tiny speck became a larger and larger part of me as I aged into adulthood, like an intangible tumour, a capsule containing my inner depravity.

This seed first presented itself to me explicitly in college.

I found myself revelling in bisexuality. I’d looked at the women around me and felt some were exceedingly appealing, and that I’d wanted some sort of romantic, or perhaps even sexual relationship with them.

Men were a different story.

I felt that same attraction, that same lust for a man. The same desire for a romantic life with one, to sleep with someone of the same sex as me. But there was more to it than just sex; there was another need. I liked to watch the men as they studied, taking in every feature, undressing them with my eyes intensely. I found I had a type. I liked the skinny ones; the non-talkers. The mopey, disenfranchised guys who enjoyed alternative interests.

It was at the library where I fully realised what this need was.

The mousy-haired boy reading some fantasy novel adjacent to me on one occasion made me understand what it was, and it terrified me.

I wanted him dead.

And after the penny dropped, I couldn’t stop.

I began to grow more and more obsessed, this dirty little secret molesting my mind as I fought to stop it. Who could I tell? I was a man now, I’d be called insane. No one wants to be friends with a man with those kinds of thoughts. And so I shoved them down into the abyss, deeper than I’d ever internalised anything.

Speaking of friends, I had a few close ones of varying genders. None of them caught on, because I was careful. I’d use all my willpower again and again during my lessons; The urge to fantasise was proving almost unbearable. I’d finally let myself release after I got home, brazenly pleasing myself in earnest, the day’s struggle finally over.

I did manage to get through college, with three B grades in the subjects I’d chosen, which takes me to my post-college life.

I’m exhausted, and I’m not going to be able to keep the fantasies in my head for much longer. The flat I reside in reeks of depravity, and I’m almost out of effective deterrents.

I have had an increasing amount of flings in recent times, and with each encounter I find that sating my cravings is becoming nigh on impossible. I had a boyfriend at one stage, too, earlier this year. He was a lovely man, and we’d had a fruitful relationship. The problem wasn’t with him. It was with me.

He liked to think he was in control, the dominant personality in the relationship, and I liked that; I didn’t mind the subservient role in the bedroom. Not only did it keep my feelings in check if someone else made the rules, it also was my preferred position. However, as good as it was, I had to end it. I couldn’t continue when I wanted to kill him. I couldn’t make love whilst I looked into his eyes and saw only death. And so, on our final date, I told him I thought we should see other people.

After that, I became what I am now. An internal wreck who just about manages to keep a decent public image in a retail job, with no aspirations, and an intense desire that ruins my intimacy beyond casual intercourse, because they don’t matter to me; they aren’t important. And so I fill my free time with one night stands and saucy meet-ups in Soho to keep the urges at a reasonable level.

I have a date tonight, in fact.

Roger, his name is. Handsome redhead from Leeds, skinny but not underweight, with the aloof but dominant nature I enjoy from my men. That’s right, my men.

I know I shouldn’t go; I should end myself before it’s too late. I know in my gut that I won’t be able to stop this time. But I can’t. I should, but I just can’t. The fulfillment is easier to agree with than the mental gymnastics it would take to pull myself from this urge-induced stupor.

I don't hate myself, I just know my thoughts are wrong.

It’s no use. I’m not strong enough. I’m beyond reach, beyond therapy. My thoughts are soon to become reality, and once I’ve sinned, only the devil can help me.

I look at myself one last time before I leave, adjusting my rectangular glasses that enhance hazel eyes, my long curled locks of ash framing it all.

This is why the world could do without me.

Written by ZugZuwang
Content is available under CC BY-SA