As you may know, the popular show "Ed, Edd and Eddy" has been running for a long time. However, between October 7th, 2003 and October 21, 2003 episode 34 was accidentally released one week before it was scheduled to.

It was also known to some around the office the primary writer had been sick with the flu, and instead of going on to make episode 34, the show was supposed to replay episode 1. At 5:00am eastern, people reported a very disturbing new episode premiering on Cartoon Network - some children were unfortunate enough to see it.

Apparently the quality of the episode was mediocre when held to the regular standards. Animation was choppy, sound was constricted and very muffled. Reports of a line running up and down, similar to a crappy VHS tape were received. Scenery was described as "overwhelmingly dark and depressing without changing props and other background objects; stormy looking."

Characters also behaved oddly. Instead of the normal goofy, hi-jinks inspired personalities, viewers complained they seemed extremely agitated, gratuitously hateful toward each other, and constantly about to begin sobbing after the lines. The protagonist also had a very bad lisp - no one knows why, but he spoke with a sexual tone and that further bothered the viewers.

I was one of these viewers.

The episode began with Eddy walking down the street with Ed. I noted that Edd was missing. There was an angular shot coming from in-front of the two to show them walking toward the viewer. He (Eddy) was wearing the angry look he does when something goes wrong, his eyes were red around the iris. Ed looked absolutely forlorn and practically dragged behind Eddy, tears in his eyes - which were both lazy and looking in opposite outward directions.

Kevin, the series antagonist was riding his bike opposite of the Eds, toward them. The shot became blurry and low moans were heard coming from Eddy before Kevin hit him - which never happened because the screen went to black.

The screen then snapped back and Kevin was again headed toward Eddy - the view was so blurry this time all I saw was a green blob headed toward a yellow one. Again, the low moan, only this time it sounded like the microphone was broken and loud static came, greatly overshadowing the moan.

A claymation sequence of Double D sleeping in Eddy's bed came up. Honestly it may have just been the abruptness, but I jumped and shivered. Waking up and getting out of bed, he moved oddly around the circular room, the fast pitter-patter of footsteps being the only audio. The steps' sounds were very clear as I was shown a birds-eye of him scampering around the room.

There were no visible doors.

Edd began screeching (sounded like a Fisher Cat) as he moved wildly around the cell of a room faster and faster until the screen began blurring again, the purple room's color swallowing a now orange blur.

An extreme close-up of Eddy's front door sat, in absolute silence for a maddeningly long time - at least two minutes of dead silence and a door.

Next we see Jimmy and Sarah at a doctor of some sort (probably oral). Jimmy, obstructed in view by a hanging lamp, is crying loudly with Sarah trying to comfort him in an unusually warm fashion. 'It hurts Sarah... it hurts...' Suddenly, the door of the room in smashed open by a new character, a dentist. His face wasn't shown because he was tall enough to be out of the shot. Sarah was escorted out of the room, Jimmy was shown. His head gear was mangled, the front bent upward, stretching his lip very high-tearing proportions. The front of his gums was trickling blood, and teeth were missing. The disturbing part was he had lost both arms and legs beforehand apparently, and sat a paraplegic. I almost cried as I came to the conclusion the others had beaten him up and bent his head gear. The camera stayed on his mangled face for a few seconds, still as a picture, silent as ever.

Nazz is reading a magazine on her couch. The quality is now perfect.

Eddy is now alone, without Ed. The quality declines worse than before and he is still walking, the sun now lightening the mood somewhat as he smiles and begins running. The door is shown again and we see through Eddy's eyes as he reaches out and opens it. His house is nice and bright, but a very badly played violin is blaring - the only audio in this scene as he makes his way through the house. Eddy opens the door to his room.

Johnny is shown under Nazz's couch cushion as he crawls out on all fours in a comedic way and pops up behind her, still oblivious. I laughed because someone forgot to draw his eyes and I thought of a mole. Suddenly I stopped laughing as he starting swallowing her head, still in a cartoonish fashion of course, but this was different. He and she stayed like this until she started kicking and struggling. Johnny held her like this until she went limp. A zoom in on his face revealed extremely small, human eyes.

Double D was laying on Eddy's floor, no longer in claymation. The camera showed Eddy's house for the remainder of the episode (about 3 minutes), and the next program began on the spot. 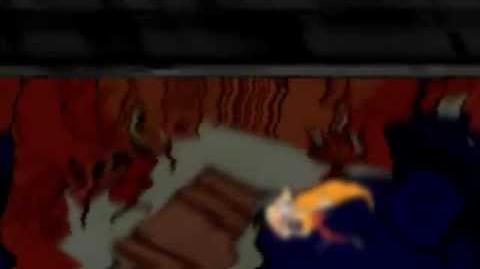