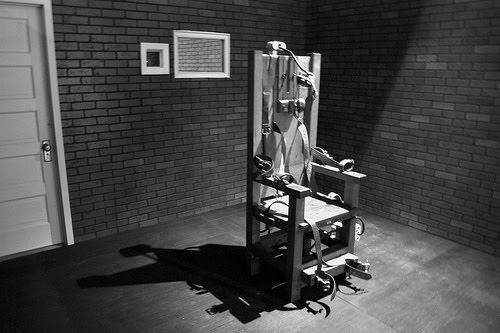 Right from the first ever electric chair execution in 1890, the victim being the calm and calculated murderer William Kemmler, the electric chair has played a key role in capital punishment and executions in the history of America.

Once a criminal has been convicted of murder or other extreme crime, they were sentenced to die. If the chosen method of execution was electrocution, first their head would be shaved and they were to be attached to the chair using the head and leg straps.

Then, a number of people would stand in a viewing room, each individual ready to flick a switch in unison on command. However, only one of the switches would activate the electric current, therefore it would remain unknown who the executioner really was.

Once the corresponding switch was flicked, various cycles of alternating current would be passed through the victim’s body, destroying the internal organs and frying the corpse with the intense heat. The first jolt of electricity was designed to cause immediate brain stem death in an effort to make the execution as humane as possible. Any further currents were designed to cause damage to vital organs, ensuring the death of the criminal.

But the death was not always as painless and quick as it was designed to be. On a hot summer’s day in July 8th, 1999, an overweight psychopathic murderer was sentenced to die in the electric chair.

Almost sixteen years before, Jack was convicted of the murder of two young girls and a woman, three months pregnant.

First, Jack beat the pregnant, screaming victim with the butt of a gun until she could no longer stand. Then, he kicked and punched her onto the floor and proceeded to put his weight on her back, crushing her fetus inside her womb and rupturing the skin of her stomach.

Beating her until her screaming ceased, he then grabbed the first girl, tore her hair out until there was blood running down the side of her face, and then shot her with the Magnum. He shot the other victim in the back, presumably whilst she was trying to run away.

It was unknown why Jack targeted these victims.

On the eve of his execution, Jack ate a last meal and his head was shaved.

The next morning, he was strapped to a new electric chair, which replaced the old, malfunctioning one.

The lever was pulled.

First, Jack began to convulse and vibrate in his seat as the current passed through his body. He also appeared to be clenching his fists. Much to the surprise of witnesses, muffled screaming and choking could be heard coming from underneath the leather restraint which covered his face.

As the body convulsed and the screaming became louder, the witnesses became anxious.

Suddenly, a drop of blood appeared on his shirt, and then another. As the blood began to drip from underneath his facial restraint down his neck, the voltage chart showed that since Jack was so notoriously overweight, the voltage might not have been powerful enough to kill him in an instant. It was over a minute, and yells could still be heard.

More currents were passed through his body, each too weak to produce quick and fatal damage. The groans stopped abruptly. Jack’s convulsing body still vibrated in the seat. Moments later, a sizzling sound could be heard. Swollen blood vessels could be seen underneath the inmate’s pinkish pigmented skin.

A ghastly stench began to fill the execution chamber. Even though the witness room was sealed away, the smell was so strong that there were orders to leave the building.

Jack the murderer was pronounced dead at 7.15 AM.

After some time, the Supreme Court of Justice released photos taken after the execution to the public. In one of the photos, the overweight inmate appeared to have swollen, purple eyes and a large red flow of dried blood going from his nose to his shirt, where it stained most of the white material.

His skin was indeed a pinkish tone, also looking a little blue.

This simple execution intended to be quick and flawless - nothing out of the ordinary, was one of the most blotched executions in the history of Capital Punishment.

It was announced that this victim would be the last to be electrocuted in this electric chair.

Written by Rinskuro13
Content is available under CC BY-SA

Retrieved from "https://creepypasta.fandom.com/wiki/Electrocution?oldid=1233216"
Community content is available under CC-BY-SA unless otherwise noted.