My uncle Greg was the greatest fry cook of all time. I know that's a bold statement, considering there are fantastic chefs all over the world, but when it came to deep-frying, my uncle was the best.

In Kentucky, deep-frying isn't just a cooking method, it's a way of life. We're the state that gave the world the Colonel's secret recipe, after all. We have a global reputation we have to protect. The most popular deep-fried dish is easily chicken, but plenty of other meats taste great when coated in breading and burnt to a crisp in boiling hot oil. Fish, poultry, beef, pork, even sweets. Deep fried soda, ice cream, candy bars, even deep fried butter. Do you know what a hushpuppy is? It's just a clump of fried coating.

But there's more to the art of deep-fried cuisine than just the oil. Marinating your ingredients, seasoning them, and what I would argue is the most important part: the dry rub. My uncle was a master of the dry rub. When he'd set up a booth at the state fair every year, people would line up for what seemed like miles to get their hands on his dishes.

Pickle braised jumbo ribs, double-battered butter burgers, chicken-fried nacho sausages, mac and cheese chili poppers, and his unforgettable spicy, extra crispy chicken. He knew how to take the most absurd flavor combinations you could think of and always find a way to make them taste amazing. Cheese, ranch, onion, bacon, you name the flavor and he mastered it.

The man was a hillbilly scientist. He'd spend hours on his outdoor kitchen patio combining ingredients, testing different seasonings and spices, trying to find the boldest flavor combinations possible. One summer I helped him prepare dinner for a family reunion, and I just couldn't keep up. By the time I was getting my cutting board ready, he already had six different entrees prepared.

He won awards from every food festival in town, topped every contest. He was a local celebrity, more famous and influential than the mayor. But it wasn't enough for him. He had an appetite that only ever grew stronger. He was 500lbs by the time I entered high school, and he only ever seemed to get fatter. He didn't want to be known as the best fry-cook in Kentucky, he wanted to take over the whole world.

His extra crispy, extra spicy, extra fattening chicken was his magnum opus, the Citizen Kane of poultry dishes. It was so hot it could melt your head off, but so delicious you'd be just a pair of feet before you put it down. It was salty, savory, sweet, just the right amount of stringent and sour. It satisfied any flavor profile. It was decadent, the kind of food biblical kings and ancient Egyptian emperors would eat. The kind of food the gods on Mount Olympus would dine on.

It was fantastic, and it was always getting better. Uncle Greg was constantly tweaking his dry rub, his marinade, his breading, his aromatics, constantly adding new spices and taking old ones out. He emptied out entire shelves at superstores, butcher shops, and Asian markets. Strangers would visit his house in the middle of the night to ask how his newest batch of chicken was coming along, and he'd stand outside late into the night telling them about it.

Then came the day he finally found it, the perfect mix of everything he had made up to this point. The ultimate dry rub, a masterpiece of marinade and the world's best breading. He went through sixteen entire chickens in less than a week it tasted so good. The smell was so intoxicating I could smell it from halfway across town. He had done it. He had finally found the perfect flavor.

Everything tasted amazing with it. Chicken and turkey were the first meats he tried, and soon he experimented with beef, pork and lamb. He fried just about every fish in the sea, and every vegetable in the ground. He fried fruit, he fried candy, he fried bread. He’d even fry chicken skin and eat it like potato chips.

Unfortunately, we never got to try his new secret recipe. He stopped coming to family gatherings, never bother with state fairs again, never even left his house. He wanted it all to himself. Even his wife didn't know the recipe. She was growing more and more concerned by the day. She was a health-nut, never bothered eating what her husband made, they didn't even use the same kitchen. So at first, it all slipped under her radar. However, by the time he had built a shanty wall around his patio to keep the smoke from escaping, she knew something was very, very wrong.

He had drained their savings dry buying all sorts of fatty meats, and eventually she closed all their accounts and refused to buy him anything new. He started digging through the trash, using rotten food from the back of the fridge -- it didn't matter to him, the brine and skin would make it all taste amazing to him. The way the rotten ingredients squished and ooze as he chomped down, it was like they had some kind of creamy filling.

By the time she left the house, his wife was the last thing on his mind.

When I cooked with my uncle Greg, one thing I always thought was funny was when I would dip the chicken into the batter and roll it around in the breading, my fingers would get coated in the stuff. It made my fingers look like giant, uncooked chicken tenders. Apparently, Uncle Greg noticed this too. He'd always licked the batter off his pudgy fingers like a wild animal, but it was never as good as crunching down on the fried stuff.

One day, he got a little too curious. He looked at his fingers, covered in coating, and was salivating uncontrollably. In the blink of an eye, an impulse overcame him, and the rational part of his brain shut right off. He slammed his fingers down into the hot grease and held them there for a good five minutes. He made horrific, painful screams in pain like a dying rabbit, but after the first two minutes, the nerve-endings in his hand died, and he felt nothing.

When he pulled his hand out, his fingers were a shining golden brown, and the lower parts of his hand all the way down to his wrist had turned gray, with all the veins protruding out, black as night. He pulled his hand to his face and took a big bite into his thumb, hard enough to snap the bone in half. He chomped down on what remained of it, the breading crunching and crisping loudly in his jaws. He chewed on the rest of his fingers, from the index all the way down to the pinky.

He wasn't finished yet. He stuck the rest of his hand into his buttermilk marinade, rolled it around in the breading and repeated the process all over, this time chomping down on his palm while coating it in nacho cheese, onion ranch and a side of chopped celery. Y'know, to be healthy.

He deep-fried his severed wrist, and keep frying his arm past the elbow, all the way to his shoulder blade. Legend has it he didn't bleed a single drop. I don't know how that would be possible, maybe the oil cauterized the wounds? That doesn't make a whole lot of sense, but neither does eating your entire arm with a side of Doritos and some blue cheese dipping sauce. He repeated the whole process with his other arm, and then his right leg, and then the left.

When paramedics finally found him, his entire face was golden brown. Apparently, he stuck his whole face in the pot, fried it to a crisp and then used the over to scrap it off so he could eat it. Then, when his face was nothing but a gooey red mush, he jammed it back in there and fried it again, drowning in the boiling grease before he could further mutilate himself.

I found his secret recipe when the rest of the family were rummaging through the house, dividing his belongings among ourselves. I ripped it up and threw it in the garbage. I don't care how good it tastes, if it was delicious enough to make you eat yourself alive, it was too good.

My uncle was the greatest fry-cook who ever lived. Unfortunately, sometimes being the best isn't always a good thing. 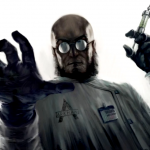