My life has always been pretty cheerful. This was made possible by my friends, family, a bright future at my university and nothing bad happening in my life so far. Everyone I know has nice thoughts of me as I have from them. All my teachers and I get along well and, despite having no other known relatives than my parents, I didn't really care much. I always thought of my friends as brothers. I had, however, something I hid for years.

I, like many other people I know, am a 90's kid. I'm pretty sure even adults liked those years too. Video games, simplicity and good TV cartoons.

So, the not-so-wished dream of becoming a "cartoon tester" got to me when I was just 6 years old. My parents accepted delightedly when I told them I wanted to be one. After all, it was the perfect "job" for someone at my age. So when people came to the house to ask my parents, I wanted to be it so badly. Nothing went actually wrong so one afternoon they took me to "Nickelodeon HQ." I was so excited to see everything they were going to make before anybody watched it in the first place. My friends would be so jealous.

So I stood there in a room with a big TV and a DVD player (the first time I actually saw one) and like 5 other kids that were like me, expecting to watch cartoons all day. The room was felt somewhat like a living room, probably to make us feel much more comfortable. It had a carpet, chairs, a table, potted plants and a nice warm red paint on the walls.

A staff member came out of nowhere with a CD smiling at us. "We're going to make a new series on Nick Jr." he said.

"If you like it, then we'll send the first season to your parents in no time!" he said with a cheery tone.

All the kids and me started celebrating as the man inserted the CD inside the DVD player.

"I'll be back in a while," he said with a bright smile as he left the room.

The TV went on a static screen, which was odd since it was the newest they had selling at that year.

It went static for a while and it started to show a warm fireplace burning. The camera then showed the whole room. No music was heard at all, nor did it introduce anything. The camera showed a chair faced at a window, showing stars and a night sky. The room looked warm and soft. A bald head was on the chair. It slowly turned, showing big, creepy eyes and a surprisingly realistic mouth.

Me and all the kids were surprised about him and his appearance and waited to see what happened.

A robotic and emotionless voice stroked on the silence as the man said, "Oh, I didn't see you there."

The camera turned around, showing a crudely made CGI body that happened to be the man's. He greeted us and said:

The camera zoomed on his creepy face.

"We're going to have so much fun together, just the two of us!" he pointed at the window.

"We can look at the stars together," he held a book.

"We can read a book together."

The camera went to the perspective of the fireplace as Gregory said:

"We can stare into the glorious flames of the fireplace together."

The silence crushed instantly, as all the kids looked confused and looked to each other. We waited for a while as Gregory's face stared from the chair into the fire.

His face suddenly appeared again and the camera slowly zoomed in.

"But no matter what we do, it will just be the two of us, and no one else in this room. Just me and you."

Distorted background music started playing as his face got closer and closer. Not only that, but his voice and the background itself started to get weird as transparent flames took over the place.

The movie ended with his paralyzed face all over the screen. Every kid started crying uncontrollably as the man from some minutes ago came in. He had a very angry look on his face as his words pierced through my memory. "You! I thought that guy learned his lesson long ago but...!" he yelled furiously as he got out of the door along with the other kids.

The screen went blank as I secretly took the CD. It had a clean, simple and plain text saying:

After a few days, there were some news about parents suing Nickelodeon for inappropriate content shown. They even got as far as labeling the incident as "a show that was ultimately rejected due to a poor focus group result." My parents were so frightened that they didn't let me get near the place (we lived relatively near Nick "HQ"). Until then, I kept the CD with me, hoping to understand, one day, the meaning of such a dreadful creation. 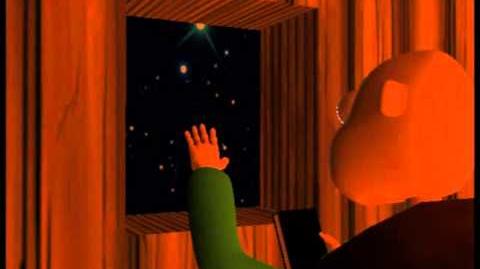