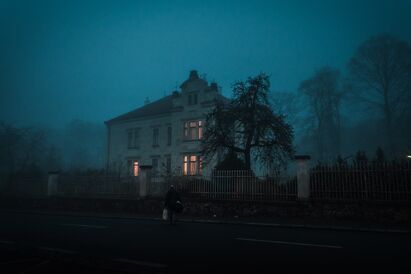 Once upon a time, there was a marvelous house, on a modest hill, at the edge of a quaint little town. The Happy House was a good house, it loved to make people happy, but it always knew that the people who would come to live within its walls would leave eventually. It struggled to understand the human mind. It made The Happy House sad to think about how lonely it would be without a family, as it wondered:

"Why do people leave me,

where do they go?

I make them happy,

but end up alone.”

The Happy House noted that the family seemed to want to change things on its insides. Some of it tickled, but a lot of it hurt. It didn’t want the family to leave, so it put up with about as much as it could, until it realized they were getting closer and closer to its heart.

The heart was a dark, moist room hidden behind the kitchen. It was always warm, but filled with strange devices and machinery. It was The Happy House's absolute favorite spot for humans to visit, but it was also the only part that was seriously at risk of injury.

the sadness would start!”

The Happy House winced in fear at the idea. It knew children were normally capable of less destruction, so it had a plan for its own preservation.

“There will be only one

who I’ll let inside,

Late in the night, as the daughter was sleeping, The Happy House noticed something concerning. The parents were awake in their room, panting and moaning, struggling to situate themselves properly. Struggling to sleep! The Happy House knew it had to stop whatever was happening to them, for this obviously couldn’t be making them happy!

“I know the way

to help them relax,

the shelf shall fall,

swift as an axe!”

No sooner did The Happy House come up with the idea, than the shelf fell, connecting with the father’s head, putting him instantly to sleep. The mother seemed ecstatic! She screamed with joy, and hopped out of the bed! She hurried to the phone and began to contact someone. It’s obvious that she was so thrilled, she had to share the news. The father never had trouble sleeping again.

For several weeks, The Happy House was so thrilled! The mother and daughter rarely left. The father didn’t do much. He had plenty of strange beeping machines around him now.

sleep half as well!”

The Happy House praised itself. It was worried that it had done something wrong, at first, because the mother, daughter, and sleepy father all left in a strange white vehicle, but they came back and things have never been happier.

The daughter had found the entrance to the heart, shortly after they returned. She certainly liked to spend time there, and this pleased The Happy House to no end. She’d often crawl into the lower cabinet, beside the fridge. The Happy House would gently shift its walls, to let her in. It could tell that she felt safe there.

With the father enjoying his rest so much, the daughter and mother went to see him less and less. They must have been worried about interrupting his deep sleep. It was very blissful for The Happy House, as it felt the father’s dreams. It saw many strange things, but mainly the family being together. It didn’t like that they weren’t in The Happy House in these dreams, but it was slowly working on trying to fix that too.

The daughter and dog

went for a walk,

the dog ran away

and gave her a shock!”

Normally The Happy House wouldn’t have been terribly concerned about the dog, but it had caused the mother and daughter to leave, in search of it. They’d been gone all day. The Happy House knew it had to do something to bring them back, but it couldn’t think of what.

As the hours passed, it dawned on it.

“It truly is rude

but waking him now

would be for the best.”

The father rose, confused and weary. He had a strange vacancy in his thoughts. The Happy House had never been this connected to a human before, it was truly a delight to know their mind. It bade the father to:

“look for the place

where the dog’s gone to hide.”

It didn’t take long for the father to find the dog, it grabbed it tightly by the collar. The dog began barking loudly. The Happy House knew the animal was causing far too much distress for the poor family, so it had to get rid of it. As the father gripped tighter, trying to stifle the dog’s barks and whimpers, The Happy House saw the mother and daughter running over. The dog slipped free, to the father’s surprise, and ran off into the surrounding trees.

The daughter was all too happy to greet the father, and hopped into his arms.

as it should be.

The dog’s better too,

Everything seemed to be coming back into place for The Happy House, but it noticed the mother hadn’t greeted the father yet. Instead she looked off in the distance to where the dog had run. For some strange reason, The Happy House could see something through the father’s eyes. Something it couldn’t see on its own. The Mother was not happy. She was concerned.

The Happy House also noticed, through the father’s eyes, that the mother was not truly happy. There was something missing. It studied the family for some time, trying to understand the father’s thoughts. It even slowly began to understand the strange noises that the daughter and mother would make. It seemed they were concerned that the father wasn't making noises too, anymore.

One day the mother made it clear that she wanted to live elsewhere. She wasn’t happy in the house! The images of the mother and father tossing and turning on the night of the father’s long sleep came into its mind.

I’ve given so much.

The father began to have a strange sort of excitement. Perhaps she felt the same way?

It made the father head to the bedroom, where the mother was packing her things.

she needs your love,

if she tries to resist

just give her a shove!”

The father mindlessly obeyed. He pushed her onto the bed as she yelled and wriggled about. The Happy House felt strange. Through its own eyes, it could see that she was happy, screaming in joy! When it looked again through the father’s eyes, it felt wrong and disturbing. He pushed her head against the backboard a few times, until she settled down.

“This is the right way,

I feel both their hearts,

for each other they yearn!”

The Happy House relinquished its hold on the father, hoping simply to spectate. It couldn’t help but notice the daughter had quickly run to the cabinet, and was entering the heart! She must be so happy her parents are reuniting.

The father stood blankly, over the bruised, naked mother on the bed. He was unsure of what to do next, without The Happy House, how could he know? Suddenly, the mother rolled off the bed, and started running down the stairs. She was yelling something to the daughter. She wanted the both of them to leave! The daughter was slowly crawling out of the cabinet, heading toward the mother.

With The Happy House’s commands once more filling the father’s thoughts, he swiftly went to the closet in the hallway, removing an axe. He stormed down the stairs to see the mother facing the kitchen, she reached for the daughter’s arm, but the father’s axe was too quick. It had been firmly planted in the mother’s skull, handle protruding outward as if lodged in a stump. The Happy House could no longer feel her at all. The daughter screamed, tears running down her face. She turned back to the kitchen, and fled to the heart. The Happy House, for the first time, could tell the daughter was scared. It could feel the terrible flood of negative emotions sympathetically through the father.

“The mother is gone,

at least she still lives!”

The father grunted in acknowledgement of The Happy House’s new command. The first sound of sentience since his coma. With a firm stride, he headed into the kitchen.

As the footsteps closed in, nearer and nearer, the daughter scrambled for an escape. She began yanking clusters of wires, clawing at the walls, and pulling at stray pipes. The Happy House started to writhe agony as she damaged the machinery. The foundations began to shake.

With no hesitation, the father swung the axe into the wall, again and again. He was able to see her through the gap. She screamed ever louder, banging on some strange infernal machinery inside. The father hacked, and hacked. The Happy House began to feel weak. It tried to issue one last command to the father:

but I can’t let you free.

If I lose my strength,

The fog had now cleared, thoughts had returned. Terrible pictures, in his mind burned.

He questioned his brain,

He struggled with what, and how he should feel.

“My thoughts are riddles,

The Happy House voice, then chimed in his mind:

“With the last that I am,

now we are one.

by what we have done.”

he cried out in shame.

One final idea, he knew it his own:

He gently blew out the pilot lights, and cranked all the knobs on the oven. After closing the kitchen door and windows, he sifted through a drawer, finding a matchbook. The man sat down, no longer a father. No longer a husband. A deranged cadence of protesting thoughts assaulted him as he waited. He could smell the gas building, he felt light headed.

you know not what you do!

The Happy House pleaded, in desperation.

This is the way,

he said aloud as he struck the match.

“Still to this day,

in the local’s renown:

Go to the woods,

by the edge of town.

will call you a liar.

be ready to pray.

Ignore all the whispers,

There’s a dog in the ruins,

up in the ashes 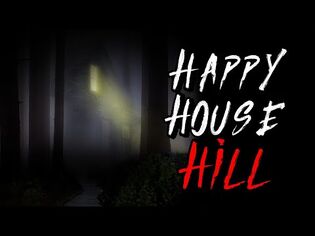 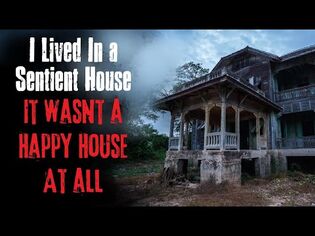 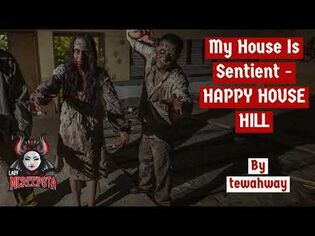 My House is Sentient - Happy House Hill by Terahway - Creepypasta-2 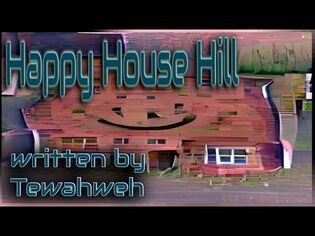 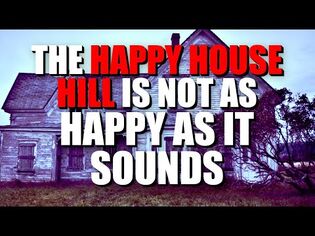 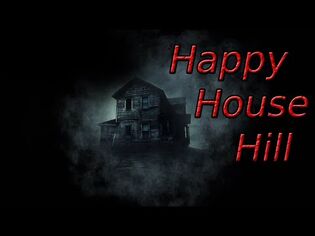 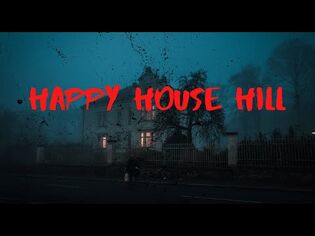 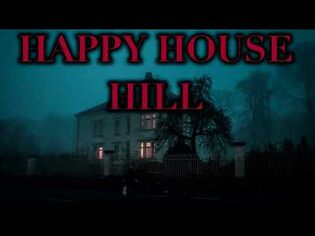 Written by Tewahway
Content is available under CC BY-SA