It was 11/11/11, and my friends and I were having a great sleepover at my place. We made a deal that no one should sleep, you know, so we could enjoy the sleepover while it lasted.

It was around 10:30 PM, my parents were already asleep, and we need some grub to keep ourselves awake. We had planned to make a "ghost hunting film" outside the house. My friend, Jaebhy, brought a HD camera with a night vision function, which was enough to suit our filming needs.

Since I was too lazy to go to the nearby 24-hr convenience store, I told my friends to buy some noodles and batteries for flashlights. I told them to bring a flashlight since the alley that they would pass through doesn't have a single light to illuminate the way. Taking a large flashlight from next to the door, my friends headed out to the shop.

Only a few minutes later I realized that they had taken the camera when they left. I thought I'd miss out on all the fun, so I checked on the front window of our house to see if I could catch up with them.

Unfortunately, they had already disappeared down the street. It was way too dark outside to try catching up to them on my own; I just have a minor fear of the dark.

Just as I was about to go back to the computer where I'd been sitting, something caught my attention from outside the window. From what I can remember, it was a tall, thin man, with dark colored clothes. He was walking towards the alley in such a disturbing manner, I thought he must have been disabled or something; I could see the struggle in his steps.

A few moments later, his face slowly turned towards me. By now I was a bit creeped out, but I felt that I couldn't look away. As I stared fixatedly at the strange man, I noticed something... wrong with his face. It was white, I mean really white, and I could barely make out his eyes. I didn't even see his face move or anything, as if he were wearing a mask. Yes, it really had to be a mask.

Finally tearing my eyes away from the disturbing sight, I crept back to my computer and surfed the net. I just need something to calm me down, I thought. The man I saw had sent a cold, lifeless stare directly at me. Shivers were still running up and down my spine as I sat there. I never wanted to see him again.

At about 11 PM, my friends came back. They seemed all confused and scared, which made my thoughts wander to the man I had seen. Had they seen him too? That was when I noticed that one of my friends, Mark, was missing.

My friends explained that after they had bought their stuff from the store, Mark was left alone for a few seconds. Next thing they knew, he was gone. All they found was the camera.

I immediately felt suspicion along with my mounting terror, so I removed the memory card from the camera and plugged it on my computer. I noticed something strange: all the other pictures and videos that were shot by the camera before my friends went out were gone, and all that was left was one new video. The exact title of the video was &%#%$###1# 11/11/11. I couldn't understand how the video ended up having a name like that, so all I could think of to do was... watch it.

The content of the video was actually footage of my friends on the way to the store. It was Mark who was holding the camera, and my other friends seemed to be annoyed because they didn't want Mark to waste the batteries. Apparently that was only the first clip of the video; it suddenly cut to a blank.

The next clip was Mark focusing the camera and the flashlight on my friends. They were starting to get really mad, but Mark didn't really care. Along the way, Mark got footage of another person walking along the alley. The person was walking very slowly and seemed to twitch a little. I felt sick. It wast the same man, the same terrifying person I saw from my window.

A minute later my friends got ahead of the person, but something wasn't right. There was a little tone of white noise that seemed to gradually be getting louder. After a few seconds, Mark focused the camera on the other person. The camera got all static and repeated a few frames, but through it all I could just make out the face of the person. My suspicions were confirmed: it was the same man I saw earlier. His face was also white, and it really did look like a mask.

Now this was really getting into my nerves as the clip cut to a blank again. The next clip was actually focused on my friends reaching the convenience store. Mark was filming the products of the store, then he went out for a bit and filmed outside the store. I noticed that he was getting more and more sightings of the man in the mask. Strangely, every time the camera focused on the man, white noise could be heard, and the picture would get distorted and repeat some parts of the clip. But what I noticed most about this part of the video is that the man's head was twitching rapidly with tremendous speed, but the rest of his body was just blankly facing Mark.

After another blank cut, the next and final clip was played: it showed my friends leaving the store, and Mark, as my friends had told me, was left behind for a while because he needed to tie his shoelace. White noise was observed again, and this time it got really loud. Mark started running to catch up with our friends, but out of nowhere, “the masked man” leapt out and began sprinting towards Mark.

This was the only time I caught a really clear glimpse of his face: it was a mask, a pure white mask, with stitches on its mouth and eyes. Mark seemed to collide with the man as I could hear his scream of utter shock, but white noise suddenly distorted the audio.

All that was left was Mark struggling on his back against the ground, and the man was in front of him, staring at him. I noticed that his mask was making a sad, regretful face, judging by the stitches going down. More noise cut the video, and it repeated that part of the clip. But this time, the mask of the man was smiling, and he was slowly reaching his hand towards Mark's face.

I could hear the Mark's unbearable scream as the man dragged him away, but suddenly it all cut to static noise. Since then, my friends and I have been carefully observing every part of that video. We can still define some subliminal close-ups of the man's mask.

This video vaulted me straight from anxiety and suspicion to downright terror. I am still getting some sightings of that same man from afar some nights.

The morning after the sleepover, my desktop was filled with an mp3 file called: BEGIN.mp3.

I listened to it; it was an 11-second mp3 file containing white noise and distorted screaming, and I could hear a faint murmur at the end before it cut to a bleep for the last 4 seconds.

It took me 2 days before I managed to decode some parts of the mp3 file. I tried to remove the noise and I reversed the murmuring. My eyes grew wide with terror as I heard the words “YOU'RE NEXT” uttered in a distorted deep voice...

Sometimes I can also hear in the mp3 file the name “COLLECTOR”, followed by distorted laughing.

I highly advise you, please, stay in a group when going out at night. Never stray from the group, even just a few meters away, for we don't have any information regarding that man. His whereabouts are still unknown. 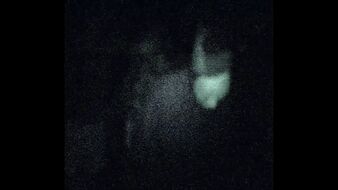 Pic of the man before staring at the camera. 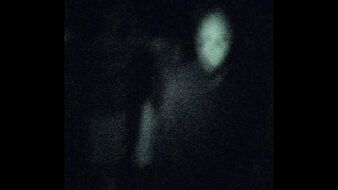 Pic of the man staring at the camera, my friends were at the back. 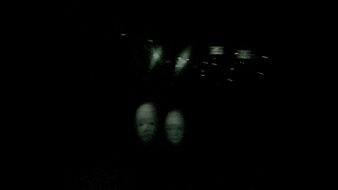 Still a pic of the man running towards Mark. 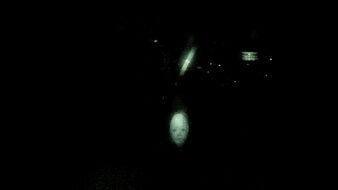 Sighting of the man running towards Mark, the mask stands out from the darkness. 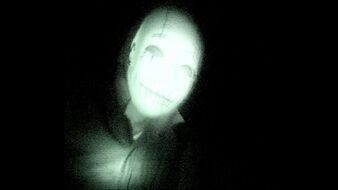 Last sighting of the man, smiling. 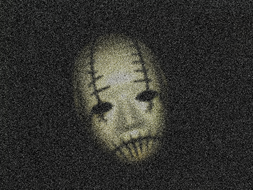 A subliminal capture I found on one video I received from the man.
Add a photo to this gallery

Approximately 2 months after the shocking video was seen, I've still been haunted by his subliminal messages. I can still get a glimpse of him just standing outside of our house every night. My mind is clouded with fear; I can't eat, sleep, or study well because of him.

One day while I was checking my email on the net, I was surprised that my spam folder was filled with 999 messages, which made no sense because I frequently delete all the spam messages I receive. Plus, I only get about 10-20 spam messages per week, not hundreds in one day. What was really unnerving about these messages is that they are all the same, all entitled "GOODLUCK", sent by a blank email address. I hesitantly clicked on one of the messages and suddenly my computer just started to download the attachments contained by it. My antivirus software couldn't even detect a single thing, as if everything was completely fine.

I received a zip file, containing 1,027 different individual files. Some were .wav files, or .mp3, but most of them were txt files and jpegs.

From what I have read, the files are all about the man that is haunting us. The txt files seem to be blog posts of different people from all over the world, sharing their experiences with that man, and some information that they noticed or gathered about him.

I have only read 46 of the txt files so far, and I took note of the information that may be useful to every one of us. I gathered these from several files, hope they can be really useful:

"i can't see shit until I looked through my cam, he was right in front of my face!"

"I think that he only appears in cameras, or should I say only visible in cameras, it doesn't matter what kind are you carrying, just don't forget to bring one!"

"He will never stop to COLLECT what he NEEDS"

"...if you hear white noise, it will be and always will be a sign that his presence is near."

I'm still searching for posts that reveal how to stop his hauntings and I will post any more info that I find necessary. I'm also able to capture a subliminal picture from one of the videos that I received, hopefully it won't do any harm to post it here.

Retrieved from "https://creepypasta.fandom.com/wiki/His_Own_Collection?oldid=744437"
Community content is available under CC-BY-SA unless otherwise noted.