My eyes flew open when a hand clamped over my mouth.

“Don't move,” the man leaning over me commanded. A knife glimmered in the darkness.  A surge of fear jolted through me. Without thinking I thrust my hand upwards into his face and felt my palm meet his nose with a revolting crunch. When he howled in pain I hurled myself out of bed and dove into the adjoining bathroom. I slammed the door shut and turned its lock only seconds before he smashed into it.

“Get out of there!” he shouted. Heavy battering thuds shook the door.

“Take whatever you want and go!” I yelled back. “I won't call the police, I swear!”

He fell silent. I held my breath anxiously. For a fleeting moment I thought he was gone, only for my stomach to drop when I heard the sound of the knife's blade gouging into wood. I realized with horror that he was trying to carve his way through to me.

“Please stop,” I whimpered. “This isn't even my house. The Day family hired me to stay here while they're on vacation.”

Suddenly I was struck by the strong scent of rubbing alcohol. I looked down to see clear liquid spreading beneath the door and across the bathroom tiles.

“You have ten seconds to come out,” the man said threateningly, “or I light a match.”

A dizzying wave of terror washed over me. I gripped the sink to keep from falling.

My eyes frantically searched the room for anything to defend myself with.

I felt as if I were being torn in half by an excruciating decision: accept whatever violent fate awaited me outside the door, or perish in a fiery blaze.

I flung open the door. The man raised his knife and I emptied the contents of a hairspray canister into his eyes.

He screamed in agony as I pushed past him and ran. I made it to the staircase before he grabbed me by the hair and threw me to the ground. His poisoned eyes were a furious shade of inflamed red.

“I'll kill you!” the man roared. He lifted a foot to stomp on my head, but his polluted vision slowed him and gave me enough time to deliver a swift kick to his knee. He lost his balance and stumbled backwards. By the time he realized he was falling, it was already too late; he plummeted down the stairs and landed in a bloodied, broken heap.

As I approached the man's crumpled body I noticed a small blinking light fastened to his chest. Confusion dawned on me when I realized he was wearing a camera.

I nearly jumped when his phone began vibrating in his pocket. Unknown Number.

I answered it silently. A hideous sense of shock overtook me when a familiar voice spoke into my ear.

“Is she dead yet?” Mr. Day asked excitedly. “I can't wait to see the footage.” 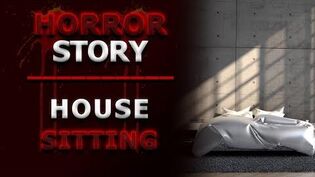 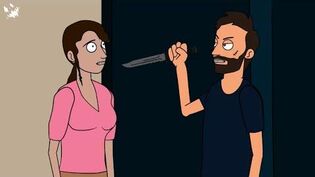 Retrieved from "https://creepypasta.fandom.com/wiki/House_Sitter?oldid=1445860"
Community content is available under CC-BY-SA unless otherwise noted.