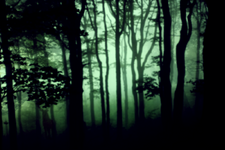 Have you been to the Poconos in the last fifteen years? Don’t. Seriously, the traffic is a nightmare. The infrastructure hasn’t kept up with the population growth and, on top of that, roughly twenty-five miles of Route 80 runs through the area. Every time someone on the interstate fucks up, all the vehicles spill out onto the local roads and traffic snarls for hours.

Which is why, not long after getting my driver’s license and my first car, I started exploring backroads. Even back then the traffic situation was an unholy mess, so I was eager to learn as many alternate routes as possible. Sometimes after work I’d pick an area and drive around for awhile, just to see where different streets would take me. Occasionally I’d study maps, too, but I really enjoyed the freedom that came with exploration.

Only a few minutes from my house was a road called Hypsie Gap. It didn’t really look like it went anywhere, so I ignored it for months. Then one day, miles north, I came across another sign for Hypsie Gap Road. I was a little dubious — it was so far from the one near my house, but it wasn’t exactly a common name either. Later I checked a map and sure enough, it was the same road. Part of it ran through state game lands, which explained why it looked like it went nowhere. Excited by the possibility of a new backroad so close to home, I decided to scope it out the next afternoon.

Things started out well enough. There were a few homes along the first half mile or so, but then the houses gave way to trees and the macadam abruptly narrowed to a single lane of dirt and rocks. Okay, so it would be a bumpy ride, but that hardly fazed me. Half of the paved roads in the Poconos were like riding a pogo stick through a quarry anyway. Who cared if the terrain was a little rough?

For awhile I drove and admired the scenery. It was really quite peaceful back there, all wooded and green and quiet. I had to drive slowly because of the uneven road, but it still beat sitting in traffic.

Then the road began to climb up a hill, which soon became more of a mountain (if you’ve never been in the Appalachian Mountains, it’s not like the Rockies — these are softer, rounder mountains, but they can still get pretty steep). The ground to my right pulled away and soon I was driving on a narrow ledge cut into the mountain. The road went from rough to rutted and I began to question the wisdom of this little jaunt. Some of the ruts were deep and I could easily imagine my car getting stuck. That was enough to convince me I should turn around, but now I had a new problem — there was no place I could turn.

I pressed on slowly, carefully, telling myself that the ground would have to level out eventually. But instead I was just climbing higher while the terrain grew steeper and the ruts jolted my car more violently. Finally I came to a stop, put the car in park and climbed out to assess the situation.

I stood there for a few minutes and realized that I really was in the middle of nowhere. There were no signs of human activity, not even any garbage tossed down the embankment. The air smelled like pine and loam and decaying leaves, and for the first time in years I couldn’t hear even a murmur of traffic. I was well and truly alone, which I wouldn’t normally mind, but I didn’t like the idea of getting stranded that way. Checking my phone, I saw I had no reception either, which did nothing to calm my fraying nerves. I’d just have to keep going.

I walked a few yards up the road, curious if conditions got any better ahead or if the mountain might start sloping back down soon. I didn’t get very far before an unpleasant tingling sensation began to itch across my skin.

Have you ever stood under powerlines? I don’t mean the ones that web through your neighborhood or rise and fall along country roads — I mean industrial lines, the heavy-duty kind that stretch between massive steel pylons, with dozens of glass insulators gleaming turquoise in the sun. You can hear the crackle of electricity overhead, like a huge sweater full of static, and you can feel it, too. There’s this throb in the air, a thrum that gets into your skin and your blood and dances along your nerves.

As I stood in the road, that feeling crept over me. I looked up but of course there weren’t any powerlines — I was in the middle of the woods, the middle of nowhere, and on a mountain to boot. But that sensation of energy in the air was undeniable. I creased my brow and strained my ears and that’s when I heard it:

Nothing. No birds. No animals. I watched the wind flirt with the trees and never heard the rustle of leaves. My nape prickled; ice water trickled into my stomach. I looked down at my chest, rising and falling rapidly now, and I realized I couldn’t even hear the sound of my own breathing.

I was almost afraid to get into my car. What if the door didn’t make any noise either? But that sensation was growing, mounting, expanding, and my skin felt like it might split if I stood there any longer. I bolted back, threw myself behind the wheel, and slammed the door — which, to my relief, I did hear. I swear it sounded flat, though, like there wasn’t enough air to carry the vibration properly.

I twisted the key in the ignition and the engine started right up. Praise the baby Jesus, praise Buddha, praise Henry Ford. I’d made up my mind to push onward, just to get the fuck away from here — I mean, I knew this road let out eventually. I’d seen it on the damn map, I’d seen the end of it myself. I yanked the car into gear and hit the gas, only to slam on the brakes a second later. I literally kissed the steering wheel and that evening I’d realize my lip was swollen and gritty with dry blood, although at the time I was too panicked to even feel it. Something had just appeared in the middle of the road, maybe thirty yards from my car. Something large, something muscular, something with antlers —

A deer. A buck, walking slowly up the road.

I started to laugh at myself. What an ass I was, sitting in the middle of the woods, spooked by quiet (already I was convincing myself it wasn’t silence but just unaccustomed quiet, because surely it couldn’t be anything else) and a damn deer. It was one big-ass buck, but this was the Poconos, for pity’s sake. You’ve practically got to elbow deer out of the way just to walk through your own backyard. My hand moved to the middle of the steering wheel, ready to poke the horn, when the laughter died on my lips.

The antlers were atypical, or asymmetrical, which is rare but not exactly unheard of (although I had never seen a case this bad and I hope I never will again). The points stuck out at crazy angles, some of them up, some of them out, some of them branching down toward the ground. One main beam looked fairly normal, while the other was as thick around as my bicep. Uneven velvet, black and patchy, clung to the antlers like blight to a tree, and stringy gray webs stretched between the larger points.

But the real problem was the legs. As the buck approached, I realized they were jointed all wrong — the knees bending backward with every step. The cloven hooves didn’t end in the usual dainty toes, but instead turned upward into strange, blunt claws. For a few desperate seconds I thought it must be my brain playing a trick on me, like when you glance at a window and the smudges on the glass become a hellish face, but each awful step closer only confirmed the reality of what I saw.

As this impossible animal neared the car, that silence enveloped me again. The grumble of the engine didn’t sputter, didn’t choke — it just stopped. For one horrible, infinite, bottomless moment I knew I was screwed. My chest expanded and contracted soundlessly, and my hands shook as they tightened around the steering wheel. Then I realized the trembling in my fingers wasn’t just my fear but those four cylinders still firing away. Even though I couldn’t hear the engine, I could still feel it.

I immediately grabbed the gearshift again and jammed it into reverse. One hand on the wheel and my neck craned toward the rear windshield, I gunned it. The car slammed over the rutted ground and to this day, I don’t know how I kept it on that scarred and narrow road. Adrenaline is a hell of a thing. I tore ass backwards all the way down that mountain, branches scratching at the paint and rocks shuddering the frame, until the terrain leveled out and I could turn around in the first tiny clearing I saw. I scraped the bumper and damn near took off my passenger mirror in the process, but I didn’t care. I just wanted to put as much distance between myself and that abomination as possible. By the time I reached the pavement and the houses I was ready to happily sit in traffic everyday for the rest of my life.

Although I’ve never gone back, over the years I’ve heard news of Hypsie Gap Road and it’s never good: a young man found murdered, his killer unknown to this day. Another homicide victim discovered dead in the road a few years later. Then two years ago the skull of a man turned up back there, sixteen months after he’d been reported missing. The cause of death still hasn’t been determined in that one, as far as I know.

I do know this much: there’s something wrong with that place, and whether the deer and the silence are part of the sickness or merely symptoms, it hardly matters. Who can guess what other bones wait beneath the carpet of dead leaves? What other monsters might tread those quiet woods?

So do yourself a favor. Stay out of the Poconos. And if you do get caught in traffic here, make damn sure you’re careful about your shortcuts.

Written by Ravenrook
Content is available under CC BY-SA