When I was about 11, I lived in this small town called Laiville. You've probably never seen or heard of it, but if you have, chances are it was negative news. See, the town was known for its "different" ways of doing things. I never really noticed it until I became older.

I was just born into it, I suppose. But anyway, I loved Laiville. I had met my first true love Mary there, I got to visit my favorite carnival each summer, and was an honor roll student for the first time in life. I was doing so well in Laiville until my mother passed on. My father was thought to be the murderer, so he was placed on trial. 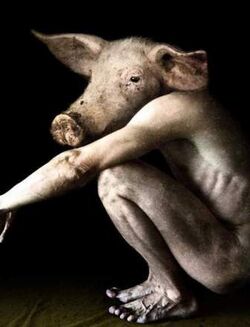 He was found guilty, but I knew he hadn't done it. Seeing him go was one of the hardest times in my life. I was able to live in Mary's home, because her parents and my parents were such great friends.

While there, things were going great. I had the usual nightmares of what had really happened, but it never really fazed me.

I felt sometimes that the situation was better there than it'd ever be with my father if he was ever let out of jail. The only thing that had thrown me off was how one night I had heard a noise in the kitchen, but I went back to sleep.

I had a very real nightmare of a... of a carnival, I believe it was. Two years had passed and Mary and I were both 13, when her mother told us news.

"Mary! Guess what's coming to town?" She had no idea.

"What Mother? What's coming back Mom?" You could tell in her voice she didn't care at all.

Her mother informed her that the Corlene Brothers Carnival. Hearing about a carnival had somewhat startled me, but I thought nothing much of the nightmare I had had two years before. Mary's attitude immediately changed when she heard those words come together. She was fully positive. She was quickly asking her mother and father if her and I could go. I told her I didn't really care, and her mother said she'd take us.

The only person with a problem in the household was her father, who warned her mother about how that one carnival had been appearing in the news. Multiple accounts of missing children, bodies being found near the premises, and animals acting very suspicious around the area were not helping sway her father to letting her go. Her mother surprisingly convinced him very easily, and we were on our way there in no time.

When we arrived, Mary's mother dropped us off with $80. Mary and I were very surprised by how much she had given us. She told us to have fun, and drove back home. The carnival was full of teens, and adults. There was loud music playing out in the distance, and the smell in the air was that of fried up foods, with a faint sewage undertone.

The first thing that seemed out of the ordinary was the entrance. There was a sign with moveable letters that was obviously supposed to spell out: Welcome Here, All! But... these letters were moved... and it spelled out something that automatically unsettled Mary. It spelled out: He'll Come Here. We both spent the whole night wondering who "He" was.

My theories were making Mary very nervous, and I decided to leave it alone for the rest of the time. We walked around the carnival for about an hour, and we were beginning to get hungry. We saw a corn dog vendor and walked over to enjoy a quick meal. Suddenly, Mary saw something out of the corner of her eye. At first it seemed like a haunted house, but as we walked closer, it was revealed to be an Airsoft Gun Arena.

Mary was psyched to see something like that at a local carnival, and rushed towards the entrance. She looked back at me and smiled. If only I had... If only... But, I walked towards the entrance also. We were greeted by a tall, skinny, carny with a face full of acne. He told us to hurry and shut up. He gave us the rules, handed us some light vests and our guns and showed us and a group of about four teens inside.

When inside, I heard a few switches go off and the lights came on. It started off calm in the arena, with Mary obviously in the lead by four kills. I was being beaten, but was also having the time of my life. Mary was running in front of me, and the lights had shut off. The shriek Mary let out was unexplainable. It was somewhere in between complete shock, and complete horror.

I could hear something small and quick scraping its tiny nails against the floor. Whatever it was it was scurrying very quickly, and I heard the others screaming and running. There was a foul smell in the air, and Mary was lying on her side. I quickly rushed towards her and tried to comfort her. She told me some short running creature had slashed at her ankles. I had then begun to be frightened. I heard the scurrying, and turn and shot about six bullets wildly.

I heard a painful screech and could hear the others shouting that I had gotten whatever it was. I heard a small object slump over, and a slight hissing sound. The lights returned, and over the intercom a voice said: "Everyone please approach the exit. Please remain calm. The situation has been taken control of, and you are free to leave." Everyone started shuffling out, telling stories of what they saw and heard, while I helped Mary back on her feet.

I went back to whatever it was lying on the floor, and saw a little creature, with horns poking from the top of his head. He had horrifyingly long nails, that were thin, yet sharp. His whole body was this sort of gray color, and his mouth was full of canines. Full of them. FULL. I poked at him to see if he were still alive, and he coughed up blood, and spoke his final words.

She was shocked, and we ran out. We were greeted by her mother, who was conveniently there right on time. The same carnie yelled out at us, "See you next time!", with a very menacing smile. We left, and never spoke of the place again.

As I write this, I am driving to Laiville for no particular reason, I just have to visit the Corlene Brothers Carnival. One last time...

Retrieved from "https://creepypasta.fandom.com/wiki/Indoor_Hunting?oldid=1367216"
Community content is available under CC-BY-SA unless otherwise noted.