"...Thy family hath been cursed. I shan't go on living in this gate to Hell. Surely, the novel town of Salem shall be damned to the burning resting place of Satan himself. Thy family hath been cursed. Thy town of Salem have been shamed by God. The monster approached from the rear, grasping itself around thy seed of hope. She be dead now. I live for nothing now. Thou art not forgiven, mysterious entity of death. Thou shal-..."

"It's been a couple something twenty years since we won our independence from those damned regulars. Our town's finally safe again. There should no longer be anymore ruckus for a while. It's been a peaceful day as of now. My slave was getting me a barrel of tea from the store, but I suspect she must have run away once more. Now I have to tell ol' Benjamin Franklin to put up some wanted signs. It's feeling strange inside my hou-..."

"Those damn yankees came from the stupid fucking Union side over to our side of the God damn base. I'm getting awful tired of this shit. They've raped our nurses and beaten our wounded. Aren't the nobel loyalists supposed to be merciful? Nay! They are just a bunch of negro-loving assholes! I hope one of those yankee fucks gets to read one of these notes!"

"That's it. Gettysburg has been lost. Here I thought our shitty army had a chance to redeem itself, as it turns out those yankee fucks have a better army than we do. That's impossible. I don't understand. We have guys like Forrest and Lee running around and we're getting our asses handed to us by a bunch of yankee hicks. What a joke, I tell ya. I'm going to spend the rest of the evening at a saloon, hopefully finding a nice bar girl to do me right. Wink, wink! Also, I'd like to mention I've been hearing weird noises outside for the pa-"

"There's a crazy fucking thing outside. It's been there for the past night and a half. I was intrigued by it's appearance. I managed to draw a picture of it. It doesn't want to kill me, but it wants to kill people. It's so strange. It looks like something from one of those big budget movies. It tells me things... Things I have learned that he will have to kill me for later. I pleaded to at least finish the painting before I depart. I'm looking at it right now as I write this last sentence; it's crying as it's claw is against my ne-"

"Hey ma. You there? That thing followed me to work this morning. This is why I hate working at the World Trade Center. Weird shit always happens to me. Well, at least I have that dinner with Jessica tonight to look forward to. Hey, call me back and let me know what's for dinner. *knocking is heard in a distant* Oh shit." 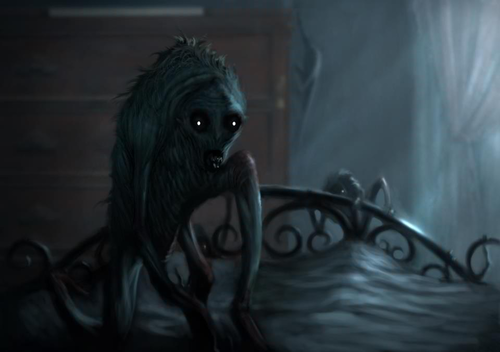 Retrieved from "https://creepypasta.fandom.com/wiki/It_Came_from_Behind?oldid=862110"
Community content is available under CC-BY-SA unless otherwise noted.