Have you ever wondered why when you are alone in a room, you never really felt "alone?" Or why children have imaginary friends who don't always seem to be imaginary? I'm sure any typical scientific explanation is floating around somewhere, but is it always the truth? A simple comforting cover up for what is actually there? I was thirteen when the visions began. I thought maybe I just wasn't getting enough sleep. Or possible stress from school. You know coming from a dysfunctional family and long hours of school add up. After the months that followed my thirteenth birthday, I began to hear voices and to be followed by things of dark nature. I never stopped to question it. That was until my next birthday. My grandmother sat me down and told me of the family lineage that would make me understand the things that I saw and heard, but never understood. A gift; if that is what you would call it. A gift that was passed on through my family that I had regrettably gotten.  She had long since passed away, leaving me alone with this curse I had received through birth.

I had always felt comfortable in my home. It was a small house of course. Two bedroom and a large master bedroom that took up the whole upper floor, but it was different at night. I was occasionally woken up in the middle of the night by the urge of having to relieve myself. You have to understand that our house was rather old, some of the door handles on our doors were no longer there, and the bathroom was no different. As I sat there, going about my business the door would slowly open until I spoke out, "I'm in here." Then it would simply stop opening. I pushed aside the experience thinking maybe it was just the air flow or something. I was young and still didn't completely grasp the concept of truth. Another incident was the tall man. I would sleep facing the wall since my bed was set up against it. And, from time to time there would be a tall shadow that would linger on my wall. I never felt threatened by it, but it was strange. He never said anything, he would just stand there while I tried to sleep.

Nothing of my visions would bother me. That was until I moved into the new house. The new house I was soon to move into was much larger than my old one. It was charming and friendly. My parents had bought it off of an old friend of theirs who was selling it because she and her husband had divorced and she was moving out to California. Before we could move in my parents remodeled it. Six months had passed and we were finally able to move into it. The first night was quiet and peaceful. My parents ordered take out since we hadn't gotten in all of our appliances yet. We were fully settled in a few weeks after our move. And, for the first time in a long time I hadn't seen or heard a thing. Maybe moving here wasn't such a bad thing. Around the time of my move I had graduated on into high school. I had always thought to myself, "What could be scarier than high school?" I never imagined I would find something worse. Months after the move I slept restlessly. The few hours I did get would leave me groggy in the morning. I was tired. I struggled to keep up with the routine I was forcing myself into. Get up, go to school, survive the day and home. Anything in between I wouldn't bother to remember. Not because it wasn't important, but because I really didn't remember.

At the age of fifteen I had gotten my first job working at a local food joint. My parents relationship had basically deteriorated after the move. Twenty years of being together and ten of them being married. They finally split and got a divorce, but they remained living together for the "sake of the family". But it didn't stop them from the arguing. Or the drinking for that matter. Niether of them had worked since we moved here so I got a job to feed the family. I worked double shifts when I could. The money wasn't much, but it was better than nothing. We were burning through what was saved up in the bank and it wouldn't last forever. Every night I would pass out in my bed for the few hours of sleep I would get. Only to be woken up a few hours into the night and not be able to fall back asleep. The feeling in the room would keep me awake. It was... unsettling. Like being watched carefully by a hunter seeking its pray. In the morning I would find what was clean and wear it, at breakfast I would try to complete my homework for school so I could pass the classes. At the same time, I was overlooking my work schedule for the week to come.

Since I had gotten my job, school had seem to drag out even more so than it once did. I would sit in class and try not to drift off. While trying to keep my head up I would stare out the window and sometimes I could have sworn I would see a man standing outside. When I turned sixteen I picked up another job just so we could keep our electricity and water on. At night I didn't bother to sleep. I would just lie in bed with my light off, listening to the sill movements through the thin walls of my room. I was used to hearing the footsteps around my house.

It didn't bother me, but what did was what was in my room its self. When I did manage to fall into sleep it wouldn't be for long. I'd be in between awake and asleep and feel this thing standing over me. I felt like if I fell asleep I wouldn't wake up. My body would jolt up and shake and I'd look around my room to find nothing here. This continued until I actually dared to fall asleep. Nightmares greeted me and torture me until I woke up.

At this point I began to tell my parents of my experiences, but they just pushed it off as "teenage drama" I had stopped telling them about it after that. But things only seem to get worse. I would wake up to the feeling of being choked or just unable to move my body period. I would run upstairs once whatever was there released me. The nights I could sleep I'd wake up in pain the next morning with scratches on my body or even bruises that looked like I had been bitten. No matter what I had said or shown them. No one seemed to believe me. I was alone on this. I was suffering and no one seemed to even notice or even care. Days I would come home from school my room wouldn't be how I left it. Things would go missing or when I tried to sleep at night things would get thrown around. I tried sleeping upstairs only to get yelled at by my parents and when I tried to explain why they would just get madder and call me a liar. One night I had finally gotten fed up with it and challenged it to show itself, if it wanted to torment me at least do it without hiding like a coward.

A few nights after things were quiet. I was worn out from a double shift I had pulled that night and I was lying in bed, facing the wall on my side. That was until I heard a soft giggle. I squeezed my eyes shut even more. Not daring to look at what stood near. At least I was until it spoke, "Good night Mommy." I turned over to see a small child standing a few feet from my bed. He was staring straight at me, a small smile on his face. He seemed out of place.. He had dark hair and was dressed in clothes you'd find in a history book. He was as solid as a normal person. Darkness seem to form around his back like he was connected to something. I glanced above him to see a large misshapen shadow. It looked like a tall male figure whose arm was stuffed into the child's back.

After I told my parents of that night, I was moved into a safer environment. I feel comfy here. Though the white walls can be a bit annoying to stare at it's quite comfy here. Sometimes I get the occasional visit and I was even given a new white jacket to wear. I think I'm going to like it here. 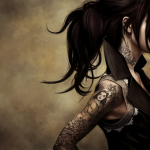 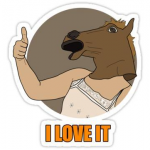 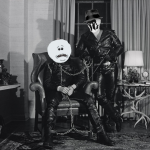