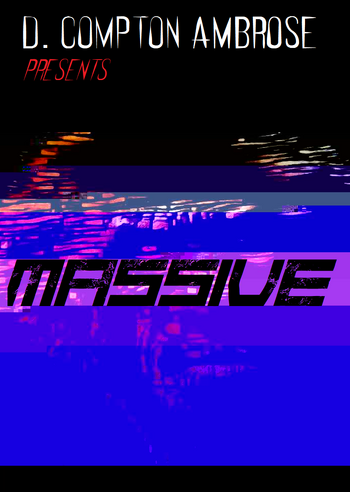 Gregory had only been working at the watchtower for one week before he encountered it. And it had been the exact thing that inspired Mark North’s world-renown “Coast-2-Ghost” in the early hours of the morning on AM 1450 and 99.3 FM everyday (except Sundays).

“Coming at you from the Mojave desert, blasting across the arid and humid lands of our planet alike into your radios faster than the speed of light,” Mark went through the rest of the introductions and triggered the opening theme just as he always did, every morning as he had done for the past thirty years since 1978.

But, when he'd gotten the call last night, he knew today was going to be anything but normal.

“This man served some time in prison for allegedly disclosing US Government classified material regarding the contents of the enigmatic ‘Area-51,’ just a few dozen miles north of our desert headquarters of Las Vegas, Nevada… Gregory, thank you for being here with us tonight,” he said.

“And thank you, God – it’s been twenty years since we last spoke, was it?”

“I believe so, Gregory, you sound…stressed,” Mark replied.

“I’ll be fine… I am happy you are well, and your show seems to be doing well.”

“It is, how would you like to begin this evening,” Mark inquired, his hand trembling over the transceiver a few minutes.

“Well, I guess I should start with my own personal struggles, my mother had just passed away and my brother was sick. I was taking a few months off from my own personal conflict to get away from it all in the woods, and if I recall correctly…”

“I was assigned to watchtower number-two,” Mark replied.

“Yes! Yeah, I… I was taking a week off in Utah where you were at the time. I had been interested in bigfoot sightings in the Northwestern United States, and there was a lot of competition.”

“Yep, I remember. A lot of egomaniacs who always wanted to ‘be the first,’ I mean, I always had more experience in the UFO community, but…”

“Yeah, everyone always wanted to be the Christopher Columbus of bigfoot, to be the first one to discover the first intact footprint or fossil or… whatever.”

“We just wanted to get away,” Mark added, reminiscing on the experience.

It was a cold spring at the tail end of winter, and Mark was in the middle of a snowstorm.

“Can’t see 100 feet outside,” Mark commented over the intercom.

“Yeah, it’ll get even worse than that before it gets better,” replied Joseph. “You get some sleep, at least three hours. I know strange sightings are reported up there all the time, but stay safe no matter what.”

“Roger, Mark North, over and out.”

Mark recharged the generator, the lights flickering momentarily at all corners of the tower.

“Joseph, you there, over,” Mark broadcasted into the great beyond.

Mark curled up with a copy of Contact, his snow-blind eyes useless save for his ear, ready for the radio to crackle to life.

The prose and sentence structure captivated Mark, drawn into the writing so much so that he almost didn’t hear the gargling voice.

But he certainly heard the crashing of a tree collapsing into the foliage.

Mark stood up with a jolt, unfamiliar with the deafening booms emanating from the forest beyond.

He noticed the radio, and darted over.

Static swarmed through his skull, past his eardrums and brain.

Mark fumbled with the controls before grasping the microphone firmly in both hands.

“Gregory and Mason, this is tower 2, where is your position – over.”

“I… I dunno,” replied a different voice. “All the lights went out, all we see are a pair in the distance,” the broken voice replied.

“Which direction are the lights coming from,” Mark inquired.

“I… I think, north-northeast… possibly more east. I dunno.”

Mason’s response perturbed him. He didn’t recall any lights to the north, so perhaps the men had gotten turned around.

Mark consulted the map, indicating their location would be roughly three miles southeast of Tower 2.

About an hour later, Mark got a call through the intercom.

“Tower 2,” he discerned them as saying such, “this is Gregory, those weren’t light… they were…”

“Say again,” Mark declared into the microphone, “What did you say? You’re breaking up.”

“Shine your flashlight, it’ll let me know where you are.”

Two beams of blueish-white light speared the foliage just a few hundred feet from the tower base.

One of these light-beams hurtled through the undergrowth, flying through the dark forest and across the tree tops before coming to a bobbing rest thousands of feet away. Mark collapsed over to the desk with the microphone on it.

“Gregory! This is Mark! Get your ass up here NOW!”

A few seconds later, Mark noticed a blueish glow emanating from the ladder outside. In just as short of a time, Mark exited the building to be greeted by a sweaty, soaked man of average build clambering up the ladder to collapse on his back on the floorboards.

Mark shook the man into consciousness. “Hey, Gregory? What happened?”

He groaned, rolling over onto one side.

The tower shook as a hulking weight slammed into the leg at the bottom.

“Ya’ll were looking for bigfoot?”

The tower shook again, and this time Mark and Gregory rushed into the crow’s nest, the former to the rope and cable.

“We need to get out of here,” said Mark. “Have you ever used one of these,” he inquired, shoving the spool of wire in Gregory’s direction.

Before the latter could elaborate further, the tower shook once more.

As they stumbled to their feet, Gregory could make out something that made his skin crawl.

“I remember that face, peering through the glass,” he said.

“Whatever it was, it had good eyesight,” replied Gregory.

Gregory had grabbed the flare gun, running around the corner and firing the burning-bright miniature solar flare in the creature’s direction.

“Yes,” he said. “The light… all I could see was what looked like…

Mark replied with the question, “Do you remember what happened next?”

“Yes, we got to the bottom of the tower…”

“We ran like Demons or Angels themselves we chasing us.”

After an hour or two almost of running… and jogging, when they got tired…

“There were lights everywhere.”

“From every direction,” Mark seemed to confirm.

“Yes,” replied Gregory. “Like someone had just turned on the Sun itself.”

“Halt, identification,” a voice shouted from the darkness.

Soldiers and police officers rushed to arrest them.

“You were in the designated quarantine-zone past hours. You’ll come with us.”

“I don’t know where they took you,” he said, “but I’m assuming they took you to a blank room, like they did me.”

“They did,” replied Mark. “They mostly just asked personal questions like my date of birth, what my address was… which they probably already knew… and then they flew me home.”

Gregory was seated in a metal chair across from a frowning detective, whose folder hit the table before his arms did. He rolled up his sleeves.

“Mason was… hauled into the air like a toy,” he’d said. “Just tossed like a child’s plaything.”

“Then what did you see,” he barked, almost as a command.

“I dunno,” Gregory had said.

“All I remember,” he began over the microphone, “between now and then, was more light… like, it had evolved some form of defense mechanism to fool its predators into thinking it was something it was not, or where it was somewhere it was not…”

“They… they informed me of my original purpose for being out in the woods that night.”

“He sat across from me,” said Gregory, “looked me dead in the eye and said…”

“You are a top-secret, beyond-classified, government super-soldier program,” he said, with heavily-armed guards surrounding him. “Your ‘psychic’ abilities… although we prefer the term ‘empathic,’” he continued, nodding to his compatriots… “Have enabled us to use you to see into the fourth dimension.”

The officer nodded, and a nearby soldier handed him a folder, which he then opened and began studying.

Gregory nodded slowly. “Y-yes. They enlisted me to find the countries-of-origin of suspected Communist spies.”

The officer nodded, “and your success rate was 99%, you were able to pinpoint the country of origin of each of these spies, yes?”

Gregory nodded, again, slowly. “Yes, we were instructed not to observe or ‘remote view’ any cryptids or urban legends. That is… what you wanted to know, yes?”

The officer huffed to himself and closed the folder.

“Seems like you were already aware of why we’d brought you here. Well then,” he said, adjusting himself in his seat. "Are you ready for your next assignment?”

“You never remote viewed the origin of bigfoot, did you?”

Gregory choked up a little, knowing he had.

“I did. But… I never went any further than that.”

“So you are aware,” the officer declared, cutting in. “That this so-called ‘bigfoot’ is a four, if not five-dimensional holographic projection produced by what we call… ‘The Anomaly,’ yes?”

The officer’s stony-faced façade slowly etched into it a grin.

“Then… you are ready for the next step.”

“So, let me get this straight,” declared Mark. “They marched you into a room – much like mine – where they proceeded to interrogate you as to what you had seen, is this correct?”

“That is correct, yes,” Gregory replied.

Gregory then proceeded to explain the hypnosis, injections and other forms of borderline-cruel human experimentation he had been subjected to.

“They put you in a state of semi-lucidity…”

“-Where I’d be just aware enough to hear them but just not-so to be able to see into the ‘astral realm,’” replied Gregory.

“I zeroed in on the beast… only able to discern its eight-foot silhouette in the darkness.”

“While you were physically-present at the military facility,” inquired Mark.

“Yes,” he said. “I astrally-projected across the mountain. Immediately after finding the yeti I was catapulted through the atmosphere, past the moon, Mars, as well as Jupiter and Saturn and their moons… beyond the Oort cloud and our local solar neighborhood.” He hesitated for a moment, and just as Mark was about to ask him to continue, he did so.

What he described next nobody else could have put into words or described in a way that made sense.

“A gigantic mirror…” he said.

“Impossibly long… and when-when I focused on it…”

He seemed to stutter for a moment and go silent.

“Gregory, are you okay,” Mark asked after another few silent seconds elapsed uncomfortably…

“My consciousness accelerated to a point I couldn’t perceive myself anymore, tumbling through space and time and other dimensions at a speed unfathomable to a human mind. I eventually came to a place I perceived in my mind inhospitable to anything we could comprehend or contain in our feeble conception of what we define as ‘life’.”

“And, did… did you… ‘communicate,’ with any form of ‘life’ that you can remember?”

“I dunno… just a brief glimpse of that world… and sensing the presence that lingered there… was the last thing I remember before my eyes started bleeding and I went blind… well, not before going into a coma for two years and prison for the next eighteen years afterward.”

“Your… eyes started… ‘Bleeding’?” Mark practically yelled this, so much so he had to catch his breath before adding, “And you’re blind now?”

But the only thing further Mark heard was a loud slam, and some scuffling in the background.

He heard a scream.

Another scream, followed by a plea for freedom.

Less than a second later, the feed cut out.

That episode of C2G was the last time anyone heard of Gregory Davis.

In all of his years covering the paranormal and conspiracy theories, Mark had never felt the urge to do so, but after this…

…Mark was going to start locking his doors and windows at night.