By the time I finally called Jay back, I ended up getting his voicemail. I tried two more times but he never answered. Eventually, I decided to simply drive over to his house.

Despite the stereotypical depiction of the computer nerd as some kind of perpetually lonely super virgin, Jay was actually happily married to a fairly attractive girl named Amy. She’s who greeted me at the door later that night, a somber smile on her face as she said, “Hey… I’m so sorry about Alice. That’s crazy. She never seemed like the flighty type.”

“I know. That’s what worries me.” Amy’s smile faltered and I immediately felt bad. My whole woe-is-me, my-girlfriend-might-be-murdered vibe had been really bumming people out all week. I quickly forced a smile of my own and asked, “Is Jay home?”

“No. He left me a note saying he would be out late doing research on something and that if you came by, I was to give you this…” She handed me a thumb-drive.

“Did he say where he was going?”

Amy shook her head, “I figured you would know. I called his office, because that’s where he always works on stuff, and the guy who answered said he hadn’t been in all day. I tried his cell but of course his phone’s off. You know how he gets when he’s working on something.”

“Yeah. I do…” I said, probably a bit too ominously as I stared down at the thumb-drive clutched in my hand.

The drive contained a video file labeled “Watch Me First” and a folder titled “Logs (FILTERED)”, which was pretty vague as far as folder names go. I had to actively resist the urge to open the folder first just to find out what the fuck “(FILTERED)” meant, so in retrospect I guess the name of the video file was a pretty smart idea on Jay’s part.

The video opened on Jay turning from his computer to look into the wireless webcam mounted on the wall of his home-office, a gesture I immediately recognized from countless TF2 scrims that we spent Skype-chatting with each other on our laptops because we both hated wearing headsets and verbally communicating with people we couldn’t see. You might say that Jay and I’s entire friendship was built on a uniquely similar variation of Asperger’s but then you’d be kind of a dick.

Jay began, “Since you’re not answering your phone and you never check my voicemails, I figured this video would be the next best thing. Anyway, I used a list of specific keyword searches to isolate all of the pertinent data from the remaining logs. I filtered out all the sex stuff that didn’t contain a reference to the masked man. From there, you can see for yourself that it’s a pretty quick read. Once you do, call me or email me if I go into work mode and switch off my cell. I’ve got a few more things to check out but you’ll see for yourself. It’s nothing good. I’m sorry man… I’m so sorry… He’s coming…”

Jay screamed as a tall shadow flickered across the wall and then the video cut to later that evening. The man in the black mask was now sitting in Jay’s computer-chair. He seemed to be staring into the camera but I couldn’t see his eyes through the mask. He slowly tilted his head, like he was listening for something.

A moment later, the doorbell rang. I could hear Amy opening the door in her living room as I pulled out my cell and started to call her. On the computer screen, I could hear Amy say, “Hey… I’m so sorry about Alice. That’s crazy…”

And then the masked man came and I turned off the video and retrieved the handgun that was under my bed. I left it unloaded and still in its case as I placed it in the trunk of my car and then raced over to Jay’s house, because somehow I still had the presence of mind to realize that if a cop was going to pull me over for speeding, the last thing I needed at this point was a gun charge.

Ten minutes later, I was parked half a block from Jay’s house and loading the forty-five caliber colt. It was at this point that I realized just how ridiculous I must look. I thought about calling the cops and trying to figure out how to explain everything to them without including the more nutty bits, when finally I decided to try Amy’s number one more time. To my surprise, I got an answer on the first ring.

“What are you waiting for, Fraidy-Cat?” His voice wasn’t what I would’ve expected. It was kind of nasally and surprisingly human. “I thought you were the big man with the gun.”

“You’re goddamn right I am!” I said, holding up my gun and then quickly lowering it as I realized how stupid that was. “Where is Alice?”

All of the lights were off except for a single lamp which backlit the very distinct figure standing at Jay’s living-room window. The masked man leaned close to the glass and said, “The same place as your balls, apparently. Seriously, dude, grow a pair. Move on. This one digs my ride more now.”

“Are you fucking INSANE?” And the stupidest question ever goes to…

“I am many things. What the wolves howl about, the cold night wind on the back of your neck. I am the darkness that fills a room when the lights are turned out. I am the shadow that stains your mind forever. The thing that cannot be unseen. I am doom and my favorite food is girlfriends.”

“That’s fascinating,” I said, cocking my gun. “I notice you didn’t mention bullet-proof.”

From the spot in Jay’s garden that I had managed to crawl to during the masked man’s diatribe, I sprang up and quickly fired two shots through the living-room window. They both hit their target, one stomach and one shoulder, and the man went sprawling onto his back. Holy shit, that worked!

I couldn’t resist letting out a triumphant “HA!” as I rounded the house and plowed through the open front door. I kneeled on the man as I tore his mask off to reveal…

Jay, trying to cough blood through a piece of poorly secured duct-tape.

See, kids? This is why violence never solves anything: You shoot someone because you think they’re a monster but it’s really your best friend who the monster was using as a decoy and now you’re on the run from the cops because you shot your friend with a gun registered in your name and that just sucks.

This segment won’t contain any transcripts of Enid’s logs and, for that, I apologize. I realize, by this point, a more fitting name for the series might be “Memoirs of Some Guy Who Read a Cam-Girl’s Diary and Proceeded to Make Increasingly Poor Decisions” but A.) that’s kind of a wordy title and B.) I’ve got bigger fish to fry at the moment so back off.

I’m far enough away now that it felt safe to stop for a night and finally go over Jay’s condensed version of Enid’s logs. I will provide a copy of the filtered logs as soon as I can.

Oh, and I almost forgot: Of course, the video on that thumb-drive would only show a black screen after the first time I watched it but I WAS able to grab a screenshot from the initial play-through of the masked man seated in Jay’s chair. Maybe I’m just going crazy (and I’m sure that wouldn’t be too hard to believe), but I swear to God it looks like the mask is smiling in this one. 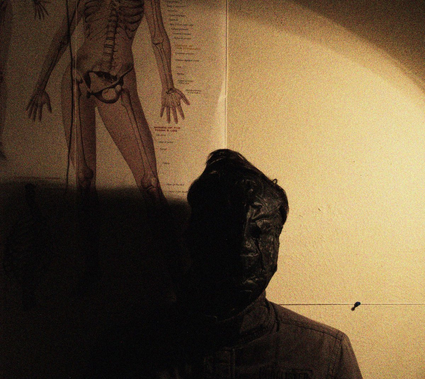 Written by DrVenkman
Content is available under CC BY-SA

Retrieved from "https://creepypasta.fandom.com/wiki/Memoirs_of_a_Cam-Girl_-_PART_2:_This_Rabbit_Hole_Is_a_Sarlacc_Pit?oldid=1308534"
Community content is available under CC-BY-SA unless otherwise noted.