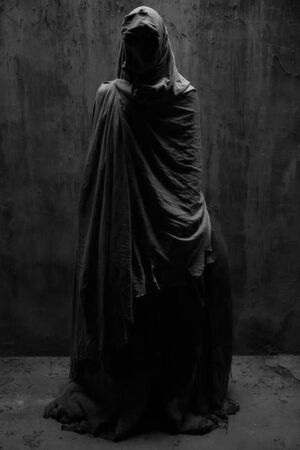 From the recesses between the waking and slumbering world comes Morpheus, the Scholar of the Supreme Sorceress of Time, Mgorr. Morpheus guards the gates to both worlds and knows all. Morpheus knows man's personal fears and faults and delights himself in renting nightmares onto the unconscious. He was spawned from fission by the dreaded Mgorr and is sought after for his knowledge.

Woe to those who seek his leadership for a great price befalls on many. Cults assemble to inquire Morpheus of his wisdom or for riches unimaginable. A group of 4 flocked together in the darkest of nights in the woods underneath the thick thrushes of the trees. The pentagram was already sketched on the ground with candles arranged by each point. The sacrifice, a young woman, was tossed into the center. Her pleas ascended towards the night skies. The knife was thrust deep within her abdomen, past her sternum. Her beating organ was extracted from the wound in grisly fashion. He threw her beating heart into the flames with the steam rising out of it.

A hooded figure in a cloak appeared before the cult when the heart was completely engulfed. His face was veiled by the hood of his cloak, his fingers were skeletally thin and laced with sharp claws. He towered over the cult members. The leader approached him and bowed before him.

"We, your faithful servants, have called you out of the crevices to ask you to bestow us with your wisdom."

The cloaked figure wrapped his long fingers around the cult leader's head. An orange light flowed from his fingers entering the cult leader's mind. The cult leader's eyes glowed that same orange dent and the nerves underneath his skin began pulsating. He began to froth at the mouth before collapsing on the ground in spasms. The rest of the cult reacted in horror from seeing their leader contort on the ground until his body melted away into a purple sludge.

"The knowledge I share was never meant for you. I have witnessed the rise and fall of empires. Kings and queens had their reigns but now are just wrinkles in time that had since passed through my gate. I will leave you with this: there will come a time when the moon and stars are stained in red and the sun will no longer shine. Chaos will become the norm, and you humans will be led to your own destruction. Out of the madness shall come, my mother, Mgorr. Her arrival is imminent and even if you deter her with your magic, she will nevertheless come. Time itself would wither away into a crumpled heap."

Retrieved from "https://creepypasta.fandom.com/wiki/Morpheus_the_Wise?oldid=1418593"
Community content is available under CC-BY-SA unless otherwise noted.