So anyone who's been on the /v/ board at 4chan probably knows about Mr. Bone's Wild Ride. For those who don't, it was a ride someone made for Roller Coaster Tycoon. It was one of those really slow motor car rides but with a twist. It had 30,696 feet of track and a ride time of 70 real time minutes, around four years in game time. In addition there were those props of the skeleton holding out his top hat scattered around here and there, as if to mock the customers. Needless to say, there were a lot of passengers screaming "I WANT TO GET OFF MR. BONES' WILD RIDE!"

Now here's where things get really good. Once the ride came to a stop, the passengers found themselves on a long path that took about two hours to traverse. Once they reached the end, they found themselves facing a sign that read "Mr. Bones says: The ride never ends!"

The path led straight back to the entrance of Mr. Bones' Wild Ride. There was nowhere else to go. In other words, they were fucked. Needless to say this gained a lot of popularity on /v/ and people started making their own Mr. Bones' Wild Ride. I was one of them and made a version with the ghost train ride. You know the one that's usually a huge death trap. It didn't last as long as the original but it did have a twist. Near the end it launched the cars into a small shed with a sign on the side that said "Enjoy your stay!" I killed about 20 people with that ride and laughed my ass off as they each went one by one to their graves.

Fast forward a few weeks and I was in Busch Gardens on vacation. I was wandering around trying to decide what to ride. That's when I noticed a ride that hadn't been there the last time I visited. It was weird because it had never been advertised and there was nothing on the map about it. I figured, "What the hell" and got in line.

Surprisingly the line wasn't very long. I only waited about 10 minutes to get on. It was one of those motor car rides which is kind of weird because they already had one elsewhere in the park. Why would they open up a second one? After buckling in I looked up ahead and froze. There was a giant skeleton up ahead tipping a hat to me with a sign over his head. "No..." I whispered. The sign read "Mr. Bones' Wild Ride".

I struggled with my restraints but they wouldn't come off. I begged the employee controlling the ride to help and that I had changed my mind but he ignored me. My car started moving and I screamed in terror. Up ahead the track stretched on for what seemed like forever. "I WANT TO GET OFF MR. BONES' WILD RIDE!" 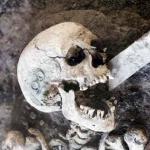 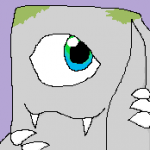