I know the topic of scary or rather disturbing stories from our childhoods are outdated and furthermore considered cliché, but I thought you might like this one. This one was from my high school years. I wasn't always rebellious, in fact, I was a good kid. I wasn't what you would call an "angel of a child", but I was still keeping up appearances, had good grades, was disciplined enough, and I had pretty well-developed manners. I hung out with this delinquent, Cody. He was an asshole, the biggest one you will ever meet. Nobody really liked him, but he was quite wealthy, and while his parents were away he would throw huge parties that half of the 10th grade students from my high school would go to.

I was always invited to these, but he always started the parties late at night, around midnight. His last party did at least, which meant my parents wouldn't let me go, so I didn't even bother asking. I know it wasn't my nature, and now that I look back it was a really stupid choice, but I decided I would sneak out. My dad stayed up till eleven every night and never emerged from his bedroom until the following morning and my mom always slept till noon, using "beauty sleep" as an excuse.

Time came, it was the night of the party, it was about eleven-thirty, and my dad had already stumbled into his bedroom and proceeded to snore loudly. I slowly twisted the handle of my door to reveal the inky blackness of the hallways. Now would be the perfect time to escape, if not now, never, he lived pretty far away, it would take at least an hour to get there by foot. I softly closed my door and lightly paced towards our sliding glass door. I opened it slowly, it must have been a minute before there was an opening big enough for me to squeeze through. Once I was through I took no risk and took another minute to close it again. I was outside, and the moon illuminated the ground quite well.

I lived in the desert area, and there were really no threats at night, save for coyotes but they rarely attack. I kept a pocket knife on me however. They were usually more scared of you than you were of them, but this was just a precaution. You can't ever be too careful out here. There's also a fair amount of shady people for such a small town, but that didn't worry me.

The terrain was rugged and difficult to navigate. I had to dodge tall brush and jump over eroded crevasses in the earth. I checked my watch, it was around 12:15 and I knew I must be close, because I saw a familiar house that I always passed by while walking on the sidewalk to get to Cody's house. Only a couple more blocks and I would have made it. The terrain had gotten surprisingly less jagged and smoother after a couple minutes. The ground was mainly free of rocks and other obstructions, save for beer bottles and some dried up bushes, but there was one thing that caught my eye.

There was a brown torn tarp, lying next to the side of the ditch I was walking through. I stopped for a moment and observed it, before my curiosity managed to claw its way through and I slowly approached it. It was probably just trash, but for some reason I felt inclined to see what it was. I nudged it with my foot, and a tall figure rose swiftly from under the cover. I was knocked back, and frozen with fear. It was a bearlike creature, that wore a dark brown trench coat and dusty brown pants. He was barefoot, and his feet were larger than any creature I know of. The bearlike creature stood up, he had to have stood higher than 6"5', towering over me. Long white hair protruded from every visible inch of body there was, almost like an animal. Its glossy eyes met mine and I was ready to run. I managed to stutter out a few words.

"Wh- " I stopped, examining the creature once more. "What are you?" The figure looked at me again and let out a loud hardy chuckle. He wiped a few tears of joy from under his eyes and gave me a smile.

"Why my boy, I am Mr. Trenchfoot.". he said, still grinning at me. His tone was nothing short of friendly and that was the only thing stopping me from making a mad dash back to my house. He gave me a puzzled look and asked, "Do you by any chance know the date?". I thought he was joking at first and I laughed a bit, then I saw his serious expression. I stuttered again but managed to collect myself.

"It's June, June 7th," I said. He looked shocked, or rather intrigued. He looked at me again and my eyes met his once more.

"My, my, I have been asleep quite long, it was November last time I was awake," he said, still sounding jovial. "Now tell me, what have I missed?" We strangely got into a conversation, and it lasted a good fifteen minutes. He asked me about politics and celebrities, but nothing too serious. We spoke for a while I looked down at my watch and noticed the time, I had about sixteen minutes to get there before it hit one. I sat up from the rock on which I previously rested.

"I have to get going," I said. Mr. Trenchfoot stood up and wiped dirt off his coat and coughed before speaking. He walked towards a storm drain that seemed to lead into blackness.

"Follow me," he said, entering it. "I need to show you something." His voice was all too friendly and inviting. He crawled farther into the pipe and soon he was enveloped in darkness. I dared not enter and stood there for a while. He turned, and the only reason I knew that is because the little bit of moon light illuminated his eyes, just as it would a dog's or a cat's. I stepped back a bit, a little frightened, and reminded him I had to go. 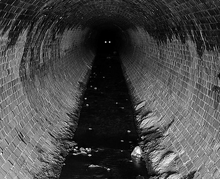 "Come here... " he said softly. He repeated, and each time he got more angered and menacing. "Come here. Come here! Come here!" He inched forward, just enough so I could see him fully. Long black claws protruded from his fingers. He clawed the sides as he repeated, "Come here, now. Come here, now!" I ran as fast as I could back up the ditch I was walking in, daring not to look back to see if he was following until I was at a safe distance. After about a minute of running I looked back, and was relieved, he did not follow. He stood, watching, as the moon outlined his figure.

I continued to run as fast as I think I've ever run. I hopped over my fence, this time not cautious of not making any noise and I ran inside, tired and frightened. My dad heard my entrance and ran to see what the cause of the noise was. I explained something had tried to attack me and he called the police without hesitation. I explained to the police where it happened and what I saw.

They took no time to rush to the area and investigate, no sign of Mr. Trenchfoot. I was at the scene watching them at a safe distance with my mom and dad. I had shown the chief the drain pipe that Mr. Trenchfoot had tried to lure me in. He took no time to motion several armed men inside. They didn't find him though, and they still haven't to this day.

That was my story, creepy right? Things have been the same, I got grounded for a couple weeks, but they let me off because they were glad I was safe. So you could say this had a happy ending, I guess for me at least. I still haven't told you the best part, you know how I said they didn't find him? Well when they kicked open a grate they entered a concrete room, no bigger than a walk-in closet. Again they didn't find Mr. Trenchfoot in there. However they did find something.

They found Mr. Trenchfoot's tarp in there, still dusty as ever. There was no sign of Mr. Trenchfoot, or any life for that matter. There was another thing in the room. In the far corner of the dark, cold, concrete shelter was a pile of bloody, torn, clothes, all of them belonging to children in my town that went missing in the last 20 years.

Written by MacaroniArtZombeh
Content is available under CC BY-SA

Retrieved from "https://creepypasta.fandom.com/wiki/Mr._Trenchfoot?oldid=1411894"
Community content is available under CC-BY-SA unless otherwise noted.