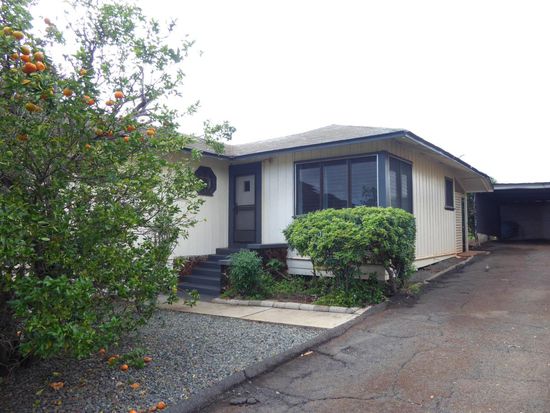 Some people try to recapture the golden moments of their childhood. I have spent decades trying to forget mine.

When I was growing up, we lived in a small house near Diamond Head in Honolulu. My father was an assistant professor at the University of Hawaii. Mutti, as she insisted we call her, was a stay at home housewife.

My sister and I had been born on the mainland but had no memories of it. We had moved to Hawaii before it became a state. We settled in Kaimuki. It was a working-class neighborhood that except for our family was all Japanese. From Kindergarten to second grade I had been the punching bag of everybody who wanted to wanted revenge for losing World War II. I was still the only blonde haired, blue eyed kid in Kaimuki Intermediate. We weren't rich, but Hawaii was home for my sister Marlene and me.

When I was young, I had trusted and believed everything that Mutti said. What child didn’t? As I grew up, I learned that what she said was often not true. I remember in fourth grade when Mutti first told me that Mr. Tanigawa next door was tapping our phone lines. I used to watch him feeding his chickens. The more I watched him, the more he looked like an old man that spoke broken English and only wanted to feed his chickens. I remember when she started to say that the family on the other side was throwing dead rats and dead cats in our yard. But I was the one who played out there, and I never found any. By the time I was in sixth grade I had learned something far more frightening. Mutti never lied to me. She sincerely believed everything she told us, no matter how bizarre it was.

We all knew Mutti was miserable. She said she was just unhappy about her weight, so she went to lots of different doctors to get enough diet pills. I could read the labels on her pill bottles, but back then I didn’t know what Valium, Phenobarbital, Tofranil, and dextroamphetamine were. She would lie on the couch most of the day. We all tried to help keep the house so she could rest. Dad and I did the marketing and the cooking, the bathroom, and the yard work. Marlene, my sister, did the housework. Fortunately, it was a small house, with just two bedrooms and one bathroom.

At dinner on Good Friday in 1967, Dad announced “I have arranged for three interviews in California. I’ll be flying out on the third of June and coming back on the fifteenth.” I didn’t want to move. This house was our home. Honolulu was our home. I looked at Marlene. She felt the same way.

“The move will be good for the family,” he said.

We pleaded with him. We begged him not to take us away from everyone and everything we had ever known. Dad wouldn’t budge. We knew that he thought Mutti was going Rock Happy. That’s when a Haole, a Caucasian, began to go mentals because they thought the island was too small or something. He thought everything would be fine if we moved back to the mainland. We both knew better.

Things got much worse right after Dad flew out. It was the first day of Summer School. It was horrible enough to be stuck with math when everyone else was swimming or surfing. But when I walked home from school to the front yard, I saw pieces of our books. The crucifixes from the house lay around in pieces. Every family photograph had been torn up. The beads from our rosaries were scattered. My cassock and surplice were in shreds.

We were both used to Mutti destroying everything we owned whenever we did anything that displeased her. But I hadn’t done anything. I had gone to school and had come back. Why did she destroy both of our things? Why the crucifixes? Why the pictures of the Saints? What had they done?

Mutti was sitting on the couch with Fang, her cat. Fang was a massive Siamese, and he was the meanest cat I have ever known. If you got near him, he would take a slice out of you, and the harder you tried to get away the more of you would be left behind. Everyone who ever met the cat hated him, except my mother. Mutti petted Fang and stared at the old Zenith table radio in the living room. It was playing the news. I don’t think she even noticed me come in.

I sat down at the kitchen table, as far as I could from her in the tiny house. I was afraid of being hit. You never knew what would set her off. “Mutti, what happened?”

“Israel was attacked. The Arabs are wiping it off the map. I must make a sacrifice to save it.”

Had Israel been invaded? It didn't matter. Mutti believed it, and that made it real to us. I carefully took out my homework and started on my assignment. It seemed the safest thing to do.

Marlene was in the kitchen doing the dishes. She looked frightened. Her eyes were swollen and red. Her face was puffy. She had been crying. Her Babusya had given her that rosary for her first communion. Pope John had blessed it, and I knew how much she had loved her grandmother and that rosary.

Mutti carried Fang to the kitchen table and sat down next to me. My heart raced. “You know he is gone now.”

When Dad was out of the house, she never referred to him by name or as “Your Father.” It was always “He” – like a nameless enemy. I looked up at her. “Yes.”

“Now is the time to have our revenge on him.”

Marlene turned off the water in the sink. “You can’t,” she said. We looked at each other, eyes wide.

“Yes. I can kill you both. Then I will kill myself,” Mutti said. “What else can we do? He has flown back to the mainland and abandoned us. I must give a pure and freely given offering to God, like when Abraham sacrificed Isaac on Mount Moriah.”

Little balls of shit like rabbit pellets filled my britches. I couldn't help it. I knew Mutti didn’t lie and didn’t joke, at least not about things like this. She was completely serious in her intention to kill us. “But God let Isaac live.”

“But God has spoken to me. I must make a pure offering in righteousness. You both have to be willing and have faith, like Isaac. I will bind your hands and feet and plunge the knife in you. Don't worry. I will be swift and merciful.”

“Please, I don’t want to die,” Marlene said, terror in her eyes.

Mutti got up, furious. “Then you are not worthy.” She and Fang went back to the couch and the radio.

We both breathed a sigh of relief. We had dodged the big one, for the moment.

Marlene silently turned back on the dishwater and furiously scrubbed away. I was sweating hard, but I tried to stay focused on my homework. I kept seeing Mutti stabbing us to death as we slept. I looked at Marlene. I saw fear in her eyes, but the kitchen was now spotless, mopped and scrubbed. She looked tired. She deserved to be.

Marlene cautiously went into the living room. “Mutti, may I please go over to Reiko’s house?” Reiko was a girl living a few houses down. The Watanabe house had been Marlene’s refuge.

“What about the laundry?”

“All washed and hung.”

“All done. See?” Marlene pointed to the pile of neatly ironed clothes on the kitchen table.

Mutti’s brow wrinkled. “I need you to clean up the front yard.”

“I’ll do that,” I said, closing my book and standing up.

“But you need to do your homework.”

“Done a long time ago. I have just been studying.”

Suddenly, Mutti turned and focused on the radio. “This is important.” We were used to her special revelations, but they had never told her to kill before. I got some old grocery sacks for the trash out front and went to work.

“Thanks,” Marlene said as to me as she walked down the driveway to go to Reiko’s.

As I picked up the mess, I looked at the house and felt sick to my stomach. The house was made entirely of tinder-dry wood. I knew she could set the whole house on fire and us with it as a burnt offering and there was nothing I could do to prevent it. The cops wouldn’t do anything until after she killed us. All Dad ever said he would do was find a job in California. The Church wouldn't take us in. If we ran away, we would never make it off the island. The police would bring us back, and we knew what Mutti would do to us then.

Danny from school skateboarded by and shouted: “Yo maddah go Kaneohe.”

Was she going to become a patient in the state mental hospital? “Ainokea wat you tink,” I shouted back. I was mad at him for saying it. I was even angrier at myself for knowing that he was right.

I looked at the bag that held what once had been our life and our faith. It was all trash now. Then I lay down in the crabgrass to find the parts of Marlene’s rosary. As I searched, Fang made the most horrible noises I had ever heard. I hated that monster but this sounded like Satan himself was pulling that monster cat apart. Then it stopped completely.

Marlene returned a few hours later. She looked at me down on the ground. “All I am missing are two small beads and one big one from your rosary. We can put it back together again.”

“It will never be the same,” she said.

She skipped up the six little steps that led to the front door and went into the house. I kept on searching. A minute or two later, she screamed and ran out. “Oh, it’s awful! Mutti and Fang are dead.”

She burst into tears and began to hit herself in the face as she shrieked. I had to grab her hands and hold her to make her stop.

I went inside. I didn’t want to look, but I knew I had to. Fang's head was on the toilet tank. Mutti was lying in the bathtub dressed in a flowered yellow and blue Mumu that was now dyed crimson. She had slashed her wrists. Beside her on the floor was her rum bottle and her collection of pill bottles, all empty. Her dead eyes stared blankly at the wall. I fought the urge to puke and to cry. Instead, I acted like a man. I closed the door, dialed Operator on the phone and asked for the police.

What I never, ever told Marlene was that I had seen it before she came home. I went into the bathroom. Fang was already dead, and Mother was in the tub. I was going to scream, but then Mother’s eyes opened and looked at me. That day, I made the hardest decision in my life. I silently closed the door and walked back outside.

We survived, but part of my soul died. Every day I see her in that bathtub. I went to psychiatrists and took their pills. I would curl up at night with a bottle of Smirnoff vodka and AC-DC playing full blast on my headphones, but the next day I would see and feel it and scream all over again.

Written by DrBobSmith
Content is available under CC BY-SA

Retrieved from "https://creepypasta.fandom.com/wiki/Mutti_Dearest?oldid=1358211"
Community content is available under CC-BY-SA unless otherwise noted.