I was thirteen years old when I stopped trick-or-treating. The other kids weren't so eager to give up free candy, but something happened that year... something awful.

My friends, Owen, Drew and I were out trekking for candy when we came to a house that had a big bowl of it sitting on the porch. A sign above it read: Please take just one.

We joked about swiping it all, but Owen and Drew only took a few each; enough to make them feel like badass kids. I'd always been afraid to take more than one because I was intimidated by authority. Sure, it was just a sign, and it usually meant that the owner wasn't home, but I was a timid kid who always did what he was told. Owen and Drew explained how that house did the same thing every year and that people rarely saw the guy who lived there. They dared me to do what they were too chicken to, so I decided to see what it felt like to do something naughty.

We looked around to make sure no one was watching, and I poured the contents of the bowl into my bag. The three of us ran down the street laughing and shoving each other. Part of me expected someone to chase after us. In hindsight, I was right to be concerned.

At Owen's house, we dumped out and sorted all of our yummy treasures. I tried to offer him and Drew some of the contraband candy, but they refused. I remember Owen saying, "That's all you, dude," and Drew shouting, "I don't want your tainted treats!" Granted, they weren't entirely serious, but I was annoyed that they weren't sharing in the responsibility; enough to go home instead of sleeping over.

That night, I was torn from a sugar fueled dream by a hand over my mouth and a knife to my neck. The skin was rough and the blade was ice cold. It was just slightly pressing into my skin, ready to slit my throat at a moment's notice. My body went stiff. I wanted to scream, but then a gruff voice whispered, "Don't make a fucking sound." At first, I didn't realize what was happening. Were we being burglarized? Then I got my answer.

"Can't you read, you little shit? The sign said 'just one'. Just... fucking... one!" I'll never forget those words, and the sickening smell of his breath. He went on to explain how every year he would catch kids taking two or three pieces of candy, which always infuriated him. It wasn't until I took the entire bowl that he finally snapped. Why did I do something so stupid? I was terrified and humiliated at the same time.

"You like candy, you little shit?" he asked me, so I shook my head as much as I could despite his hand pressing against my face. He then removed it, still holding the knife to my neck, and proceeded to shove unwrapped candy into my mouth. I tried not to inhale but I couldn't help it. I could feel things pushing against the back of my throat as I whimpered and drooled. I started to gag, but he put his hand back over my mouth so I wouldn't cough anything up. I truly believed I was going to die, and I feared for my friends as well.

My short life flashed quickly before my eyes. All I could think in that moment was, "How could an adult hate children this much?" Everything I presumed about them was suddenly a lie. They weren't infallible and their authority wasn't always law. Fine, so I took all this guy's candy. Did I really deserve to die? As I contemplated this for the first time, expecting to suffocate to death, my father rushed into the room, grabbed my metal desk chair and beat the living daylights out of the guy. I never loved my dad so much as I did that night.

I'm an adult now, and I live alone in a nice house on a quiet street with lots of kids. Every Halloween, I leave a basket on my front stoop full of candy with a sign that reads: Take as many as you want.

Written by Umbrello
Content is available under CC BY-SA 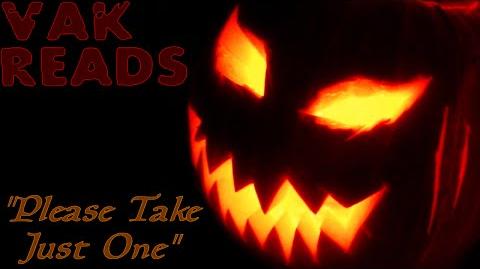 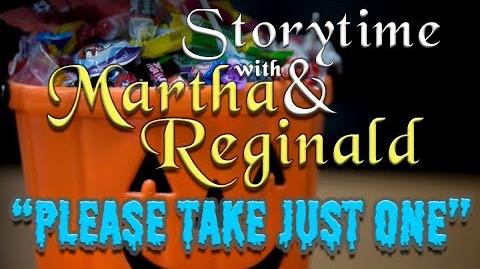 Humorous narration by author
Retrieved from "https://creepypasta.fandom.com/wiki/Please_Take_Just_One?oldid=1371803"
Community content is available under CC-BY-SA unless otherwise noted.