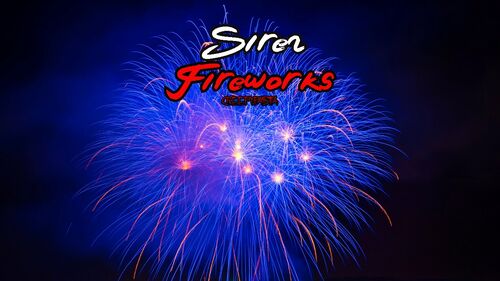 Have you ever noticed how firework shows are kind of, well, disappointingly dull?

This has been on my mind a lot recently. Fireworks have been around for centuries, and American firework shows for decades. Yet if you watch videos of the Bicentennial celebrations and compare them to current shows, you realize fireworks haven't exactly come a long way. If anything, firework shows now are probably more boring due to more stringent safety rules. I don't know, but that's the way it is for airshows so I wouldn't be surprised.

Point is: fireworks have not gotten bigger and better like everything else has. We have not, for example, figured out a way to produce cheap blue fireworks for consumer use, and I doubt many people are working on that. Only the elite shows get to have true-blue fireworks, while everyone else has to settle for a shade of off-purple or tinted grey. Nor have professional shows gotten grander. If you want to be truly wowed, you have to go to the best shows, and even they can get dull after a while. Even the big firework shows in Asia can't really compare with the spectacle of a violent lightning storm over a city, a sunset on the beach, a double rainbow, or even a full moon on a clear night. Personally, I go to lantern festivals sometimes for a change of pace.

I realize that if you aren't a firework enthusiast like me then this probably doesn't matter to you. Sure, fireworks may not have been evolving much, but it's not like people are really complaining about it.

Recently though, I was browsing a message board for firework enthusiasts and technicians and found a thread titled "Why Haven't Fireworks Gotten Better?" The thread basically expressed the same sentiments I just related above, and several people said they had been wondering the same thing.

One reply said someone in the industry had apparently thought the same thing. He mentioned Siren Fireworks, a fireworks brand about which little was known. At first I thought maybe they were called that because they sounded like a siren when they went off, but now I know that's not the case.

Siren Fireworks showed up in a rural Missouri county between 2000 and 2003. Kids got ahold of them somehow, but they were never willing to say where they got them, and to this day no one knows who made them. Kids were said to claim they were superior to all other fireworks, as in "way cooler".

Apparently Siren Fireworks made a small blip on the national news radar when it turned out lots of kids were getting injured from using them, even compared to other fireworks. And although the news never had time to mention this since it was a minor story, the especially strange thing was that none of the injuries involved burns. One girl who very nearly died while using them with friends was actually hit by a car somehow.

This piqued my interest instantly. I researched all I could find on the Web about Siren Fireworks, which wasn't much. No one seemed to own any, although some message boards had pictures of Siren Firework packaging, but little information was available beyond that.

I finally found someone who claimed to have a set and was willing to sell them for $600. I talked him down to $400 and received the package a couple days later.

Now I'm a firework enthusiast, but I don't actually collect fireworks. I know some people who do, and the issue with it (besides the obvious question of how to do it safely and legally) is the same issue with having a fine wine: do you eventually drink it, or just have it on display forever? Part of me didn't want to launch these fireworks that were apparently legendary in the enthusiast community.

Eventually I decided to though, and I got two of my friends to come with me. On July 4th, 2017, we set out to an undeveloped field to test them out.

At midnight, we launched just one rocket. The thing exploded into a mosaic of colors. It may have been the most beautiful thing I'd ever seen. Not only was there every color of the rainbow, but there were multiple shades of each. It was dazzling. I could hardly have looked away if I wanted to. The sound of the explosion was actually pretty faint to my memory, but the colors, the colors. It was like a field of wildflowers projected into the sky, or a giant splatter-paint wheel...

My friends and I came to from our, trance, if you will, when one of them fell partially into a ravine and sprained his ankle. We had already known the ravine to exist in the field, but we were dozens of yards away from it when we launched the firework. Good thing we didn't keep walking, because the ravine was something like thirty feet deep and very narrow.

I still have the other rockets. I'm not sure what to do with them.

Written by HopelessNightOwl
Content is available under CC BY-SA

Retrieved from "https://creepypasta.fandom.com/wiki/Siren_Fireworks?oldid=1402552"
Community content is available under CC-BY-SA unless otherwise noted.