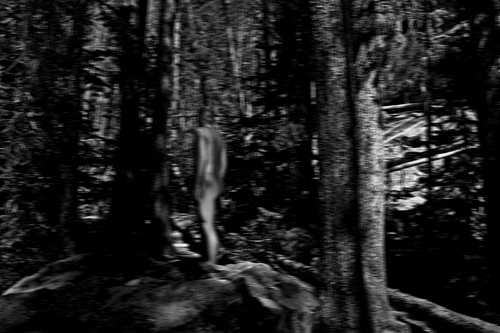 As legend goes, to become a skinwalker you must attain priesthood, and then kill a member of your own family. Then and only then can you gain the powers to shapeshift. Then, and only then, are you a true skinwalker.

According to local folklore, a man had done just that. An Indian priest had supposedly not only killed one, but five immediate members of his family. They never caught this man. He disappeared into the woods, never to be seen again.

When Jason and Alex set out for their camping trip, they knew all the old legends. And they laughed at the idea that a "skinwalker" would come get them if they trespassed on the old Indian land. The same land that the supposed murders had taken place. And why should they believe the legends? A man becoming a beast was probably the most ridiculous imaginable.

Jason and Alex were brothers. They spent their entire lives together until Jason had gotten married. Then Jason moved away, and started a family. But not Alex. Alex stayed in their hometown, tending to their parents, making an honest living off the land, and tried to be a good person.

And Alex had succeeded at this. He hadn't broken a commandment in years, and was well on his way (well, in his own mind) to heaven.

Three years had passed between their last get-together. And three more might have passed if Alex didn't insist on a camping trip. But insist he did, and there they were.

It was getting dark, and the two of them were laying out under the stars. They were deep in the woods, and they had no GPS or maps, but they knew the path back from where they were. They had gone there as kids.

"Huh?" Alex replied, he only caught bits and pieces sometimes.

"That we stayed on the old Indian land past dark. We promised him as kids, and I wouldn't want to upset him now. He's getting pretty close to dead, and if we started an argument now we may not resolve it in time for...you know. Just don't tell him or Ma. Okay?"

They both were silent for awhile, until up creeped a small raccoon.

"Well look at that," Alex called, as he pointed towards the critter.

It stared at them for several minutes. Not moving, not attempting to flee when they motioned towards it. It stayed almost perfectly still. And then finally it left.

Minutes later came a deer. Again the creature stayed and watched them. Unwavering determination glared in its eyes.

For about two hours the duo was kept awake as every animal they knew to live in the forest, and some they were almost sure didn't inhabit the area, came to gaze upon them.

The final animal was a grey wolf. It slowly moved towards them, and when it was five feet away it stopped.

The wolf slowly stood up onto its hind legs and then its limbs began to contort and pop. Horror slid over Jason and Alex's faces as they saw the fur tear open, revealing light brown flesh underneath. Finally, they gazed upon what looked like a man with a wolf head.

The skull of the wolf split open like a melon. The fur sliding off it, the bone chipping and falling like a fragile eggshell. And in its place slowly grew out the head of a man.

The man now stood before the paralyzed brothers. They couldn't seem to move.

"This is my land," said the man, with an almost supernatural smile.

"Get the fuck away from us." Jason said as fiercely as he could.

The man began to laugh. And as he continued to laugh the pitch changed. It grew deeper, from that of a man to that of a demon. And soon it sounded as if Satan himself was bellowing out at them.

The mans skin grew black as coal, and his eyes yellow like a cats. His demonic laughter echoed through the forest, as he drew closer and closer. The brothers being unarmed, they had no choice other then to flee. And that's what they did. They ran as fast as they could, except instead of out to their cars, they were cornered into running deeper into the woods.

For hours they seemed to play cat and mouse. Several times animals they passed would burst open in a grotesque manner, revealing the deranged man. But they continued to run.

Finally reaching a cabin, they ducked inside. They were filled with fear, and the brothers felt that leaving the cabin would end in their deaths.

What they found in the cabin made them regret their ignorance on legends. For in the main bedroom of the cabin was corpses. At least a hundred of them. Every animal they had seen that night was there, along with some larger bodies... some human bodies...

It was then that the man burst into the room. Except he was once more a wolf. In his deep voice he snickered out, "Welcome home!"

The following week the authorities found the Cabin during their search for Jason and Alex.

Both brothers faces looked as if they were eaten by an animal of some sort.

Six days later a security camera several states over caught Alex filling up a car with gas. Several eyewitnesses also reported seeing the dead man. And on nearly all accounts he was seen smiling a wide, toothy, unnatural grin.