Throughout my late teens I smoked weed a lot and drank a lot. I suffered from a horrid case of insomnia to boot. Staying awake all night knocked my sleep cycle out of orbit. I noticed myself becoming increasingly paranoid about everything. Something as simple as the earth floating through space - I was sure that one day (soon), an asteroid would hit us, or some lunatic would launch a nuclear war. I think the weed fueled my paranoia.

It eventually culminated with episodes of sleep paralysis. There are two types of people in this world - Those who have experienced sleep paralysis, and lucky bastards. I was not so lucky and had to endure these monstrosities for years.

For anyone not familiar with sleep paralysis, at a basic level it's where your mind is half-awake and alert, but your body is asleep. You try to move but you can't. Some people report seeing a demon sitting or pushing down on their chest making it hard to breathe. I never saw that. My hallucinations were more audible than visual. Probably because I used to sleep with one of my pillows softly over my head. It was a comfort thing. It gave me a sense of security, like hiding under your blankets.

So you're laying there in your bed. You feel like you're completely awake, but you can't move your body. The harder you try to move, the more locked you become. It's quite unsettling when it first happens, because you don't know what's going on. Then your mind starts to play tricks on you. You hear things, or see things. You're absolutely certain that it's not a dream, because it feels so genuinely real. Your mind is somewhat mixed between being in deep REM sleep where your brain can conjure up fantastic dreams, and being completely awake with all your faculties. Suffice to say, it's a very strange experience.

So as previously stated, I never saw a demon. In fact, seeing a demon might have been a relief for what I endured. I would hear whispers. Sometimes voices from people I knew, but eventually it would evolve into strange voices I had never heard before.

One minute your laying in bed, then next minute you hear whispers in your ear and you freeze. You can feel yourself tense up, like a ticking time bomb. The whispering becomes unsettling, forcing you to tense up more. It's quite difficult to explain the physical reaction it causes. The stress builds up, causing your heart-rate to sky-rocket. Ever have the type of dream where you're in a dark alleyway, and a shadowy figure is floating slowly towards you. You try to run, but either can't move, or can only run in slow motion. That's the type of sensation it is.

Anyway, these episodes happened for years. I even once heard my grandad whispering after he had passed away. It felt strangely reassuring. But the other voices would freak me out. It was difficult to make out what was being said, but it was being said very clearly and closely to my ear. I would often feel my pillow being slowly pulled off my head, and would feel the air on my ears as the whispers became stronger. It felt so real. Bizarre, but real.

The more it happened, the more I would stay awake. I dreaded falling asleep. But depriving myself of sleep would only make sleep paralysis more likely.

But one night, I distinctly remember. I was minding the house that weekend, as my family were away in Spain. I was the only person in the house, which made me on edge. I was falling asleep, but wasn't in my bed long enough to go into deep REM. I used to download audio clips of Howard Stern to listen to while I was sleeping. The banter used to keep my mind off of things, and I would slowly drift off to sleep. But this night, everything was different.

The Howard Stern clips were about 45 minutes long. I would edit them. Any shorter than 45 minutes and it would not be long enough to send me into my sleep. Anything longer and it might wake me back up if I fell asleep. But this one night in particular I was listening to Howard as I was drifting off to sleep. Suddenly, the clip ended. I could have only been listening to it for about 10 minutes at most. Maybe the media player crashed? I could still hear the hum from my computer fan. The computer had not shut down. So that must have been it. But why would it crash randomly like that when it never had before?

I attempted to sit up to see what had happened, as I was getting into the conversation and enjoying it. But then, it hit me. As I tried to get up, I was locked stiff. I couldn't budge. This was too quick for sleep paralysis to kick in. I had only been laying down for 10 minutes max. Suddenly, the whispers began. Now I was freaked out. I was sick to my stomach, as this incident felt really different. I felt a soft pull on my covers.

I had my duvet wedged in between my knees. I always slept like that, as I found it comfortable. The pull on my covers got stronger, as did the whispers. The covers eventually were pulled through my knees, and my pillow removed from above my head. Everything became cold. I could feel hands all over my body. I was frozen stiff, and couldn't do a thing.

The whispers now became spoken words. They got louder and louder, and the hands on my body became stronger and more physical. Everything felt so real. The sounds, the touch... And how could it have been sleep paralysis? I was only laying down for a max of 10 minutes. Normally it would take an hour before sleep paralysis to kick in. And the sounds, they were much more clear than before. The touching was so much stronger. Almost sexual.

After that night I never had sleep paralysis episodes again. That was the end of it, or so I thought.

About 6 or 7 years later after my last episode, I was rooting through my box of old things. I'm a bit of a nostalgic, so old toys and gadgets fascinate me. I found my old phone. It was the phone I used for college, and had taken a lot of photos with of our college parties. The photos used to be hosted on a social networking website called Bebo, but they have since taken it down so it was nice to see the old photos from college once again.

So I upload the photos onto my Facebook account, to make sure I never lost them again. I logout and log back in later. Suffice to say, the photos got lots of comments from my old classmates, who were also suffering with the nostalgia bug after seeing them. Scrolling through my Facebook notifications, I check through all the comments. I'm a Facebook addict like that. I have to see everything people say.

But one photo made me freeze on the spot. "Why is there a photo of you laying on your bed?" the comment said. I opened the photo up larger to see a photo of me, and there I was. Sleeping in my bed. The photo was grainy, as it was dark. Lit only by the light from my computer screen. But it was absolutely me in bed. And even scarier, when I checked the time-stamp of the photo - It coincided with the 2 weeks my family was away in Spain that time.

But who could have taken it? I always locked my bedroom door every night, so nobody could get in. Still to this day I have no idea who took the photo. It remains a mystery. Thankfully, I've not endured anything since. 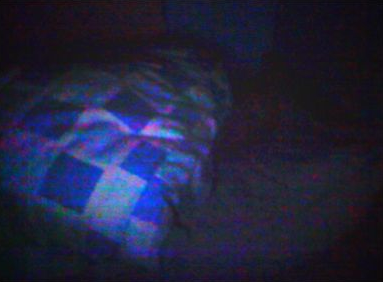 Retrieved from "https://creepypasta.fandom.com/wiki/Sleep_Paralysis_Revisited?oldid=1296460"
Community content is available under CC-BY-SA unless otherwise noted.