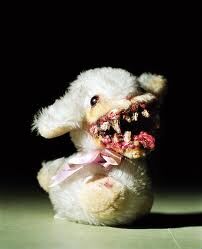 Callie McGuire put all of her stuffed animals away right before she started the seventh grade. She didn't have time for them anymore. She was too busy with other things. They were penned up in a net over her bed, piled on top of one another, like a lot of dead bodies.

From where Callie lay in her bed, though, she could still look up into the net, and that was how she noticed her old stuffed tiger looking down at her. It had a dark red ring around its mouth. That was strange, she thought. It looked like it had been eating something. Her little brother Jarrod had probably taken it down and tried to feed it some ketchup. He was always doing things like that with his own stuffed animals, but Callie didn't want him playing with her's.

No, she wasn't playing with them anymore herself, and yes, they were all penned up in a net above her bed, she had told her parents, but they were still her's, and she had fond memories of them, and well, one of these days, she might want to give them to her own children, so that was why Jarrod couldn't play with them.

Callie was just about to go tell her parents what Jarrod had done when she heard her mother scream to her father, "Bob! Call the ambulance! Something's taken a bite out of Jarrod's leg!"

Callie jumped out of her bed and ran down the hallway to her brother's room.

Her mother had wrapped part of the sheet around the lower part of Jarrod's leg, but there was still blood everywhere.

"It must have been that stupid dog of his!" her mother sobbed. "He ate part of Jarrod's leg!"

"Barney wouldn't do that, Mom! He loves Jarrod."

"Well, some animal did it, Callie, and Barney's the only animal in this house!"

The ambulance took Jarrod to the hospital. Callie's parents followed in their car.

Callie caught the bus for school.

When she returned home that afternoon, her mother met her at the door. "We had Barney put to sleep," she said. "He can't hurt Jarrod anymore."

The following Friday, Callie asked her parents if she could invite Jennifer Fortunato over to spend the night. Since the plastic surgeon had told them that afternoon that Jarrod's leg wouldn't require as much reconstructive surgery as he had previously thought and that Jarrod can be discharged out of the hospital tomorrow, they were in a good mood, and agreed to Callie's request.

Callie and Jennifer stayed up until almost two o'clock, talking, so it took Callie a while to open her eyes the next morning when she felt something dripping on her face. For just a moment, as she was waking up, she thought Jennifer was playing a joke on her, but when she finally opened her eyes, she was looking up into the face of her old stuffed lion. His mouth was dark red.

Callie felt a chill go through her.

She sat up and looked around.

Sprawled on the floor, by the side of the bed, lay Jennifer. Her throat was missing.

Later, after the ambulance had taken Jennifer's body away and the police had left, convinced that a maniac was loose in the city, Callie sat alone in her room. She was thinking about something she had once read in a book at school about what happened to pets when their owners took them out into the country and left them. They eventually turned wild, she remembered. Some ancient instinct surfaced, which helped them survive, now that they were no longer cared for by their human families. They killed in order to survive. Sometimes, they killed just for the pleasure of it. The article ended with a story about a former pet, in this case a dog, that had returned home, after being gone for over a year, and killed every member of the family that had raised it from a puppy.

Was this what was happening to her stuffed animals? Callie wondered. It didn't make any sense, though. They weren't alive! She hadn't taken out to the country and left them!

Still, for years they had received all her love and attention, and now they were penned up in a net above her bed, piled on top of one another, and forgotten.Maybe that's why they're becoming wild.

She continued to sit in her room, alone, thinking, not even realizing when darkness enveloped her.

"Are you are alright?"

"Yes. Go ahead and turn on the light, Mom. I need to ask you something."

Her mother flicked on the overhead light and came into the room. "What is it?"

"Would you mind if I got rid of all my stuffed animals?"

"Well, I guess not. Do you want to give them to Jarrod? Is that what you mean?"

"No. I want to throw them away. Maybe burn them."

Her mother just looked at her for a minute, puzzled, then said, "I guess you can do what you want to with them, Callie. They're yours. Anyway, I'm in no mood to argue with you about it now." She stood up. "I'm going to bed. I'll see you in the morning."

"Good night, Mom," Callie said. "Will you turn out my light?"

She sat for a few minutes longer in the dark, then she stood up and went to the bathroom, where she took a long, hot shower. She let the water cascade all over her body for what seemed like hours.

That was why she didn't hear the screams of her mother or her father or her little brother as their throats were being ripped out.

When Callie finished, she put on her gown, got into bed, and lay down. She didn't see her old teddy bear, blood dribbling down its chin, as it crawled toward her throat.