Some kids in todays society would enjoy an episode like that.

Maybe I'm not kid, but I would totally enjoy it with awesome face on my mouth. Yes, I'm fan of gore.

out of all of the creepypastas I have ever read, this was my first. The night I read this, i could hardly sleep without seeing those damn eyes described. This is one that makes your heart stop, your fear unending. Something so innocent taken to a whole new land. A snuff film within a cartoon edited together by a serial killer and a monster. I absolutely love this and hate it at the same time. If you ever want to read your first creepypasta, it must be this one.

the most invigorating, scary story of all. Again, I recommend this as a read\

This was one of the first pastas I read and by far the best out of the lost episodes.

This was the first ever creepypasta I read and im glad cuz I overheard the conversation mind you it was heavily edited so naturally I was curious, and Im glad I read it Cause now I love Reading Creepypasta

This is the one

Another possible picture from the tape has been found. Take a look for yourself. ArdoricActing 13:04, December 8, 2011 (UTC)

I shit myself the first time reading this. I love these lost episodes. Most of them are too predictable and unoriginal, but this one is awesome. Pretty cool, and very surprising. All of the best types of pastas (lost episodes, snuff films, demented and strange people) packed into one story. This was the first pasta I had ever read. The story is awesome, better than the videos, really. Always going to be a favorite of mine.

Okay. Let's get serious for a moment...

This was my first creepypasta. I read it in the middle of the night, and I just laid there in my bed sweating, paralyzed with fear, I swear to God I am NOT exaggerating! I went downstairs and actually slept next to my parents' bed that night!

I have to say, this being one of the first pasta's I ever read, it is certiantly the most famous. I see that a lot of people have copied off of this one. It's sad to read now because of all the cliche's people made of it. Wolves in the Basement 17:31, March 13, 2012 (UTC) Wolves in the Basement

THE EPISODE IS or rather WAS REAL

We hoped it wouldnt reach the public but I guess its too late, not that we were able to stop it anyway. The Original episode is currently destroyed. Your story however was...I regret to say...real. Nickelodeon was hoping this incident would not reach the public to avoid parents from making kids watch the show. The episode had an entirely different title I think, I can't recal it all i remember the word Blood was in it. Other then the motion picture of te blinking child the details were real. We never did find the editor who made it yet after hearing it got into the public, we lit the video on fire and it was no more. —Preceding unsigned comment added by a user.

This pasta is fake. Steven Hillenburg left the show after the movie, which was why the season had a slow start. Also, if you really were from nickelodeon and this was true, I don't think that you'd give away your company's biggest secret... TheZB17 (talk) 23:59, November 18, 2012 (UTC)

I also love how the anon claiming to be from Nickelodeon has crappy grammar and spelling.  Maybe this episode got to his sanity...?  (I'm being sarcastic by the way.  We all know it's because he's no Nickelodeon employee but just some random kid trying to creep people out, and failing due to his inability to communicate, from the back of his Remedial English classroom)EarthPhantomTS (talk) 02:15, May 23, 2013 (UTC)

Ive been reasearching i have reason to belevie there is a copy of the original i almost have it when i find it ill get it sent to proffesionals to make it HD and we can watch this shit.

Nick Studios originally hadthe episode and so they kept it a secret from the public. When news of the parody name (Original Episode tape had a different name and not officially "Squidwards Suicide" or "Red Mist") got out, The creator (Stephen Hillenburg) was outraged at the news of the leak he imediately burned theoriginal tape and footage. THE TAPE IS GONE ONLY THE YOUTUBE VIDEOS SHOW VISUALS OF WHAT MAY HAVE HAPPENED. There were no copies, no back ups (at least not to my knowedge nor would they have a reason two onless police copied it for evidence)

I found this incredibly disturbing... Especially the videos on the page... wow, good job

Man, this story gave me the chills! Really well put together, though!

Everything about this creepypasta is so disturbing, engaging, and believable. As a future animator and basically an overall Spongebob/cartoon fanatic, this pasta was so unsellting for me the first time I read it! But I loved it. This one is the best of the best.

Fake, I've seen the video and it's just mash ups of episode clips and voice samples from episodes, and as for the picture, it's just a picture of Squidward doctored up on Photoshop to make him look that way.

The Squidward's Suicide that was almost canon

Okay, dunno if you've seen this episode, but ARE YOU HAPPY NOW.

I swear to you the folks at Nick have seen this pasta and decided to make an episode based off it.

Some notable parts are when Squidward says, "Wake me when I'm dead." and when Spongebob comments how he hasn't seen Squidward in two weeks. Then we get a shot of Squidward saying how he's miserable and maybe "this" will help---AND HE THROWS A ROPE OVER A RAFTER. It was gag, of course, but I was sitting there with my jaw on the floor. Seriously, go watch it and spot the similarities.

Doesn't the beginning have the Scottish man who knocks on squidwards door and after squidward slams the door on him and knocks again, he informs squidward that 'The Red Mist is coming.'?

Response: that us fan made

It's pretty weird that so many people (including myself) were introduced to Creepypasta through this story. I literally didn't sleep the night I read this, I sat in bed and tried to read bad Spongebob fanfiction. This was the most terrifying thing I had ever read at the time (like a year ago or so).

i luv this one. i want all the pics. im so curious8I

Is there a video on here or on Youtube of Squidwards Suicide . There was one on the Red Mist article but it wouldn't let me watch it since the uploader closed his/her account . If anyone finds the video or knows of it, can you please send me the link to it ? Thanks !OliSykesLover (talk) 18:54, December 21, 2012 (UTC)

Note: I would like to make a special exception for this pasta, because this pasta did not steal those cliches- they weren't cliches back then. Therefore, I'm not including the cliches in the Originality section. I'll try to sound like a person who hasn't seen any of those cliches before. Now, let's get on with the review.

A solid plot that keeps on going, even if you tell it to stop. Not too long, not too short. Perfect.

I would have liked it better if the pasta wasn't based on a pre-existing show; it would make the pasta seem more mysterious if no one knew where the tape came from. Still, it's pretty original- I liked the part where the main characters (were they editors? Can't be bothered to check) found out that the video was edited 24 seconds before they popped it into the player.

Creepy. Descriptions are spot-on. Whatever the author wanted me to feel, I have felt.

It's kind of sad that such a good pasta can be ruined by such a closed, narrow ending. A shock ending, maybe the tape disappearing later or something, would have greatly enhanced the shock value of this pasta. Just telling me that "I'll never watch Spongebob again" and that the child was never identified (there are lots of abandoned childs out there. Plus, you always have Photoshop) isn't going to make me scared the next time I watch Spongebob. One case isn't going to do it. It would be better if the author left it open-ended, maybe with the protagonist finding out that there are millions of tapes hidden somewhere underground, and as the protagonist takes one tape and pushes it into the player, the pasta ends. That would be better because you're left to your own devices after that, and you're not left thinking if each Spongebob Squarepants episode has hidden frames. One case isn't going to buy that.

I was geniuenly scared during the middle, but all of that vanished with the simply horrible ending. Overall, a decent pasta. Not the best Lost Episode pasta, but still better than "OMG BLUD".

This is my favorite pasta only cause it's well written and leves you to guess... Who did it?

My friend has seen it. He found the complete video through what he called the deep web. He has been acting strange since then; cut of from the world. A few days ago, he began to talk to me about another video called The Grifter pleaing that there is a connection between the two. There are incidents when he wont sleep for days just researching the two videos. I am telling you to not go searching for the two videos! They crawl inside of you and alter your life. I need any info you might have on these videos. I am lost.

Scarry as hell loved this storry!

When I first read this, I cringed at the dead kids. Of course, that was when I was new to creepypastas. I think that this has to be the best SpongeBob lost episode pasta in the world.

Also, there are some things the author could DEFINITELY improve on. Grammar is the biggest, and well, maybe.... this pasta should be deleted. Why? Because, this is plagarized from 'SomeOrdiaryGamers.' You really can't tell, you can say it's a load of hogwash, but look up SomeOrdinaryGamers and search through the stuff for awhile. There's an article that says half of the stuff Squidward's Suicide does. I forgot what the article's name was, though. I'll start searching myself.

Also, the picture is VERY creepy. A found a video that resembles to Squidward's Suicide, but is different: 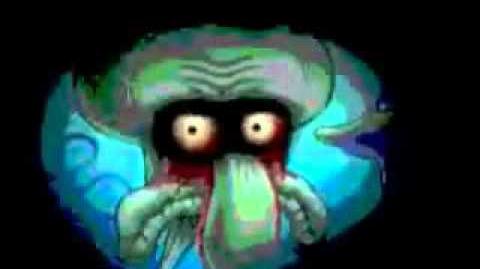