My life had recently been plagued by a persistent bought of rotten luck.

I'd been terminated from my last job, the weeks spent unemployed were slipping into months despite the stacks of applications I'd filled out, and every credit card I possessed had been maxed out to its limit. Bitterness and self-loathing had poisoned every fiber of my being and left me with an inescapable melancholy that I was starting to believe was incurable. My latest humiliation had been to dig through my wallet for spare change as a cashier fixed me with a plastered-on smile and an impatient line grew behind me, only to find that I still didn't have enough money to purchase a meager amount of groceries.

I'd headed to Woodharrow Park afterwards—a local secluded, sleepy stretch of land—to clear my head. The park was empty when I arrived, leaving me free to wander the paths alone and aimlessly. Hunger gnawed away at me like a familiar enemy I could never quite shake. In a final indignity, the previously-sunny sky suddenly began to pour rain—I, of course, was not carrying an umbrella.

I was so absorbed in my own misery that I barely felt the gentle tug on my jacket sleeve.

Looking back, I wish that I'd kept walking along the park path without so much as glancing downwards. I wish that I'd ignored the soft, silent plea for my attention. I wish that I hadn't made the horrible mistake of believing that a hand with a touch so timid and helpless was incapable of holding the power to be terrifying. But instead I foolishly stopped in my tracks, and ever since that fateful decision I have not had a single moment of peace.

I looked down to see two children standing at my side and immediately felt a jolt of unpleasant surprise. Both stood no higher than my waist, one slightly taller than the other, and both were clad in black raincoats that looked more suited for a sepia-toned photograph than a modern day child. They each wore matching wide brim hats that drooped atop their small heads and obscured most of their faces. Though I could vaguely discern that the taller of the pair was boy and the shortest a girl, I was unable to see any features above the pallid flesh of their swollen cheeks. Their lips were so colorless that it appeared as if they had little more than a thin white sliver for a mouth. The children's bodies were round without any of the cherubic softness associated with youth—rather, they looked unnaturally bulbous, bloated to the point of near grotesqueness. Unbrushed tufts of stringy blond hair jutted from beneath their hats like tangled straw, dry as a brittle bone and seemingly untouched by so much as a single drop of rain.

“Hello,” I said, forcing myself to sound upbeat.

They stared up at me in silence. The girl continued to cling to my sleeve.

“Are you okay?” I asked. By now I was drenched and eager to head back to my car. “Do you need some help?”

But the pair remained mute. I stood there awkwardly, unsure of what to do, when the girl suddenly began to grip my arm with a startling strength that made me worry she would pull me to the ground.

Alarms rang loudly throughout my brain. I felt an immediate urge to extract myself from her unsettling grasp and leave them both behind in the rain.

“Well...” I warily pulled my arm away, somewhat embarrassed for being afraid of how the pair would react. “If you don't need anything, I guess I'll be on my way.”

She released her hold on me without protest. Neither said a word as I walked away. When I turned around for a final look of parting, I saw that they were still staring at me; though I could not see their eyes, I felt their gaze follow me with an intensity that disturbed me no matter how much distance I put between us. I didn't look back again.

I picked up my pace and dug my keys out of my pocket. The rain fell as cold as ever. I unlocked my car and was thinking about the can of chicken noodle soup I had left in my sparse pantry when I noticed that the girl had left behind a stain on my sleeve, as dark as ink and shaped like her tiny fingers. I wiped at it with my thumb, but the mark didn't budge. I sighed and looked up, only to nearly stumble backwards in shock when I saw the backseat door open and the girl sitting inside.

She'd removed her hat and was holding it in her hands, both of which were clean despite the mark on my jacket, with her head bowed and her knotted hair concealing her face like a curtain.

“Hey!” I tried to keep my tone from betraying how unnerved I was and failed spectacularly. “What are you doing in here?”

She sat as wordless as before, tightly squeezing and twisting the brim of her hat with such violence that I was certain she would rip it apart.

I swallowed my uneasiness. “Look,” I said as calmly as I could manage, “if there's something wrong, I can't help you if you don't tell me what it is.” I reached into my pocket and pulled out my phone. “Maybe it's better if I call the police and you can tell them...”

My voice trailed off as I watched my phone screen flicker on and off before collapsing into a scramble of pixels and shutting down entirely. I stared agape at my reflection in the black screen as a terrible feeling of dread began to wash over me.

When I looked back up the girl was gone. In her place rested her hat.

The hat appeared soaked, every bit as saturated with rain as my own clothes were. But unlike the jacket and jeans that clung to my skin and chilled me to the bone, the hat didn't feel wet when I picked it up with a trembling hand. It was dry to the touch even as I watched beads of rain drip from its brim and onto the car's upholstery. I realized with something between fascination and horror that the rain drops left behind no traces where they landed, and when I cupped my hand beneath the hat to catch the drops in my palm I felt nothing but air. Furthermore, the backseat was completely dry—there were no damp footprints, no water spots, nothing at all to indicate that a girl wearing a coat glistening with rain had been sitting there mere seconds ago.

I turned to fling the foul thing into the parking lot and gasped out loud when I saw the boy standing only a few feet away.

“She forgot her hat,” I said dimly, my heart thundering madly in my chest. My mind screamed at me to jump into the car, to drive off as fast as I could and never come back to Woodharrow Park again. But it was that same fear that left me rooted me to the spot, paralyzed and helpless, even as the boy stepped ever closer towards me.

“Stop it!” I wanted to scream, but my tongue felt too thick to form the words.

The boy lifted his hat. A burst of darkness erupted in my eyes, blinding me as a hellish symphony assailed my other senses. I could neither see nor move as I felt insects scuttling behind my eyes and scales slithering inside of my skull. The vile taste of putrid water filled my mouth as the deathly scent of rot flooded my nostrils. Final breaths rattling in dying throats, drowning bodies thrashing in water as they sank, screams of agony so shrill that they sounded inhuman—I heard them all and many hideous more. I stood frozen in the terrifying darkness as the rain furiously slashed at my flesh like cold blades, unable to weep or let out a watery cry for help.

Suddenly, I felt someone grab hold of my hand and pull me free from the loathsome trance just as abruptly as I had been consumed by it. My vision returned and I saw that I was now alone; even the girl's hat had disappeared.

I dove into my car and sped away from Woodharrow Park. The sky grew clearer with every mile.

When I got home I peeled off my wet clothes and climbed into the shower. I sat there beneath the hot spray, immersing myself in the steam and the warmth, and jumped out the instant it turned cold. I dried off and crawled into my bed, burying myself beneath the blankets as my mind raced with the nightmare I had endured.

I wondered if the children—whoever they were—had somehow been drawn to the despair I'd felt as I walked through the park. Perhaps my hopelessness and sorrow had served as a miserable beacon, guiding them towards me and leaving me vulnerable to their presence.

There was one thing I knew for certain: it was the girl who had rescued me. I'd known it the second I felt her small hand touch mine. I realized now that she hadn't climbed into the car to frighten me—she had only wanted me to stay with her in the park. Tears slid down my cheeks as I thought of her being forced to forever wander Woodharrow with no one but a boy who carried hell beneath his hat to keep her company. Maybe she too had once visited the park while bearing a sadness as heavy as my own, only to wind up imprisoned by it.

I slept fitfully. When I awoke the following morning, I discovered that the stain on my coat sleeve had somehow bled onto my arm. I spent hours trying to wash it off, scouring my flesh until it grew angry and raw, but the mark refused to be cleansed away. I sat on the floor of my bathroom, gazed down into the imprint of the girl's fingers on my reddened skin, and felt the horrid chill of Woodharrow's rain creep down my spine.

That was last week. The mark still remains on my arm, and at night I toss and turn and vividly dream of the park.

I've told myself repeatedly that I can't go back there, that I was lucky to have made it out alive and might not be so fortunate again. But I can't stop thinking about the girl. I pity and fear her in equal measure; when it rains I look out the window and wonder if I'll see her outside waiting for me, clutching her hat and bowing her tangled head. The thought both saddens and terrifies me.

So I've made a decision, and perhaps I'll live long enough to regret this one too: as soon as I've finished posting this, I'm grabbing my car keys and driving to Woodharrow Park.

I know that I might be walking towards my own doom. I know that the marks on my arm are likely a bad omen. I know that the girl may be every bit as malevolent as the boy, and that she may be trying to lure me into a trap of her own. I know that there's a strong chance I'll never be able to come back and tell you what happened. But I can't keep reliving the same nightmare over and over again. In a way, I never truly left Woodharrow—my mind wanders its paths even as I hide away in my home.

I have a feeling it's going to rain. 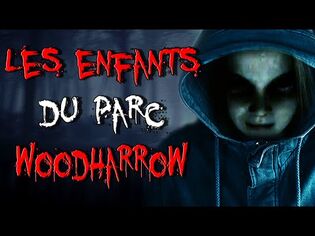 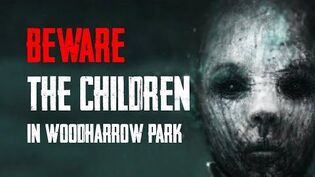 "The Children of Woodharrow Park" Creepypasta 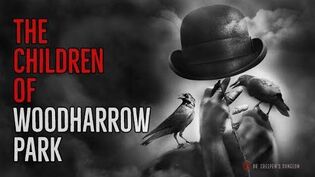 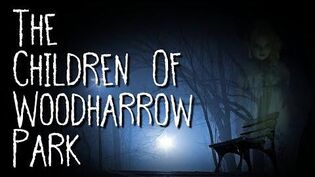 "The Children of Woodharrow Park" 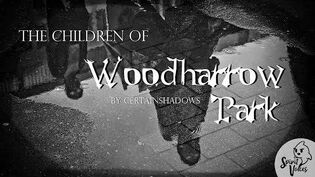 "The Children of Woodharrow Park" -- A Creepypasta Read

The Children of Woodharrow Park Told in the Rain

Retrieved from "https://creepypasta.fandom.com/wiki/The_Children_of_Woodharrow_Park?oldid=1459803"
Community content is available under CC-BY-SA unless otherwise noted.