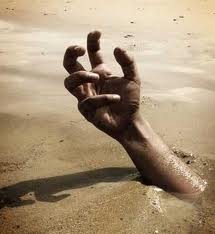 I think this might be the end, for us, anyway. You know, man and all that we've accomplished. I've had plenty of time to think about it since the last time I saw the sun — the last time I'd ever see it. It's not the end of the world, but it is for us.

I guess it started almost a month ago, but it could be longer; there's only the clocks scattered around the house to tell me how long and half of them are dead now. Anyway, I'm straying from the point. It was on the news; a cruise ship sank for no reason. It wasn't damaged, it was just pulled straight down. The rest of the stories soon flooded in. Everything in the water was sinking. Oil rigs disappeared. People on the beach were just pulled down into the abyss. Nobody seemed able to explain why this was happening. Nothing floated anymore. It was bizarre. This filled the news for a couple of days until it just got frightening.

It was during one broadcast that it changed for the worse. It was a report from some beach, an on-location report about this strange phenomenon. They were just recycling the same question we had all been asking for days. Suddenly, panic seemed to grip the face of the reporter. She screamed as the camera quickly tilted down. Her feet were sunk into the sand down to her shin. I remember smirking, thinking it was just some overly sensitive reporter messing up, but then the camera dropped. The remaining ten or so seconds that followed showed not just the reporter sinking into the sand but all of them, the whole media circus that had descended on the beach to cover the same story. The reporter who was down to her shin a minute ago was now down to her chest. The shot of writhing, screaming, sinking people ended shortly as the camera was engulfed by the sand.

The news stayed on for a few more days, but there was nothing to say. Some blamed sinkholes for what happened on the beach, while others argued against them from the safety of their downtown studio. The news was a waste of time now. It was much easier to look out the window. It was more or less a ghost town outside. Everyone was inside, afraid to leave their homes. It didn't seem to make sense. The roads and pavements were being absorbed by grass and dirt. Street signs and traffic lights were being consumed by the plants. Houses weren't exempt, either.

Some people tried to run, jumping from rooftop to rooftop, looking for higher ground. Occasionally, while flicking through what was left of the TV broadcasts, you would see skyscrapers that had become refugee camps. I had made one trip out of the house since this started, across the rooftops. It was an attempt to get supplies from a nearby supermarket, but that plan seemed to be a waste of time. The store was a husk by the time I got there. It was looted and pillaged. There was all the evidence I needed to see how bad this whole thing was. It's easy to be in denial about something like whatever this was, until it really seemed to affect you. When I got back to my house, I noticed something. My car was gone. Well, almost; you could still see the top poking out from the overgrowth and loose soil. It wasn't just my car; it was all of them. Bigger vehicles were still in sight, only partially obscured, but they were going down too.

A few days later, my whole bottom floor was subterranean. I had managed to block the windows and door from bursting in from all the dirt and soil, but it was just a cell now. A mausoleum. It wasn't somewhere I wanted to be. I spent most of my time by an upstairs window, staring at the hostile world outside.

My neighbor died yesterday. He fell off of his roof and was swallowed by the earth.

He's not the first to do that either. What made it notable was why he fell. He was trying to stop his dog from getting out. The dog's fine, or I assume so; it ran off. Animals aren't affected. This is our fate. That nihilistic little discovery was too much for me to bare. This whole thing was a living nightmare. I hit the bottle hard and passed out for the night.

When I woke up, my head pounded in darkness. I flicked the light switches and the fuses, but the power was out. I took the flashlight by the fuse box and looked around the house for supplies. While checking the upstairs, I saw it. It was the last glimpse of natural light I'll ever see. I had been thinking it was just night, that I had slept all day in an alcohol coma. By the time I could cross the room to the window, it was gone. I was underground. I tried to get out, smashing through plaster and tiles to be greeted with a stream of soil pouring out from where the sky should be. I don't know how much longer I've got in here, in my house-sized coffin. There's only so much food and air. I've got a little bit of light from a couple of candles and a book of matches. The flashlight died some time ago. But this is our fate. Humanity's fate.

Our return to the Earth.

Retrieved from "https://creepypasta.fandom.com/wiki/The_End_of_Man?oldid=1417101"
Community content is available under CC-BY-SA unless otherwise noted.