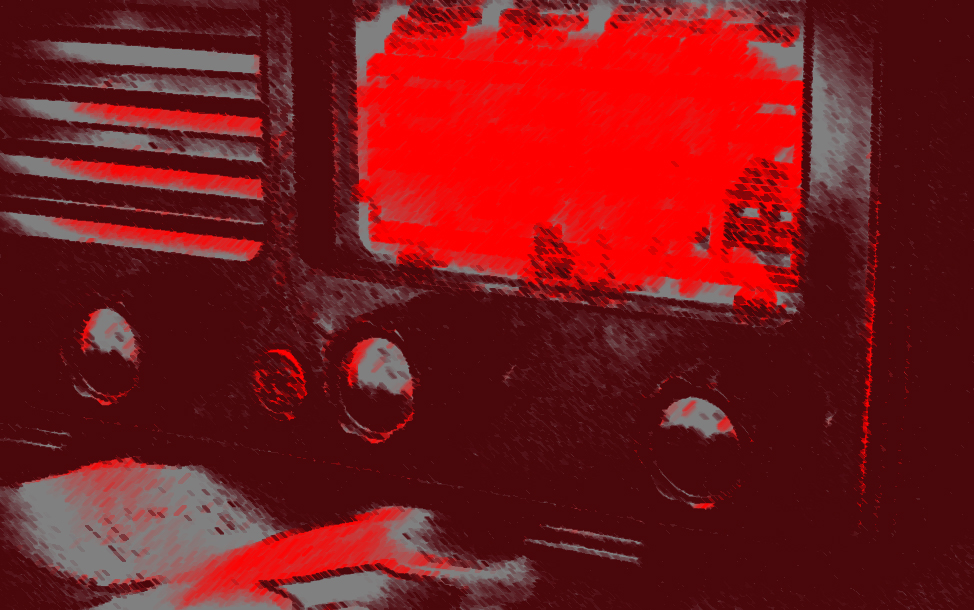 In the middle of 1995 an intriguing and bizarre event took place in my city.

Here in Brazil, even with televisions in our homes, the usual family would still have a radio to hear music stations and sometimes the news.

When we were young and had a lot of time on our hands, me and my friends used to search for pirate stations. They usually had horrible audio quality and talked about transmission related equipment or other topics like how to make illegal radio transmissions. There were some underground stations that would play heavier music but they were rare and had low-quality audio.

But, our favorite station was "The Faith Zone".

It was an evangelical broadcast that was transmitted in the evening, always at a different time. The announcer was some kind of pastor. With his angry and accusative voice, he was always ranting about how celebrities made contracts with the devil in exchange for fame and fortune. Some of our younger friends would believe him, but an older guy and I would laugh at their innocence. The guy would then play songs backwards and claim that the weird noises were sentences. He always said he could clearly hear satanic speeches in the songs, but we wouldn't understand anything. When we did, it was always something different from what he heard. We even made bets on who could guess what he was gonna hear.

Some months later we found another frequency where he started a different broadcast, where desperate people would call him for advice or help. The problems would go from a cat that disappeared (we laughed a lot at the cliché) to the extreme of a son that got shot in the face with a shotgun and was still alive. Then, with his strong and intimidating voice, the pastor would say that the unfortunate person had to accept Jesus into his life, or the devil would still have the right to do even worse things to them. Weeks later, he would start receiving calls thanking him, telling him that great miracles had happened. It was usually impossible stuff such as curing AIDS (we barely knew what that was at the time), recovering fertility (the old man used those exact words), and other strange things I cannot remember.

In the half of the next year he started exorcising people by phone. The calls were from people crying, or maybe pretending to, asking to be freed from their demons. I laughed at that because it felt more like a comedy show than something serious.

That changed one night.

We were all gathered in a friend's house, at about 8 o'clock in the evening. We turned on the radio and he was talking with a young woman who couldn't get a job. After telling her that she'd get a job if she became evangelic (from what I remember, she had a funny voice), he received a call from a young girl that was, judging by the voice, around 15 - 17 years old. Their dialogue was more or less like this if I remember correctly:

Girl: Good night father. (We thought he was going to say that the only father was in heaven.)

Pastor: What do you search for here, young one? What harms you?

Girl: There are some people talking lies about me and my family. I feel hunted.

Pastor: Accept Jesus in your life and he'll make you a miracle.

Girl: The people are gonna blame me anyway. They don't take responsibility for their actions. They always blame me for everything, and some people are encouraging that.

Pastor: The impure who do that will pay for it.

(We started to hear noises and interference on her side of the line.)

Girl: Evil will take these people to pay for their sins.

Pastor: Those who do not have God's mercy on their hearts will feel the fury of darkness' flames.

Girl: Hate can also be considered...

(The rest of the sentence was distorted. We couldn't make it out.)

Pastor: Those who use lies in self-profit will be punished.

(The interference grew stronger when he claimed punishment for the third time. We started hearing deep voices, the atmosphere was starting to grow tense amongst us.)

Girl: If that's so, all the lies you've told about everyone gives me the right to take you to your place. You sow hatred in every way, but your lies don't work like they used to. And you've begun defying me.

Her voice became lower pitched. It was not to the point of sounding like a pig, but more sinister; it was like a demon. I can't remember what she said, but after that we could hear fire followed by louder noises. We were almost sure they were voices, but we couldn't understand their speech. One of the younger kids said that we should turn it off now. We made fun of him, but, to tell the truth, even I was getting scared. The voices were making me feel heavy, as if gravity were increasing. Then we heard a loud crash, and we could hear what sounded like his muffled screams. They started getting distorted until all we could hear was the fire.

Then there was only static.

After about a month, the frequency was broadcasting again-- with a new announcer who never said a word about what had happened.

Retrieved from "https://creepypasta.fandom.com/wiki/The_Faith_Zone?oldid=757224"
Community content is available under CC-BY-SA unless otherwise noted.