The Gallery of Henri Beauchamp 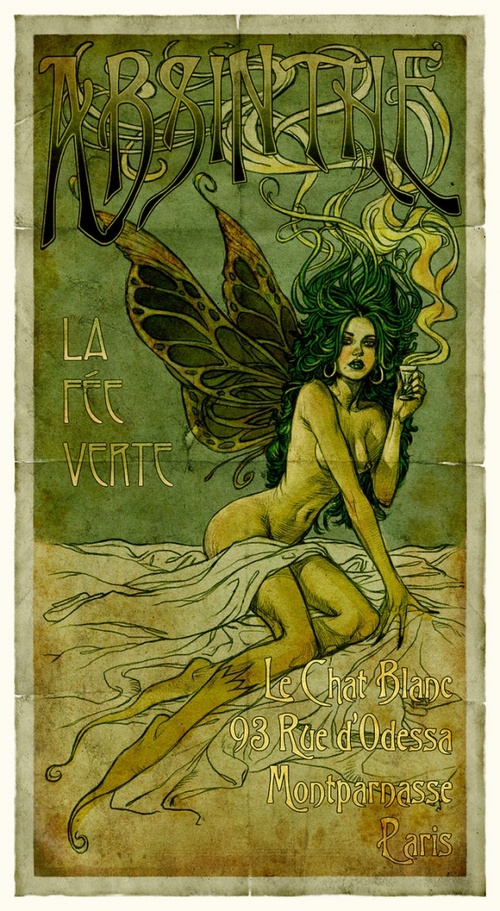 If you go into this one tiny, dingy one-story bar in Paris, and the right bartender is behind the counter that night, you might be able to see a very exclusive gallery show of the lost works of one Henri Beauchamp. But, to get in, you have to prove you're a devotee of the artist.

You'll be asked, in clear and perfect English, "What would like to partake of this glorious night?" Answer "absinthe", no matter what. Any other drink, from whiskey to water, will kill you as you sleep.

The next question will regard the type, and you MUST answer one of two things: "The stuff that Man himself could not bear to take," or, "The good stuff. The best stuff." If you ask for any other absinthe, in any other way, you will be plagued by nightmares for 13 days. Each night's dream will be more horrible than the last, until, upon the thirteenth dream, your nightmare will follow you, every moment of your waking and sleeping life.

Don't try and cheat the barkeep: the door locked behind you. You have to drink what he gives you, doom or not. That such a powerful man granted you audience should be enough. Besides, I've heard that the dying complimented his drinks in their death throes.

If you make it that far before sealing your fate, the bartender will say, "Be sure you handle this with care; this is the finest I have." From here, you may do one of two things: Say, word for word, "I overestimated my fortitude, and I bid you good eve." If the barkeep nods, you may leave the door you entered, unharmed and with nothing gained and nothing lost (except the time spent inside).

Or you can go on.

You will be given a glass with a seven-sided rim, with each side twisting ever so delicately around the basin until forming a sleek and simple handle. You will also receive a very, very, very special absinthe spoon, in the shape of a key; the holes at the key's top serve as the draining point for the alcohol to pour over the sugar cube. And, of course, an unmarked bottle, stripped long ago of its label, scraps of paper sticking to its sides, covered in the rot of the decades past.

The spoon is completely flat, but has two distinct sides: one with a groove along the shaft of the key, and one without. Turn the shaft down, so its groove will be face down. If you attempt this face up, your absinthe will taste foul, your nose will burn, and your eyes will shrivel in their sockets with unspeakable horrors not of this world.

Now, if your spoon is the right way up, begin preparing the absinthe as one would (put the sugar on the spoon, and pour the alcohol over so it gains its color and "special qualities").

Say "cheers" to your friend, the barkeep, and bottoms up. If you don't, the absinthe will burn every innard it touches with the power and pain of sulfuric acid.

If you've done it right, the already dim lights will go off, and darkness will consume the bar. Don't be afraid; the darkness is the cue that you've been approved for the exhibit. Wait out the darkness, and keep silent as the dead, lest the bartender decide to make you so.

Eventually (not too long, two to three minutes), a green floodlight will shine brightly on a door on the far wall of the bar. The bar will be bathed in green, and not just from the floodlight. Little luminescent spheres will gently drift through the room, and the barkeep will no longer be there...nor any other unassuming patron inside before.

There's no danger by this point...consider it a safe point. If you didn't finish the absinthe, you don't have to, but you might need the alcohol. Either way, take the spoon and put it in the keyhole of the green-lit portal's doorknob. It will fit perfectly, and reach the end of the keyhole with a resounding click.

Inside is a small elevator, with the most beautiful woman any mortal eyes can imagine, bathed in the green glow in just such an angle that the light refracts beyond her into the shape of wings.

The Green Fairy herself will ask you, "Going up?”, and considering all the trouble you went through, it would only make sense to say yes.

Now, you have one more hurdle to clear. She will ask you, as you cross the line from the bar to the compartment, "How would you compare Beauchamp's surrealism to that of, say, René Magritte?" For your reply, you must say, "I've come to see more than art tonight."

If you don't, the green floodlight will blow out, the doors will slam shut, and the elevator will plummet through a seemingly infinite blackness before a red light grows brighter as the elevator nears the very depths of Hell.

Now, if your elevator begins to go up, the green light will also fade, but in its place will be the cool glow of the moon. But, before you even recognize it, the elevator will reach the top of its...well, let's call it a shaft to not get too intricate.

Now, I'm not as sure about this as the rest, but I've heard that, if the Green Fairy kisses you on the cheek as she leaves the elevator, you will always be blessed with a creative inspiration: a permanent, ever-changing muse. You can't ask her, you can't kiss her; she has to do it of her own volition. If not...well, nothing, but no reason to do it anyway and anger the woman who is responsible for keeping the Beauchamp paintings safe for so many years.

You will enter, from the elevator, a turn-of-the-century parlor, with a large poster of Henri Beauchamp on the left side of the opposite wall; on the right is a door.

Taking the time to read the poster is a fairly good idea, as it explains the very significance of Monsieur Beauchamp. You see, he was a struggling surrealist in the 1920's, always making art to try to be free of all premeditation, and managed to do so. You see, after one night in a tiny, dingy one-story bar in Paris, he began to paint...patterns.

Then, on his last night of life, he kidnapped three young girls from their homes at night, murdered them, and painted his finest masterpieces in reds and yellows with the blood and bile of virgins.

He committed suicide immediately after painting exactly 13 of these.

These are behind the door.

The first six, from the left, show, from left to right: the genesis of the universe, the only true visage of God as viewable to the eyes of man, the true image of Jesus Christ, the sprawling clouds of Heaven, every Pope from the first to faces not yet recognizable, and a portrait of Jesus' appearance in his Second Coming.

The other six, on the right, show, from right to left: the cataclysm of the universe, the only true visage of Satan as viewable to the eyes of man, the true image of Judas, the sprawling flames of Hell, every human-embodied demon from the first to faces not yet recognizable, and a portrait of the Antichrist in his Second Coming.

Now, six and six makes twelve. But what of the thirteenth?

This thirteenth painting is turned around on its wall pin, the image facing the wall. The space around it is roped up at a very wide diameter, and under the flipped image is a sign, in three languages. The top is in the scriptures of the Seraphim, the bottom in the runes of the highest demonic orders, and in the middle, in Roman letters.

Now, like the kiss, I can't say this part with as much certainty, but all the same...I heard that, somehow, as he died, Beauchamp flayed his skin, his organs, his very soul, into some sort of collage. How he took his dead body and created such a horrific masterpiece, I could never say, nor would I ever dare to.

So...if you make it, maybe you can flip the canvas over and tell me sometime? You can tell me about it over a drink.