The Girl in the Rosebush: Another Experience

Note: This is a sequel to The Girl in the Rosebush

. Readers should read that story before reading this one.

My experience with that girl was months ago. I find it very strange that nothing else related to it has happened yet. The experience just came and went. It's like nothing ever happened. I am still extremely curious about that experience. I have no idea what it was.

Nothing else as weird as that has ever happened to me before. That's why I am curious to know what caused that experience. I had decided to go around my neighborhood and start asking people if they know anything about it. I did not want to tell anyone about my experience because they might think I am crazy so I just decided to ask people some questions that might help. It wasn't working out very well at first.

No one gave me the answer I was looking for. I decided to start being more specific. I decided to ask the next neighbor if there were any strange teenage girls living in the neighborhood. I knew the next neighbor very well. Her name was Grace. She is a woman who sometimes visits me on my birthdays and sometimes holidays. She is in her 50's and is a very kind and gentle mid-aged woman.

I don't feel like describing her appearance right now. When I asked her the question, she asked why I wanted to know that. I didn't want to tell her about my experience so I just told her it was complicated. She seemed to understand and she told me that she did remember having a weird experience with a teenage girl. I told her that I was interested and I wanted to hear all about it, even though I wasn't sure if she was really talking about The Girl. She let me come into her house so I could sit down and hear about it.

I sat on the couch and she sat on another couch to tell me the story. She said it happened three years ago. It was late at night and she was asleep. She was suddenly woken up by the sound of someone singing. She thought it was all in her head at first since it was very late and she was tired, but it sounded very loud and realistic. It was also coming from the living room.

She decided to go and see what it was. She slowly got out of bed and started walking slowly to the living room. The singing kept getting louder. She made it towards the living room. She didn't want to go in there immediately, so she just decided to take a small peek.

When she did, she saw that there was definitely someone in her living room. She couldn't see who it was because the person singing was lying on the couch. She could see the person's arms dangling off the side of the couch a little bit. She had to see who it was so she let out a simple, "Who's there?" The person lying on the couch stopped singing and sat up. It turned out to be a teenage girl. She told me that she was wearing a purple short-sleeved shirt. She had short black hair also.

When she and the teenage girl both saw each other, the only person who responded was the girl. She smiled and said, "Hello Grace. Are you excited for morning?"

Grace was just confused and asked, "Who are you?" The girl didn't answer and just got off of the couch. She started walking up to Grace. Now Grace could see that she was wearing a long black skirt and some black Gothic boots.

The girl just went up to her and said, "Shouldn't you answer my question first?"

Grace got mad and said, "Who are you? You shouldn't be in someone's house without their permission." The girl's smile faded. They were both silent for about one minute until the girl started giggling.

Grace just looked at the girl in confusion and slight anger. She was also snorting. She kept giggling harder and harder. She slapped Grace across the face. Grace grunted in pain and rubbed her face. She looked back up at the girl and yelled, "What on Earth is your problem?" When Grace saw the girl's face, it was terrifying. It had morphed into the scariest face you could ever see.

Her eyeballs were replaced with tiny marbles. Her nose was gone and she had a toothless grin on her face. Her mouth was totally empty. There was no teeth, gums, or a tongue. It was totally hollow. Grace was absolutely creeped out by this. The girl pulled a rose from her shirt collar and handed it to Grace. The last thing the girl said was, "Have a cheerful night." The girl quietly walked out of the front door and was never seen again.

That was all that Grace remembered. I found her experience very interesting and quite chilling. I thanked her for her information and left. I have to admit I found her story hard to believe, but she looked serious when she told me it. She also showed me the rose that the girl gave her. I am still trying to dig up information about this girl. I don't think the girl that Grace saw is the same one I saw, but I definitely find both girls interesting. 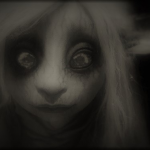