On the twenty-second of April 2005, an entity going by the name of Al1 publishes a website, claiming that he's buried £9,000 somewhere in the UK, and that it's anyone's to find.

I say he as, although the name could be short for Alexandra as much as Allan, or pronounced in a variety of other ways, we'll assume for convenience, and um... probability's sake, that this particular user is male.

So, Al1 tells we're racing to solve his clues and locate the treasure before anyone else. And his only link takes us to a kind of broken comic strip. Lines of simple pictures - some of which are repeated, and some of which aren't. At this point, the majority of viewers must have found that they could go no further. Not that many people were paying attention anyway.

But one person, at least, was watching. And three weeks later, he begins a video diary that will show his attempts to track down the money. The man goes by the name of Fortress. A fairly active user of YouTube and other popular forums. Fortress explains that as he gets nearer to the treasure, he'll be adding a video every step of the way.

If you allow the digression, solving Al1's puzzle is made much easier with knowledge of an old folk story. Thanks to Chaucer you may know it as the Pardoner's Tale. It goes like this.

The simple tale concludes that if you go looking for death, you'll be sure to find it.

"Yeah, so, I thought about it, and all these little pictures reminded me of some old kid's story. Couldn't find it. Fuck it."

"Then finally what you end up with is this: "Find Oak Tree By Yellow House London Zone Two" so that's where I'm going next. Clearly, I'm a genius, so you better give me five stars, and, yeah. Stay tuned!

Of course, very few people were tuned at all to Fortress's video. Ignored, as it must have been by the usual searches. Still, this did not discourage him, and four days later he delivers another chapter.

"Okay, so the Yellow House is some bar. And... yeah, there's a tree. Oak tree. Aha. Sweet. (notes a yellow shaped box, held closed by screws.) So this is why I have my pen knife. This is easy... SCREW YOU! Get it? You get it? (discovers a note with colored text within the box)

Ah, no... wasn't expecting the money just yet. So, another puzzle means another video."

On the third video, Fortress is home again, and allows us a closer look. It's a passage from the original text from the Pardoner's Tale, in which the old man directs the three revelers toward the forest.

"Okay, so if you look at the puzzle, and you skip the crap, you get the actual clue. 'Se ye that oak? Over there ye shall finde him there in the house on the beached Wale's tail.'... I can so do this... I can SO DO THIS."

Fortress eventually admits that he is stuck. And it's a whole two weeks before-

"Got it. So, the house on the beached 'Wale's tail', right? See how he misspelled 'whale's', yeah? So he's actually talking about... Sheep Shagger Land! So the beached whale has gotta be, this! Right? And his tail is right... here."

Grab some free satellite images, and it becomes almost obvious. The house on the beached whale's tail - a uniquely shaped rapeseed field in the area of Felynamynydd, or Yellowstone." 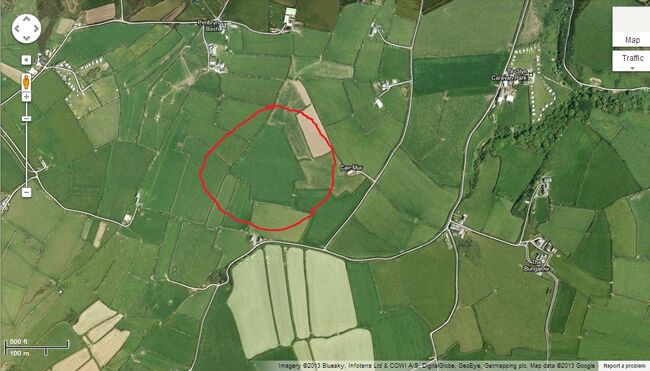 Two days later and Fortress is traveling there, outlining his journey wondering what he'll do with £9,000. It doesn't occur to him that he might be missing something. Like the strangely Technicolor render in the Chaucer's verse, or the pattern in yellow - on writing, signs, the Yellow House bar, or a man travelling to Yellowstone to a bright yellow field. Of course, no one noticed his omission. He was just another man at the shouting contest - no one noticed him at all. If you ignore everything but the yellow letters, another message appears.

Two days pass, and then... a farmer finds a dead man in the middle of his land, age late teens to early twenties, average height, dark hair, single but fatal stab wound. Two sets of footprints, evidence of a struggle. But the body, is never identified. And our problem is... our problem is that it could be either one of them.

When AL1 met his treasure seeker, maybe Fortress was frightened or troubled by whatever he said, and he overreacted. Or perhaps, when Fortress didn't return his feelings, AL1 got frustrated and became violent. But either way, the man might as well be faceless. Because no one has claimed him.

Sometimes we just don't realize what we're looking for.

Retrieved from "https://creepypasta.fandom.com/wiki/The_Internet_Story?oldid=1338963"
Community content is available under CC-BY-SA unless otherwise noted.