While honeymooning in Maine, my wife and I stopped in the picturesque town of Boothbay on a particularly dreary and rainy day. Since our planned picnic was out of the question, we sought shelter in a dilapidated little antique store near the harbour. While my wife inspected the large chests and side tables near the door, I eagerly examined the antique tools and seafaring equipment inside the glass sales counter at the back. Being a collector of optics and mariner's instruments, I hoped to find a sextant, or perhaps an old leather-bound telescope.

A particularly interesting piece caught my eye. It appeared to be a heavy brass flashlight, bearing a worn brown patina but remarkably modern in design. I asked the shopkeeper, but he could only tell me it was found in the same old sailor's chest as several of the compasses and the sextant also on display. He inquired as to whether I would like to purchase it for five dollars, or perhaps have it for free. "It's worthless to me, nobody wants it." When I remarked about the price, he sighed wearily, and then reached into the cabinet and retrieved it for me.

The craftsmanship was wonderful; quite durable and apparently hand-made, perhaps somewhere in Europe. Worn lettering indicated it might be German, or perhaps Austrian in origin. I twisted the bulb housing and a weak red beam swept out. Poking it into a dark corner of the shop, I was greeted with fantastic monotone swirls, moving and entwining with each other like a pit of eels. As I stared further into this unusual projector-kaleidescope, my fanciful mind invented ghoulish faces and sinuous, gnarled tendrils. Shutting the device off, I turned excitedly to the shopkeeper. 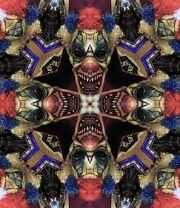 "Fantastic!" I said. "It must have an oil filter of sorts in front of the lens! I have two Victorian kalediscopes, but none that are illuminated like this."

"You don't get it, do you? Nobody gets it. They all come back to return it after a while." The shopkeeper leaned on the counter and I could see that he was breathing heavily and perspiring. "They all think it's some sort of trick… till they start seeing it when the light's off."

"That ain't no projection, mister. That damned thing, that light, it ain't makin' up those creatures. It's just lettin' your eyes see what's already there."

Retrieved from "https://creepypasta.fandom.com/wiki/The_Kaleidoscope?oldid=1417288"
Community content is available under CC-BY-SA unless otherwise noted.