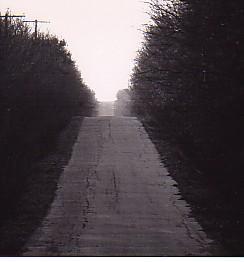 In Corona, California there once was a road known by most locals as the Never-Ending Road. Specifically, the road's true name was Lester Road. Now, over twenty years later, the landscape of Corona has changed, and the Never-Ending Road is no more. However, years ago, Lester Road was an unlit road that people claimed became a never ending road when driven at night. The people who made such a drive were never seen or heard from again.

The legend became so well-known that people refused to even drive Lester Road during the day. One night, like many teens my age, I drove up Lester Road, but only a short distance, and in my headlights it did look like it went on forever. Frightened, I quickly turned around, because if I continued up the road, I thought I might never return again.

Perpetuation of the legend convinced local law enforcement to investigate. Lester Road took a sharp left turn at its end, and there were no guard rails. Beyond the curve lay a canyon, and on the other side of the canyon was another road that lined up so well with Lester Road that when viewed from the correct angle, especially at night, the canyon vanished from sight, and the road seemed to continue on up and over the hill on the other side of the canyon. Upon investigation of the canyon, dozens of cars were found, fallen to their doom, with the decomposing bodies of the victims still strapped to their seats.