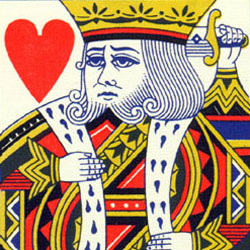 Modern playing cards are filled with layers of meaning and symbols that can be traced back centuries. The four kings, for example, are based on real rulers: the king of diamonds represents the wealthy Julius Caesar; the king of clubs is the brutal Alexander the Great; the king of spades represents the strong but kind David of Israel; and the king of Hearts represents the emotionally disturbed Charles VII of France. It is this king that we will be dealing with today. It should also be noted that Charles was the only one of the four who was actually there to see the day his face was printed on a playing card, which may rationalize why he acted apart from the others.

Charles’ visage was put on the king of hearts at the very beginning of his rule, but he never really got a chance to come into contact with playing cards until many years later when he became very ill with a fever and was informed that he would be bedridden for the rest of his life. It was during this period that Charles began learning card games to pass the time, such as an early version of black jack, “vingt-et-un” (twenty-one).

Charles lay in his bed for two years, constantly fiddling with the cards and always getting weaker. As time passed, there were reports that Charles had begun obsessing over the idea that the king being the thirteenth card in a suit was causing him bad luck. He talked about how he was starting to see the number pop up everywhere and that he was close to figuring out its secret. Of course, his ramblings were blamed on the fever, and by the end of the second year, he had been declared insane and his son Louis XII took over the throne.

One day, several months after the end of his reign, one of Charles’ physicians went to his chamber to find the frail old man standing in the middle of the room wielding a large sword. Before the doctor could react, the king said, “Ils m’ont montré la vérité de treize, et il n’est pas signifié pour les yeux mortels,” which roughly translates to, “They have shown me the truth of thirteen, and it is not meant for mortal eyes.” Without hesitation the king proceeded to ram the blade in through the left side of his head (between the ear and temple) until it came out the other side. He wavered a moment before collapsing to the floor, dead.

After the incident was announced and it was made public that the king had gone mad, the image of Charles on the King of Hearts was altered to show his suicide. Although the picture is now shown significantly less graphically, the image of Charles thrusting the sword into his skull can still be found on modern day playing cards. Perhaps the strangest part of the whole story, however, is the day that Charles chose to kill himself: 7/6/1462. Whether it was intention of the king, the facts that 7 + 6 = 13 and 1 + 4 + 6 + 2 = 13 can only be explained as coincidences.

Credited to John ♠
Retrieved from "https://creepypasta.fandom.com/wiki/The_Suicide_King?oldid=1417642"
Community content is available under CC-BY-SA unless otherwise noted.